All Audio The Deep-Sea Podcast
Episode 6 of 18

Our world is rapidly changing. As we move away from fossil fuels and our use of electronics increases, demand is climbing for a handful of metals key to the manufacture of modern technology. Mining the deep sea may meet these demands but is probably the most contentious issue the community is facing
Category: Science
Publish Date: Dec 04, 2020
Tagged in this Audio:
More
Jump to Full Description
Snippets are a new way to share audio!
You can clip a small part of any file to share, add to playlist, and transcribe automatically. Just click the to create your snippet!
Snippets: Clips of 006 -Deep-sea mining special that people like
Add to Playlist
Share 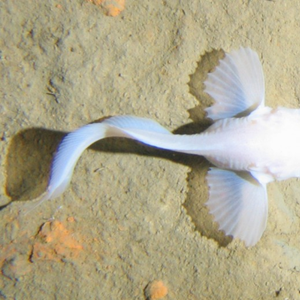 Scientists
04:57:02 2/5/21 5 audios
Up Next
Full Description
Back to Top
Our world is rapidly changing. As we move away from fossil fuels and our use of electronics increases, demand is climbing for a handful of metals key to the manufacture of modern technology. Mining the deep sea may meet these demands but is probably the most contentious issue the community is facing right now. Is there a net benefit for the deep sea; funding research and understanding, addressing climate change, and encouraging developing nations? Or is the deep sea too fragile and too unknown to be responsibly exploited?We bite off far more than we can chew by taking on this issue in a deep-sea mining special episode. Luckily, we have some guests we can call on to help us understand the issue. Professor Jeffrey Drazen of University of Hawai`i at Manoa explains just what deep-sea mining is and its ecological impacts. We then speak with Michael Lodge, secretary-general of the International Seabed Authority (ISA). The ISA, comprised of 167 member states and the European Union, regulates and controls all mineral-related activities in the open ocean – that’s the majority of the planet!We also have current news and a chat with Don Walsh, who of course it turns out, has first-hand experience with the complexities of mining in the ocean. You can submit your own ‘tails from the high seas’ about an experience you have had offshore or pose us a question on:podcast@armatusoceanic.com Theme – Hadal Zone Express by Märvel (http://marvel.nu/) LinksECO Magazine Deep-Sea Heroes: http://digital.ecomagazine.com/publication/?i=683954&ver=html5&p=22Scary bigfin squid video: https://youtu.be/L8xXnVkOGsABigfin squid paper: https://journals.plos.org/plosone/article?id=10.1371/journal.pone.0241066Eel swarm: https://www.sciencedirect.com/science/article/pii/S0967063720302107ISA website: https://www.isa.org.jm/DeepData: https://www.isa.org.jm/deepdataUNESCO report: http://whc.unesco.org/en/news/1535/#deepseamining #deepsea #mining #ManganeseNodules #manganese #PolymetallicNodules #Polymetallic #ISA #InternationalSeabedAuthority #MichaelLodge #LawOfTheSea #HighSea #InternationalLaw #conservation #EnvironmentalImpact #seamount #HydrothermalVent #ProtectedArea #ProtectedHabitat
Snippet Transcripts

What is deep-sea mining?
04:32-08:25
deep sea mining something we're gonna talk about quite a lot of this episode. We've even got two guests this time. Not one but two. That's because deep sea Mini is a big subject and we're not going to delve too deep into it because you could probably do an entire podcast on deep sea mining alone. It has all sorts of elements to which are both interesting, fascinating, encouraging tragic every every color of the rainbow. To be honest. For those unfamiliar with deep sea mining, it's a it's where large areas of poly metallic modules are active for extinct hydrothermal vents create these for called massive sulphide deposits. And these contain lots of interesting and particularly valuable metals such as silver, gold and copper, manganese, cobalt, zinc. All these metals that we need as a civilization to satisfy a rising demand and technology. That's the bottom line is we need stuff and their stuff on the sea floor. The problem is to get the stuff on the sea floor, we destroy the sea floor. And that's where there's a lot of this contentiousness comes from. So they're basically in a nutshell, there are three different types of, of mining, which I'm going to use Tomlin lee as a beautiful assistant to demonstrate this through a series of analogies. So the first is sucking up Paula metallic modules, or let's call them manganese nodules from abyssal plains. Right, So manganese nodules are basically fist sized black, what looked like rocks just lying on the sea floor and he's highly valuable. So the process of that is if you imagine Tom has been in the supermarket and he's just bought two big bags of vegan potatoes and big paper bags and he's walking out into the rain on a wet Newcastle afternoon and the rain gets to his paper bag and all these vegan potatoes end up strong across the car park. If I happen to be coming along in my little street cleaning vehicles in, gingerly suck them all up in my little machine, that's essentially what they're doing there, except it's probably 1000 times more aggressive than that, so lots of little balls, lots of questions about that, don't worry about it, Just move on tom just okay, alright, another another one, be like stripping cobalt cross from siemens seamounts or the thousands of seamounts, tens of thousands of siemens, A lot of them have got high cobalt concentrations on them. So the way to do that is if you imagine I was doing a an art project in my art yogurt and I needed some metal and I went into Tom's house and just started ripping there, the exterior off of his Austin Allegro, uh took them, took them back to my house to build my art and my art that would be analogous to see mountain cobalt mining right? Alright, tom That sounds about right, I give up. Yeah, sure, yeah, extracting Paula metallic sulfides from hydrothermal vents, This little bit of forestry, hydrothermal vents for big tall things, I guess, you can go and take rocks around it, but so it's basically, if I always wanted to build something that would go around Tom says, and just cut the trees down and take them basically in a nutshell. It's all about potatoes and legros and trees. This is why we need someone else to explain deep sea mining and we'll get to that in a minute. An important point is that many sea floor minerals are in great demand for use and things like smartphones, supercomputers, electric cars, solar panels, wind farms and all sorts of other new technologies. And cobalt, for instance, is branded as the world's primary technology metal and it's an element increasingly needed in the production of lithium ion batteries to power technologies like smartphones and electric cars. Now going back to the news, it was, it was only last week I think that Boris johnson came out with this plan that put a ban on new petrol and diesel cars in the UK from 23 everything's got to go to electric. That's great news for greenhouse gases and air pollution and everything else. But then what it does do is say, right, we need a lot of cobalt where we're gonna get that from the deep sea mining raises questions about environmental impact. Obviously when you remove the sea floor, the greatest environmental impact is probably the fact that sea floor is not there anymore. And that can be devastating if you live on the sea floor again, that's why we need to bring someone else into explain this in better detail. But we're looking at Areas which can be as deep as 5000 m, you know, really large scale disruption of ecosystems. We don't entirely understand. I mean, some of these things that it goes back to this whole concept of human scale that we talked about before, like there are some places in the Pacific certainly, which are earmarked for mining, which are just absolutely massive. Many scientists have argued that seabed mining should just not be permitted or at best cautiously permit.
Up Next
Add to playlist
New playlist