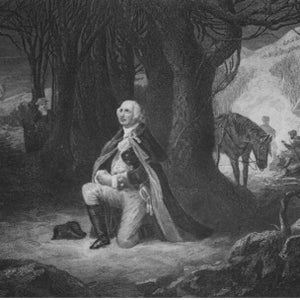 Dr Bond inoculated Washington's troops: "Finding the Small pox to be spreading much and fearing that no precaution can prevent it from running through the whole of our Army, I have determined that the troops shall be inoculated. This Expedient may b
Category: News & Politics
Publish Date: Oct 14, 2021
Tagged in this Audio:
More
Jump to Full Description
Snippets are a new way to share audio!
You can clip a small part of any file to share, add to playlist, and transcribe automatically. Just click the to create your snippet!
Snippets: Clips of 1763: 7/8 Patrick O’Donnell, #UNBOUND: The Indispensables. The complete, 80-minute interview, June 26 & October, 2021 that people like

There are currently no playlists containing this audio.
Add this audio track to one of your playlists
Add to Playlist
Up Next
Full Description
Back to Top
Photo:  George Washington praying at Valley Forge

Dr Bond inoculated Washington's troops: "Finding the Small pox to be spreading much and fearing that no precaution can prevent it from running through the whole of our Army, I have determined that the troops shall be inoculated. This Expedient may be attended with some inconveniences and some disadvantages, but yet I trust in its consequences will have the most happy effects. Necessity not only authorizes but seems to require the measure, for should the disorder infect the Army in the natural way and rage with its usual virulence we should have more to dread from it than from the Sword of the Enemy. Under these circumstances I have directed Doctr Bond to prepare immediately for inoculating in this Quarter,1 keeping the matter as secret as possible, and request that you will without delay inoculate All the Continental Troops that are in philadelphia and those that shall come in as fast as they arrive."*


7/8  The Indispensables: The Diverse Soldier-Mariners Who Shaped the Country, Formed the Navy, and Rowed Washington Across the Delaware,


From the bestselling author of Washington’s Immortals and The Unknowns, an important new chronicle of the American Revolution heralding the heroism of the men from Marblehead, Massachusetts

On the stormy night of August 29, 1776, the Continental Army faced capture or annihilation after losing the Battle of Brooklyn. The British had trapped George Washington’s forces against the East River, and the fate of the Revolution rested upon the shoulders of the soldier-mariners from Marblehead, Massachusetts. Serving side by side in one of the country’s first diverse units, they pulled off an “American Dunkirk” and saved the army by transporting it across the treacherous waters of the river to Manhattan.

In the annals of the American Revolution, no group played a more consequential role than the Marbleheaders. At the right time in the right place, they repeatedly altered the course of events, and their story shines new light on our understanding of the Revolution. As the acclaimed historian Patrick K. O’Donnell dramatically recounts, beginning nearly a decade before the war started, and in the midst of a raging virus that divided the town politically, Marbleheaders such as Elbridge Gerry and Azor Orne spearheaded the break with Britain and shaped the nascent United States by playing a crucial role governing, building alliances, seizing British ships, forging critical supply lines, and establishing the origins of the US Navy.

The Marblehead Regiment, led by John Glover, became truly indispensable. Marbleheaders battled at Lexington and on Bunker Hill and formed the elite Guard that protected George Washington. Then, at the most crucial time in the war, the special operations–like regiment, against all odds, conveyed 2,400 of Washington’s men across the ice-filled Delaware River on Christmas night 1776, delivering a momentum-shifting surprise attack on Trenton. Later, the Marblehead doctor Nathaniel Bond inoculated the Continental Army against a deadly virus, which changed the course of history.

*  The Marblehead doctor Nathaniel Bond had a problem. During the Battle of Lexington and Concord, in obedience to his Hippocratic Oath, he had treated British soldiers. For performing his duty as a doctor, he was falsely accused of being a Loyalist and had his life threatened by an angry mob.