Your changes have been saved
All Audio Let's Go To Court!
Episode 191 of 192 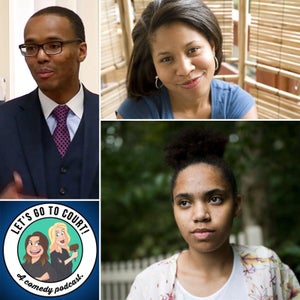 Bresha Meadows had run out of options. She’d tried talking to the police. She’d tried running away from home. She tried everything she could think of to get away from her abusive father. Nothing seemed to work. So, in July of 2016, when she was 14 years old, Bresha took her father’s gun and killed h
Category: True Crime
Publish Date: Oct 13, 2021
Tagged in this Audio:
More
Jump to Full Description
Snippets are a new way to share audio!
You can clip a small part of any file to share, add to playlist, and transcribe automatically. Just click the to create your snippet!
Snippets: Clips of 191: Bresha Meadows & Nailah Franklin that people like

There are currently no playlists containing this audio.
Add this audio track to one of your playlists
Add to Playlist
Up Next
Full Description
Back to Top
Bresha Meadows had run out of options. She’d tried talking to the police. She’d tried running away from home. She tried everything she could think of to get away from her abusive father. Nothing seemed to work. So, in July of 2016, when she was 14 years old, Bresha took her father’s gun and killed him in his sleep.


Then Kristin tells us about Nailah Franklin, a pharmaceutical sales rep who seemed to be living the good life. She had a big, loving family, close friends, and a new relationship with a handsome lawyer. There was just one thing that wasn’t right -- her douchebag ex-boyfriend, Reginald Potts.


And now for a note about our process. For each episode, Kristin reads a bunch of articles, then spits them back out in her very limited vocabulary. Brandi copies and pastes from the best sources on the web. And sometimes Wikipedia. (No shade, Wikipedia. We love you.) We owe a huge debt of gratitude to the real experts who covered these cases.

YOU’RE STILL READING? My, my, my, you skeezy scunch! You must be hungry for more! We’d offer you some sausage brunch, but that gets messy. So how about you head over to our Patreon instead? (patreon.com/lgtcpodcast). At the $5 level, you’ll get 25+ full length bonus episodes, plus access to our 90’s style chat room!
Up Next
Popular Playlists
Best Yoga Podcasts: Listen & Learn New Poses Sour Shoe's Greatest Moments on The Howard Stern Show Listen to: Top 15 Funniest Barack Obama Quotes 9 Game Design Podcasts Every Game Designer Needs to Hear 7 Podcast Episodes About The Golden State Killer That Will Keep You Up at Night David Parker Ray & Shocking Audio of the Toy Box Killer You Need to Hear Best UFO Podcasts That Will Abduct Your Mind Controversial Joe Rogan Experience Episodes Audio Wack Packer Beetlejuice Best Moments on The Howard Stern Show Best NoSleep Podcast Episodes To Terrify You Sexy ASMR Audio to Turn You On
Popular Categories
ASMR Business & Tech Cannabis Fashion & Beauty Gaming History Home & Garden Kids & Family Spirituality Travel
Add to playlist
New playlist