Listen to everything you didn't know about the filibuster on Vurbl. In this clip, political scientist and professor Sarah Binder explains the power and function of the filibuster.
Category: News & Politics Political Science
Upload Date: Aug 11, 2020
Jump to Full Description Transcript
Snippets are a new way to share audio!
You can clip a small part of any file to share, add to playlist, and transcribe automatically. Just click the to create your snippet!
Snippets: Clips of Audio: Listen to Political Scientist Sarah Binder Explain the Filibuster that people like 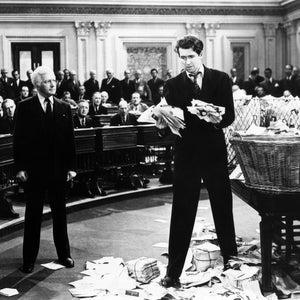 What is the Filibuster? Listen & Learn: An Audio Guide
17:36 8/11/20 6 audios
Up Next
Full Description
Back to Top
Listen to everything you didn't know about the filibuster on Vurbl. In this clip, Sarah Binder, senior fellow of Governance at the Brookings Institution and professor of political science, explains the power and function of the filibuster.
Transcripts
Back to Top
the filibuster is basically extended debate. And because the Senate doesn't have a rule that allows majority to cut off debate, write the rules. The Senate really allow a single senator or a large group of senators to keep talking, to offer amendments to hold the floor until they crumble, or until the majority get 60 votes to cut them off of minority party members as well as members of majority. They all think the filibuster very useful, and they use it for all different purposes. Often times. It is sort of this classic you the filibuster to block legislation on going forward. Ah, and that's certainly how the minority has used the filibuster to block all sorts of issues of last decade in decades. Other times, minorities use the filibuster, though, to try to slow down the majority to try to get them to adopt their amendments or to change their views and force him to compromise. It can also simply force the public to pay attention to what the minority party is saying, or to what individual senators air saying. So think about Senator Jim Bunning, who single handedly blocked our extension of unemployment benefits well, turns out wasn't such popular position, even amongst Republicans. But it stopped the Senate and it took everybody's attention to really a substantive argument that Bunny was making about how we're going to pay for these types of benefit. It's.
Up Next
Popular Playlists
Best Yoga Podcasts for Experienced Yogis & for Beginners (Audio) Sour Shoe's Greatest Moments on Howard Stern Listen to: Top 15 Funniest Barack Obama Quotes 9 Game Design Podcasts Every Game Designer Needs to Hear 7 Podcast Episodes About The Golden State Killer That Will Keep You Up at Night David Ray Parker & Shocking Audio of the Toy Box Killer You Need to Hear 8 UFO & Aliens Podcasts That Will Abduct Your Mind Audio Cheat Sheet To The Sexy Liberal Podcast Network Controversial Joe Rogan Experience Episodes Audio Wack Packer Beetlejuice Best Moments on The Howard Stern Show 12 Best Episodes of the NoSleep Podcast to Keep You Up at Night
Popular Categories
ASMR Business & Tech Cannabis Fashion & Beauty Gaming History Home & Garden Kids & Family Spirituality Travel
Add to playlist
New playlist