Your changes have been saved
All Audio Football Ramble Daily

Share
station description The Football Ramble emerged from London towards the end of 2007 as a genuinely refr... read more 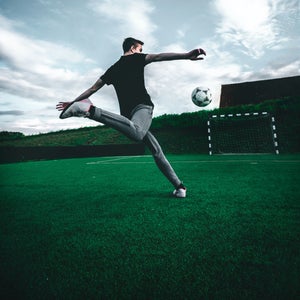 Soccer Podcasts You Should Listen To Even When It's Not the World Cup
05:18:40 10/14/20 10 audios
Up Next
Full Description
Back to Top
Listen now to snippet “Liverpool in Denmark” as Football Rample Daily chat about the team debuting on a bad night and compare the game to Oliver Twist.
In 2007, The Football Ramble was born out of Luke Moore, Pete Donaldson, Marcus Speller and Jim Campbell’s passion for the most popular sport in the world—as well as a shared inability to take themselves too seriously. Since then, the boys have come a very long way: from a best-selling book to sold out live shows. Now, with the return of football post-lockdown, the Football Ramble brings you daily episodes of equal parts insight and hilarity.
Transcripts
Back to Top
against that team. Most Saleh opener within a minute makes him Liverpool's top scorer in the history off the modern Champions League and also the glorious off the line clearance from for Beano. That was delicious. Um, Sally Old Queen Kelleher concedes, a penalty with far Andreia. But the hardest thing about all of this is pronouncing that man's name on. I'd really enjoy the way you do it. I know you got a lot of credit for online for doing it right. Capers a lot of working behind the scenes with that kind of stuff. So good. Good on you. I thought this game waas it felt to me like I'm gonna take you a little bit down memory lane of I'm a very, very quickly. So a good friend of mine is a fan of wicked wanderers on Officer sport Portsmouth. On a few years ago, both teams were really struggling badly in League two on. There were both fan owned on. We used to go to the game each other's home game ground to watch the game. When I went to Adams part to watch Wiccan reports was once on, it was so dull on dso I want to say dystopian, but I think the word I would use for it, which is bleak. It was just a bleak midweek league to game in the winter between two bankrupt clubs. I'm not having you compare the lorry. Let may, but my friend and I started referring to the ports of the wicked. Was the death of football Darby, right? No, I'm not suggesting that either of these teams were at that poor level, but just the idea of illustrious historic club like Liverpool going to play a dead rubber in Denmark in the middle of winter with no fans, the players aren't even gonna get to see the beautiful country of Denmark on it be like that. It's a load of our and then they just travel straight back again. It just made me quite sad on. I wonder if anyone's with me on. That is not a sad he had. He was the youngest plate up. It's a great night for Champions League. Great night. Luke Moore was just pissing all over. I think that made it a little bit worse, actually, because I kind of a kind of agree with you, have your debut for one of the world's greatest clubs on the shittiest night of all time. Would you take it? Yeah. Yeah, probably. Would There much lovely as well, but they don't see any of it. That's the point. Yeah, true. But the other part of it that I thought was a bit off was that because they played so many kids, just seeing their breath in the air as well. Felt a little bit. Oliver Twisty Andi. Andi. To my mind, Jurgen Klopp is a little bit Fagan, isn't he? What? Yeah, I didn't like it. I don't like seeing young kids breath. Why was Clarkson wearing like, a little a little peaked hat? Well, little rips, trousers Give him a kit. Given full gloves. Yeah, fingerless gloves like beetles. A massive fire of the fingerless gloves, by the way, is that it's always it's always best for purchase. Or is he gonna need fingers on those gloves I bought? I bought some quite robust fingerless gloves for the press boxes, but they're too robust, so I can't get
Up Next
Popular Playlists
Best Yoga Podcasts for Experienced Yogis & for Beginners (Audio) Sour Shoe's Greatest Moments on Howard Stern Listen to: Top 15 Funniest Barack Obama Quotes 9 Game Design Podcasts Every Game Designer Needs to Hear 7 Podcast Episodes About The Golden State Killer That Will Keep You Up at Night David Parker Ray & Shocking Audio of the Toy Box Killer You Need to Hear 8 UFO & Aliens Podcasts That Will Abduct Your Mind Audio Cheat Sheet To The Sexy Liberal Podcast Network Controversial Joe Rogan Experience Episodes Audio Wack Packer Beetlejuice Best Moments on The Howard Stern Show 12 Best Episodes of the NoSleep Podcast to Keep You Up at Night
Popular Categories
ASMR Business & Tech Cannabis Fashion & Beauty Gaming History Home & Garden Kids & Family Spirituality Travel
Add to playlist
New playlist