Your changes have been saved
All Audio ‎Kayatic Dreams Podcast 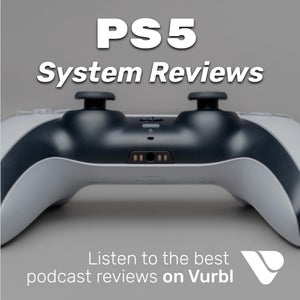 Gaming Reviews: PS5
01:45:15 12/31/20 18 audios
Up Next
Full Description
Listen now to snippet “PS5’s Astro’s Playroom’s Impressive Controller Demonstration” from Kayatic Dreams Podcast. The game is an emotional, innovative experience.
A Topical podcast covering everything and anything in news, music, sports, comics, movies, tv, books. You name it most likely I’ll speak about it. Join me as I share my Kayatic thoughts here at Kayatic Dreams Podcast.
Audio Transcription
pop pot on the built in game believe it's playroom or something to that effect. It's basically designed to teach you the ins and outs off the PlayStation five. It's a really cool game, but what was shocked me the most was the PlayStation five control. There's nothing like it on the market, period, period. The control alone probably doesn't seem like a big aspect of a system that will make me really choose between buying it or not. But the potential for the way these games are gonna feel the potential for the ways they could immerse you in the experience. This little demo game was just a tip of the iceberg of the possibilities that they got with this new, uh, PS five control. Super impressed writers the gate, you know, you feel the vibrations, you feel the roles you feel, the little taps of your feet, you every and anything around your environment. You feel it in your hands and you feel it also go from one section of the control to the other. So it is not just a general vibration that we've been dealing with the past couple of years. Well, throughout the entire time, with the rumble feature. You know, ever since it came out, it's just been a simple, you know, either long or short bursts, and that's it. This actually makes it feel like the control is alive. Um, for example, they had this portion with a little PlayStation characters that they made for this. They all got sucked into the control, and you actually feel them dropping the control. And as you move the control, you feel them individually rolling around inside. It was an amazing experience. And honestly, outside of actual game software, the control itself was Was enough for me toe confirm I was gonna get it regardless. Let's be honest. But it was enough for me to confirm like this is gonna be the innovator. This is gonna be the game changer off the generation. The haptic feedback control is amazing. So you know it happens like that. You know, they make you feel like you're actually pulling objects. You feel the strain of the ropes. You feel the pool of like a bow and arrow. You feel the the springs in the jump like you. There's so many things they included in this I would implore anyone booting up a PS five for the first time and going through the catalog, downloaded their games, do yourself a favor and play the game. It's actually really fun. It stands alone on itself, outside of being a you know, glorified material. It's actually more than that. You know, it's a good video game in itself, uh, material. And also, if you're someone like me who's been through every generation of PlayStation, it gives you good nods to the past. Good nostalgia, you know, hits, pulls on those a little emotional heartstrings that you have growing up and experiencing the PlayStation and evolving with it. So, you know, great job on that demo.
Up Next
Popular Playlists
Listen to: Top 15 Funniest Barack Obama Quotes Audio: The Best of CBS Radio Mystery Theater 7 Podcast Episodes About The Golden State Killer That Will Keep You Up at Night Sour Shoe's Greatest Moments on Howard Stern Controversial Joe Rogan Experience Episodes Audio Audio of the 10 Funniest Presidential Quotes of All Time 8 UFO & Aliens Podcasts That Will Abduct Your Mind Try Out These 10 Podcasts About Cults (But Don't Drink Any Kool-Aid)
Popular Categories
Audiobooks & Stories Comedy Documentary Entertainment Health & Wellness Health Conditions Kids & Family
Add to playlist
New playlist