Your changes have been saved
All Audio The Doctor Paradox

Highlight Clip of The Doctor Paradox: Being a Writer and a Doctor

From Audio: Audio of The Doctor Paradox: Being A Writer & A Doctor

In this snippet, Dr. Louise Aronson offers a captivating anecdote for engaging with your purpose as told by one of her patients. Taking life by the reigns leads to greater happiness.
Category: Science
Upload Date: Sep 25, 2020
Snipped By:
Share

Lost Audio Station
Jump to Full Description Transcript
Playlists that Highlight Clip of The Doctor Paradox: Being a Writer and a Doctor appears on.
Share 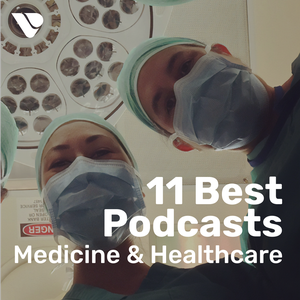 11 Best Medical & Healthcare Podcasts to Know During Turbulent Times
07:07:51 9/25/20 23 audios
Up Next
Full Description
Back to Top
For Dr. Louise Aronson, writing is a mode of creativity that leads to happiness as it a means for her to communicate and reflect on the personal. Similarly, her patients discuss taking life into your own hands as way of self-fulfillment as they chart the uncanny ways in which they navigate old age and the threat of dying.
Transcripts
Back to Top
right, We actually hear it. UCSF We had a physician die on the job, which sounds awful, except for that he was 104 and he kept coming toe work because he said that was what was most meaningful in his life and it gave him a reason to get up. And so he got up for 104 years, which is incredible. Um, you know, and that's probably not the only explanation for his longevity. But when when they look at, there are various studies like the centenarian study, and people who live a long time do have a sense of meaning. And again it, you know what gives them that really varies. But they have a sense of humor and a sense of purpose. So as somebody who works obviously very close with the the geriatric community, the what do you think have been some of the key pearls of wisdom that these people have imparted on you over the years? If there's been any particular patients or stories that you have felt has been a great example, er off meaning mm, There are so many, but I think what always impresses me most is there are, you know, and you never know until you get there. Which side of this you're gonna fall on? Of course. Um so So I don't mean toe say this by way of judgment, because who knows what I'll dio. I hope I'll do one thing. It will become clear which. But there are people who Aziz, they grow older, lose the ability to do certain things. They may end up needing a walker or, you know, needing help because they can't hear something well enough. And some people in the face of that will just stop going out or stop interacting. Uh, and others say so I wanna Walker doesn't mean I can't go to the opera or go to the movies or go to a restaurant. And off they go, and those latter people are significantly happier and more engaged. Um, so I think that really makes a difference. And I like the story of one of the patients who actually made me into a geriatrician. I met her in her late eighties and cared for her until her death in her sort of late middle nineties. But as she was, you know, maybe 94 or five. She was going to the bathroom. She still lived alone. Uh, you know, had a little help once a week. But she was going to the bathroom one night or, I don't know. She was really sleepy, and she somehow fell between the toilet and the wall. It was not a big bathroom. And she's out there and she just started reciting all singing all the songs she knew and reciting everything she knew. And she got herself through the night and she, you know, the caregiver came in the morning and helped her up, and she was in fine spirits and she'd actually learned that she remembered so much more than she thought she would and was very pleased with the whole thing. Just about Wow, it's incredible on dso some of having that attitude. I've actually been trying to adopt it even now because I think life changes and at this period of intense stress in medicine and one could argue the world, um, to remember those things and how being a certain way or trying to be a certain way can actually change your experience of something that may appear fixed. Um, without
Up Next
Popular Playlists
Best Yoga Podcasts for Experienced Yogis & for Beginners (Audio) Sour Shoe's Greatest Moments on Howard Stern Listen to: Top 15 Funniest Barack Obama Quotes 9 Game Design Podcasts Every Game Designer Needs to Hear 7 Podcast Episodes About The Golden State Killer That Will Keep You Up at Night David Ray Parker & Shocking Audio of the Toy Box Killer You Need to Hear 8 UFO & Aliens Podcasts That Will Abduct Your Mind Audio Cheat Sheet To The Sexy Liberal Podcast Network Controversial Joe Rogan Experience Episodes Audio Wack Packer Beetlejuice Best Moments on The Howard Stern Show 12 Best Episodes of the NoSleep Podcast to Keep You Up at Night
Popular Categories
ASMR Business & Tech Cannabis Fashion & Beauty Gaming History Home & Garden Kids & Family Spirituality Travel
Add to playlist
New playlist