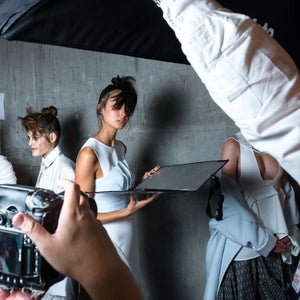 Get Tressed With Us! - Us Weekly Hair, Beauty and Style
Jump to Full Description Transcript
Playlists that Skincare and Makeup Products to Achieve Alicia Key's Glowy Skin appears on.
Share 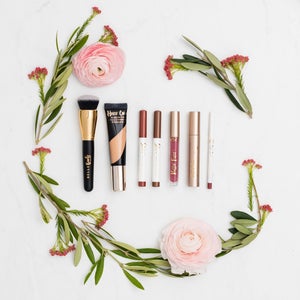 Style and Beauty Tips From US Weekly's 'Get Tressed With Us' Podcast
12:41 10/6/20 6 audios
Up Next
Full Description
Back to Top
Makeup artist, Romy Soleimani, talks about how to use beauty products like primers, setting powder, and skincare serums to accentuate facial features in order to achieve Alicia Key's coveted glowy skin from within look.
Transcripts
Back to Top
So tell us how many different makeup looks did she have? She had five outfits. Did you tweak the makeup? Five times, Very subtly, Very subtly. So the first look. I mean, obviously we started with with the skin, right? That's like that's the whole process. There's like massage. There's, you know, oftentimes there's a lot of tools that are you. What do you use, like, Do you? Would you say that massage is the most important step to getting that glowy complexion like it even starts before makeup? Oh, for sure. Massage, skin care. All of that is very important. And it really depends on who you're working with and what their skin is like. And what's the circumstance? I'm not gonna put on tons of heavy moisturizers before she's going on television because I don't wanna put tons of powder on, so I don't wanna fight it, You know what I mean is so it's not just like a 111 vibes that you know for everything. It's really it's really kind of customizer Taylor to the exactly Yeah, exactly. Exactly. So eso, you know, obviously worked in her skin. You know, I do some coverage that we don't like to talk about but like that but everybody for no makeup makeup, You gotta have a little bit of coverage. What? What kind of formula do you use on her for? Like a no makeup makeup? Look, you know, I I would start with, um, something like, you know, I like to start on her with maybe in August in this Bader primer. Skip the mate. Skip the skip, Skip a moisturizer. In this situation, she doesn't have very dry skin. So I use that primer I used the Augustine, his Bader or August Augustine is Bader August rich the rich cream. And then I used the Victoria Beckham by Augustine. A primer on top of it, right? Right. But she doesn't have to use any. Okay, cool. Just a primer. So just the primer under the makeup, because I really, um, wanna keep it really minimal. And then I use, like, very creamy concealers and a mix of a million different things. But I and then I use like there's a serum that I love from this Korean company called Wall Myung. OK, I love them on they have this like serums spray. It smells amazing. it feels amazing, but it gives like a gorgeous glow. Andi, it kind of I love kind of mixing skincare with makeup, skin care with makeup that that's how I do blow I'm not into, like, you know, obviously I use some highlighters for sure, but a lot of it is like for me, it's activated by skin care because I don't want it to look like, Oh, look at all that. Those, uh, yeah, well, you even had, even if yeah, even if I use cream highlighter, I'm going to tap it. I will spray a beauty blender with the wall young and press it into it. That's the kind of way it up, and I spray that while the young all over her body, like on deck elite. And so it has like this gorgeous kind of hydrated glow. But not as you send Travis like, not a greasy glow, not an oily glow. There's like there's so many levels. And then I do add a little bit of powder because again she is on television. Um, I'm currently obsessed with the Lemerre Powder O s so fine. It's so fine. It doesn't look chalky or cakey. I mean, you know, I work with some actresses that are like, you know, maybe they're a little older and they're afraid of powder. I too, I'm afraid of e don't. Yeah. When all these HD powders that end up looking like e awful. So I just do it very, you know, very precision. And I kind of almost work it into the skin, So it it almost blind.
Up Next
Popular Playlists
Best Yoga Podcasts: Listen & Learn New Poses Sour Shoe's Greatest Moments on Howard Stern Listen to: Top 15 Funniest Barack Obama Quotes 9 Game Design Podcasts Every Game Designer Needs to Hear 7 Podcast Episodes About The Golden State Killer That Will Keep You Up at Night David Parker Ray & Shocking Audio of the Toy Box Killer You Need to Hear 8 UFO & Aliens Podcasts That Will Abduct Your Mind Audio Cheat Sheet To The Sexy Liberal Podcast Network Controversial Joe Rogan Experience Episodes Audio Wack Packer Beetlejuice Best Moments on The Howard Stern Show 12 Best Episodes of the NoSleep Podcast to Keep You Up at Night
Popular Categories
ASMR Business & Tech Cannabis Fashion & Beauty Gaming History Home & Garden Kids & Family Spirituality Travel
Add to playlist
New playlist