Snippet of The Beerists Craft Beer Podcast: 216 - Hard To Get

From Audio: Audio of The Beerists 216 - Hard To Get

Alfred Varela
Jump to Full Description Transcript
Playlists that Snippet of The Beerists Craft Beer Podcast: 216 - Hard To Get appears on.
Share 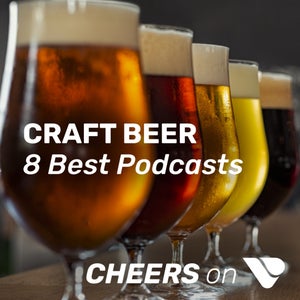 Snippets from the 8 Best Craft Beer Podcasts
34:29 9/28/20 8 audios
Up Next
Full Description
Back to Top
Host John Rubio and his guests will try 5 legendary beers that have insidious mysteries behind them.
Transcripts
Back to Top
Well, let's take a look at this sherry atrial. What a fucking gorgeous color It is red with purple highlights. It is a beautiful like ruby color, and it's deep, you know, it's a deep looking beer. There was just about a finger's worth of had, I guess when I first ported, it's dissipated pretty much to nothing in my glass, and mine's pretty hazy. You guys got more of a clear poor than I did. Yeah, anesthesia got first, ese. Oh, my God, Smell that. I've had this beer once before and I really didn't know what to expect the first time that I had it, I didn't know what the sherry barrels were going to do to it. But there's that same jammy raspberry that you get out of the standard atrial ruby site. But then there's this wonderful rich sherry. It's different than oxidation, you know, like it's sort of like an artificial oxidation, if you will, because the sherry is already oxidized. Yeah, they put it's providing that flavor, but it's not something that's just naturally occurring because of beers. Not old, it's not. You know, it didn't have ah leaked cap or anything like that So it's neat, the texture to the aroma that that provides. Yeah, and there's a nice little CD funkiness to it, which is really good that Sherry throws me off because I don't know if you didn't know Sherry Barrel aged and you open this, you probably e. That's a smell bad at all. It's not off putting it anyway. It just throws me off it first for sure. The thing about the sherry notes that I'm getting here is that it's so much richer and deeper than oxidation would normally allow for. And there would normally be some other things that would come across if the beer was going to be oxidized in this sort of way. I'm sure by the time that regular atrial ruby side is maybe oxidized to this degree, you wouldn't be getting the jammy notes. You wouldn't be getting that seediness beginning like a lot of a lot more of that paper re bullshit. Yeah, I want to say it's a cleaner, Yes, but it's phenomenal. It's It's just sort of a neat thing that I don't know. I haven't really seen too many sherry barrel aged anything up until Jester King started doing it. And I know that they did some with, like this in front era. And the new batch of Are you 55 is partially sherry barrel. Oh, no shit. That, uh, I'm taking really, really deep inhales. And I get old barrels dust not done, but just this kind of a damp aged would touch of acetone to I just had a sip of this. It's delicious. It's not as jammy as regular atrial Ruby site is in my memory. It's been a while since I've had a bottle of that, but this is more of Ah Tremblay tart, refreshing thing. It still has a lot of body. Not really body, but concentration of flavor. Just a good way to put it. Do you think it's thinned out a little from regular atrial? I don't know. I need to have them side by side. I seem to remember it. I think that regular atrial ruby site maybe has a little bit more of ah fuller body than this. Yeah, but I love the fact that this still has that rich, jammy CD raspberry in the front, and then it gives way to this sherry. But you know, Cherry added Ah, weird note here and that I didn't really expect because it's not something that normally appears with oxidation. It really trying to drive it out. It's not as sticky as I remember. Standard atrial ruby site being this is more of just like a straight shot to the back of the throat drinking experience. And I love the way it finishes. Almost like a cabernet. Okay, which is kind of interesting to me. Okay, that's something I didn't ever notice in regular atrial ruby site. I totally get that here, though. Yeah, it does kind of come across a little leathery or something along those lines. Leathery, maybe a hint of chocolate and some, like tobacco. Jammy. Yeah, Tobacco. Yeah. I'm getting a little wine now. I mean, it was probably because you said that, but this is just so fucking awesome. I love this so much. It's really, really great. You know, I really didn't know what to expect when they first released it. And it was one of those beers that once I had it, it was like, Oh, fuck, no, This really
Up Next
Popular Playlists
Best Yoga Podcasts for Experienced Yogis & for Beginners (Audio) Sour Shoe's Greatest Moments on Howard Stern Listen to: Top 15 Funniest Barack Obama Quotes 9 Game Design Podcasts Every Game Designer Needs to Hear 7 Podcast Episodes About The Golden State Killer That Will Keep You Up at Night David Ray Parker & Shocking Audio of the Toy Box Killer You Need to Hear 8 UFO & Aliens Podcasts That Will Abduct Your Mind Audio Cheat Sheet To The Sexy Liberal Podcast Network Controversial Joe Rogan Experience Episodes Audio Wack Packer Beetlejuice Best Moments on The Howard Stern Show 12 Best Episodes of the NoSleep Podcast to Keep You Up at Night
Popular Categories
ASMR Business & Tech Cannabis Fashion & Beauty Gaming History Home & Garden Kids & Family Spirituality Travel
Add to playlist
New playlist