Snippet of The Rush Hour with Dobo Catch Up

Start Time: 00:37 End Time: 02:52
No one dreamed that the Tampa Bay Buccaneers would be in Superbowl LV with the Kansas City Chiefs, but as destiny would have it, they made it.
Category: Sports & Adventure Football
Upload Date: Feb 01, 2021
Snipped By:
Share
station description I love working with creative people to help them produce their best work. Listen to... read more

Casey Pickard
Jump to Full Description Transcript
Playlists that Snippet of The Rush Hour with Dobo Catch Up appears on.
Share 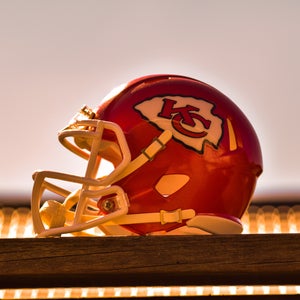 Everything You Need To Know About Superbowl LV
01:27:38 2/2/21 9 audios
Up Next
Full Description
Back to Top
No one dreamed that the Tampa Bay Buccaneers would be in Superbowl LV with the Kansas City Chiefs, but as destiny would have it, they made it. The Buccaneers had the worst professional sports team in America until Tom Brady left the New England Patriots to join them. Now, it's his time to potentially solidify his place as the greatest quarterback of all time.
Transcripts
Back to Top
other than special. Now for those who are getting to know Elliot across Queensland, he is a NFL tragic, like myself, but he supports the Tampa Bay Buccaneers now. Tampa Bay. I don't want to give them the same tag is what the Cleveland Browns have been in the past, and we have been putrid. But they'd be fair to say that they've had some lean years. Elliott wouldn't it Over the last 10 years, It's bean slim pickings in Tampa Bay. Where's professional sports team record in America? It kind of got what Iwas uh, The big news is that at the end of last year, the superstar Tom Brady, um, leaves the New England Patriots and he pretty much as his choice of where he wants to go. But I think the weather has had to have played a factor, and Florida is a beautiful part of the world. He decides that Tampa Bay's where he's gonna land and he decides to join the Tampa Bay Buccaneers at 42 years of age. He decides to join that I don't think anybody in their dream would have realized that we will be talking today as we speak that in a little under 10 days time. Your Tampa Bay Buccaneers are in the Super Bowl, taking on the Kansas City Chiefs, who have the greatest quarterback at this moment in the game, and Patrick Mahomes, who I lost you Super Bowl champions. Who might I just say, if there wasn't illegal contact of the helmet? Wouldn't be at the Super Bowl because they wouldn't even be at the game the Cleveland Browns with. But that's a whole debate. That's the whole nother debate. But can we just talk about seriously from a perspective of Brady? I mean, you immerse yourself obviously with Brady because you're a Tampa Bay man. But for the for the purest, this is one of the great sporting stories it is. And the best thing about Brady story is that you know, he was, what, 1/6 round pick when he got into the NFL draft. Wise, he was mixing snaps when he played at the University of Michigan, so he wasn't even there starter in college. And I wouldn't even say he's the most talented quarterback I've ever seen. He doesn't have the best I've ever seen. He certainly is not the most elusive, but he knows how to win more than anyone I've ever watched in professional sport ever.
Up Next
Popular Playlists
Best Yoga Podcasts for Experienced Yogis & for Beginners (Audio) Sour Shoe's Greatest Moments on Howard Stern Listen to: Top 15 Funniest Barack Obama Quotes 9 Game Design Podcasts Every Game Designer Needs to Hear 7 Podcast Episodes About The Golden State Killer That Will Keep You Up at Night David Parker Ray & Shocking Audio of the Toy Box Killer You Need to Hear 8 UFO & Aliens Podcasts That Will Abduct Your Mind Audio Cheat Sheet To The Sexy Liberal Podcast Network Controversial Joe Rogan Experience Episodes Audio Wack Packer Beetlejuice Best Moments on The Howard Stern Show 12 Best Episodes of the NoSleep Podcast to Keep You Up at Night
Popular Categories
ASMR Business & Tech Cannabis Fashion & Beauty Gaming History Home & Garden Kids & Family Spirituality Travel
Add to playlist
New playlist