Your changes have been saved
All Audio Super Mega Crash Bros. Turbo 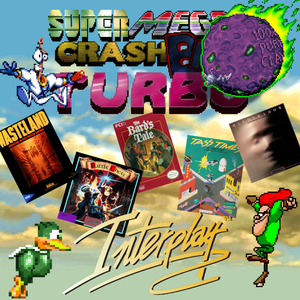 Reflecting on the Headliner

Share
station description Welcome to the Palace of Mega Pixels!

There are currently no playlists containing this audio.
Add this audio track to one of your playlists
Add to Playlist
Up Next
Full Description
Back to Top
Stephen reflects on coming up with headliners before diving into the intro.
Transcripts
Back to Top
I'll move on Thio, our headliner this week I was debating, I'm God. I don't want to say I'm lazy. It's just the thing. The it's the air, you know? It's just like I'm trying to find what would be interesting. I'm trying to figure out what you people want to hear, what would drag you in and, you know, researching some of these stories about certain companies and stuff like that. Uh, certain people, mind you, I feel like it's fascinating, not just for me, but maybe for you. And I like doing this So a song as I can keep my mojo going, I might stick with this format a little bit unless something comes up like a game review or a movie review, because the hell we could talk about. We could do a movie review from Mortal Kombat when it comes out. Yeah, right. We'll have to have, like, a little view party. Yeah, but this week I wanted to dig in on a company that I actually got excited about at one point in my life on day just disappeared from my life like that dog did. Uh, first of all. Yeah. First of all, I wanna shout out to Jimmy Maher from the digital and antiquarian. That's a mouthful, Let me tell you that. So, yeah. Super mega Crash Brothers Turbo guys. Yes, that's too much. That's too much. I'm sure. Your lovely Please don't be mad. Uh huh. Uh, this is this guy. He does such a great work. He's got some deep, deep dives and research and a lot of stuff. And, uh, I happened across as I was trying to do my research. He had a little bit of information here that I couldn't find anywhere else. So it helped me with my research I want I want to talk about. So I was helped. I was grateful that he kind of filled in a few gaps. So big shout out to him for helping me with this, but, uh, several times on this show, I have gushed about games from my childhood mega man being the top one. Even cap come themselves, I would say, Takes a top spot for come for a game company that I was familiar with. I knew their name and I was like their game. I loved their games. They did Ah, lot of Disney games like duck tales. Uh, Chippendales Rescue Rangers. They did another one that I love that I talked about way back when, uh, retro view Little Nemo Adventures in Dreamland. This was this game. I remember reading about it in a magazine and just the idea The concept was like, I gotta play this because it was just so different from everything that I had seen. I was like, I get thio. I wanna play this so bad because it was just It just captured my imagination and eso. Capcom was one of those. But ironically, another company that caught my eye at some point, I didn't even know they were around long before I knew who they were. Okay? And that was the the interesting part about it. But why did it take so long for me to take note? Because Capcom was there and they were doing stuff. But then this other company was like, No, we're still making games. Well, because this game publisher like more of the most interesting ones in the way I see it, they actually started developing on breaking ground on early PCs.
Up Next
Popular Playlists
Best Yoga Podcasts for Experienced Yogis & for Beginners (Audio) Sour Shoe's Greatest Moments on Howard Stern Listen to: Top 15 Funniest Barack Obama Quotes 9 Game Design Podcasts Every Game Designer Needs to Hear 7 Podcast Episodes About The Golden State Killer That Will Keep You Up at Night David Parker Ray & Shocking Audio of the Toy Box Killer You Need to Hear 8 UFO & Aliens Podcasts That Will Abduct Your Mind Audio Cheat Sheet To The Sexy Liberal Podcast Network Controversial Joe Rogan Experience Episodes Audio Wack Packer Beetlejuice Best Moments on The Howard Stern Show 12 Best Episodes of the NoSleep Podcast to Keep You Up at Night
Popular Categories
ASMR Business & Tech Cannabis Fashion & Beauty Gaming History Home & Garden Kids & Family Spirituality Travel
Add to playlist
New playlist