Your changes have been saved
All Audio Rebel Force Radio: Star Wars Podcast

Why Is Rey's Story So Sloppy?

Aimee Alexander Audio Station
Jump to Full Description Transcript
Playlists that Why Is Rey's Story So Sloppy? appears on.
Share 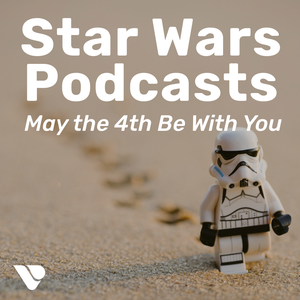 Star Wars Podcasts: May the 4th Be With You
01:51:54 4/22/21 11 audios
Up Next
Full Description
Back to Top
Rebel Force Radio features amazing celebrity guests, news, opinions, and reviews of all things Star Wars. Take a deep dive into George Lucas' franchise both on-screen and off-screen with RFR: A Star Wars Podcast.
Transcripts
Back to Top
that would be what the who from where beyond awkward. I mean beyond awkward. I I mean it's just it's unfathomable. Another another issue um according to again to this Reddit poster that they had and of course there's no surprises with the character of Ray. A lot of disagreement. A lot of back and forth. Um You know, confirmation here according to this poster that Ray was considered to be the granddaughter of OBI one. Um That was something that was was uh made it into various treatments. And then also um Abrams wanted Ray to be the granddaughter of Anakin, eventually pushing for her to be luke's daughter with a fellow that he had with a fellow rebel uh after the war. Um And then the back story to how Ray was left on Jacko. So all right, so we have a couple of things here. Um this issue of Ray being either the granddaughter of Obi one or the granddaughter of Anakin. Um There seemed to be hints of that. I think the problem that I have with the eventual reveal of Ray is that they really play with you in that first film. I mean they really play with you to make you think it could be a skywalker. It could be, they make you there's moments when you're watching that film, if you haven't seen the other two that you think that she could be a solo, that she could be Han and Leia's long lost daughter. So the ideas are so, so varied and where they end up is is arguably in in my opinion, kind of less satisfying. But it does sound like according to this poster that everything from Obi wan's granddaughter to luke's daughter was was considered and eventually they just settled on uh no one no one because essentially the Sequels were an attempt by lucasfilm to do a soft reboot on Star Wars altogether. You see that they're trying to recreate everything and they're trying to Build a new thing without building a new thing because George Lucas painted them in a corner by developing episode seven as a vehicle for Han Luke and Leia along with new emerging characters and the actors were spoken to the the fan base was made aware of this. So then you know once they let George go and they were left with a Star Wars film that had already been announced. Which is again the most unfortunate thing about franchise film making the reality of it today where all they need is the I. P. And they announced a release date for the film because that's all become so competitive. All these movie studios want to claim the certain weekends you know christmas and memorial Day and fourth of july weekend. All these important weekends they need to get claimed. And so guys like bob Iger Announced the next three star wars films with release dates before there's cast hired a director hired a script written before there's anything, all they have is the name Star Wars. And so that immediately puts the creatives under the gun. We're now entering into the age of assembly line filmmaking where all you need is an I. P. And then you have the green light and I don't know if that's the right way to make films but that's the harsh reality of franchise school making. I wouldn't worry about that jimmy as long as it as long as the craves there, it's all about getting the right right and the right director and the right cast. It's like they can make great stuff under the gun. They can if you get one thing wrong, if you get a bad writer you've got a bad movie. Yeah. Yeah so it's franchise making starts to build itself and all these different I. P. S. Are gonna be around forever now. Hopefully we'll see some stability in the ranks and and and have a real pipeline of talent to take control of these projects. Qualified talent. We need the right voices at the table. I think marvel is there. I think Lucas film is woefully behind in this department. Maybe the baby sitting there now. Maybe we're past the growing pains. Favreau gives us hope. Mm Talking talking about people at the table. I just think about back to the table read, you know for the force awakens and the way the castle's all laid out and you had daisy Ridley sitting between Harrison and carry and you know, the immediate goes
Up Next
Popular Playlists
Best Yoga Podcasts for Experienced Yogis & for Beginners (Audio) Sour Shoe's Greatest Moments on Howard Stern Listen to: Top 15 Funniest Barack Obama Quotes 9 Game Design Podcasts Every Game Designer Needs to Hear 7 Podcast Episodes About The Golden State Killer That Will Keep You Up at Night David Parker Ray & Shocking Audio of the Toy Box Killer You Need to Hear 8 UFO & Aliens Podcasts That Will Abduct Your Mind Audio Cheat Sheet To The Sexy Liberal Podcast Network Controversial Joe Rogan Experience Episodes Audio Wack Packer Beetlejuice Best Moments on The Howard Stern Show 12 Best Episodes of the NoSleep Podcast to Keep You Up at Night
Popular Categories
ASMR Business & Tech Cannabis Fashion & Beauty Gaming History Home & Garden Kids & Family Spirituality Travel
Add to playlist
New playlist