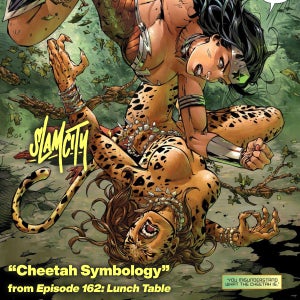 While Burrito Bandito delivers an in-depth review of Wonder Woman 1984, Gemini and Arthur ask jokingly about the symbology behind the cheetah.
Category: Comedy Comedy Show
Upload Date: May 04, 2021
Author: Slam City
Jump to Full Description
Snippets are a new way to share audio!
You can clip a small part of any file to share, add to playlist, and transcribe automatically. Just click the to create your snippet!
Snippets: Clips of Slam City - Episode 162 Clip: Cheetah Symbology (Clean Version) that people like
Add to Playlist
Share

There are currently no playlists containing this audio.
Add this audio track to one of your playlists
Add to Playlist
Up Next
Full Description
Back to Top
While Burrito Bandito delivers an in-depth review of Wonder Woman 1984, Gemini and Arthur ask jokingly about the symbology behind the cheetah.
Snippet Transcripts

Slam City - Episode 162 Snippet: Cheetah Symbology
00:00-02:17
so and that's why she becomes like a cheetah, Do you think she doesn't like that amongst themselves? Yeah. You're trying to make it sound like pieces. Is the cheetah? The peace of the animal kingdom. Is that what she does symbolize? Yeah. What's the symbolism here symbolism? That's the symbology. She just, What's a symbolic a smart man? What's the symbolic smart man. What is he trying to tell me about your doctor? Hey doc Hey doc doc a smart doctor, smart man. Doctor smart man. Was the symbology was the symbology here. All right. That's pretty funny man. Yeah, they could have avoided that trap a little bit. I think they leaned into a little bit too hard. They went with the, there's a lot of different back stories for how cheetah becomes cheetah. There's a lot of different people who have been cheetah in the comics. They went with Barbara Minerva to, and the storyline that was kind of more recently where she is a friend. Yeah, you got to sell those books, right? Um where she's a friend of Diana before she goes cheetah right? And so it's an interesting dynamic there where you know one woman is, you know this is my friend and I don't want her to become this thing and it's about jealousy, like the character of cheetah is like I wanna be like you and I want to have this power, right? Was king louis because they're like besties in the, in the jungle book. I want to look like you were supposed to one like me, but the best is after like one dinner date. They like, they were wondering they've only known each other for like a couple of days that does seem like a short amount of time to forge this really strong relationship with someone. Maybe this is I think that was a misstep as well, I think they could have no friends. Maybe they do. I don't know. That's superhuman. Damn. That's why she's like, damn, I want to like Diana. That was a dream. Like that was your wish. That was really showing up like a cheetah.
Up Next
Popular Playlists
Best Yoga Podcasts for Experienced Yogis & for Beginners (Audio) Sour Shoe's Greatest Moments on Howard Stern Listen to: Top 15 Funniest Barack Obama Quotes 9 Game Design Podcasts Every Game Designer Needs to Hear 7 Podcast Episodes About The Golden State Killer That Will Keep You Up at Night David Ray Parker & Shocking Audio of the Toy Box Killer You Need to Hear 8 UFO & Aliens Podcasts That Will Abduct Your Mind Audio Cheat Sheet To The Sexy Liberal Podcast Network Controversial Joe Rogan Experience Episodes Audio Wack Packer Beetlejuice Best Moments on The Howard Stern Show 12 Best Episodes of the NoSleep Podcast to Keep You Up at Night
Popular Categories
ASMR Business & Tech Cannabis Fashion & Beauty Gaming History Home & Garden Kids & Family Spirituality Travel
Add to playlist
New playlist