Showing That You Deserve The Part | Cody Musick

From Audio: [Feature Friday] Cody Musick on the Importance of a Comprehensive Marketing Strategy Over the Status Quo - The ROI Online Podcast Ep. 14

Start Time: 17:11 End Time: 20:30
Cody talks about what he went through when they tried to get a part for marketing and branding, against national firms.

The ROI Online Podcast
Jump to Full Description Transcript
Playlists that Showing That You Deserve The Part | Cody Musick appears on.
Share 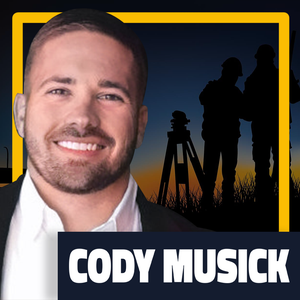 The Importance of a Comprehensive Marketing Strategy Over the Status Quo - Cody Musick
56:18 5/12/21 5 audios
Up Next
Full Description
Back to Top
Cody talks about what he went through when they tried to get a part for marketing and branding, against national firms.

Transcripts
Back to Top
think about that conversation that you had with the partners. Now here's make fun of texas a little bit. Here is the company and rule texas, right? That's been successful. That's got a bunch of texas boys that have been running this business. They're good business people, they know their stuff and they've been successful without and then necessary nod to marketing or an expectation of marketing or any of that, why in the world. And then on top of engineering and surveying, why do you even need to consider marketing at that time? That's really fascinating to me because most most people go well you don't need to have marketing for surveying company are right, what is wrong with you? Cody that you would walk in and risk the stock value. Have as a valued team member and bring up a crazy topic of marketing when in their heads are thinking, oh, you want to hire someone to do our social media, I'm not even on facebook, right? So one of the things that happen that kind of solidified our need to grow up for lack of better words to mature as a company, in our our marketing and branding Was, we were competing at that about 2017 2018. I mean, we were competing with some national firms for projects. I mean, we were we were going after some big projects, you know, we were the David and Goliath industry at that point, you know, the there were some really big firms that we were competing against and we were competing quite well. But one of our customers, kind of friend, a friend on the side told one of our partners, he said, look, here's the bill. You're going after this project and you want to get in and you want to run with the big boys. But the problem is when we sit around our board of directors and you know, we we sit down as an energy company and we're talking about these big strategic projects and the contractors and vendors that might be good to partner with because at that point you become a stakeholder in the project. So when they look at stake holders in their projects, we were competing with people that have done their homework and they had done the legwork for branding and imaging and content and speak. And when they show up on the job site, they had a nice well branded truck and their shirts all look the same. And so the perception was exactly what we had become. We were like, I don't know, the rebels really, you know, like we were the misfits a little bit, but we were good and we were effective and disruptive, but we didn't look the part right. And so when those energy companies and looking at their projects and they say, well we've got company A, B and C. National level firms well branded, well marketed, they all had business development guys that, you know, they were all, they were in their face constantly. We just could not compete from an image and perspective. We were just outclassed honestly in that area. Now, never mind the fact that we actually did better work than they did and we actually gave our customers a better customer experience because, you know, we were personal nimble agile for all intent purposes, but we didn't look the part and we were missing out on opportunities because of that.
Up Next
Popular Playlists
International Yoga Day: Listen & Learn New Poses Sour Shoe's Greatest Moments on Howard Stern Listen to: Top 15 Funniest Barack Obama Quotes 9 Game Design Podcasts Every Game Designer Needs to Hear 7 Podcast Episodes About The Golden State Killer That Will Keep You Up at Night David Parker Ray & Shocking Audio of the Toy Box Killer You Need to Hear 8 UFO & Aliens Podcasts That Will Abduct Your Mind Audio Cheat Sheet To The Sexy Liberal Podcast Network Controversial Joe Rogan Experience Episodes Audio Wack Packer Beetlejuice Best Moments on The Howard Stern Show 12 Best Episodes of the NoSleep Podcast to Keep You Up at Night
Popular Categories
ASMR Business & Tech Cannabis Fashion & Beauty Gaming History Home & Garden Kids & Family Spirituality Travel
Add to playlist
New playlist