What Are The Stages of A Marketing Funnel? | Jack Born

Start Time: 26:13 End Time: 29:41
Jack provides the stages of a marketing funnel, and talks about some mistakes that business owners make when starting their marketing funnel.

The ROI Online Podcast
Jump to Full Description Transcript
Playlists that What Are The Stages of A Marketing Funnel? | Jack Born appears on.
Share 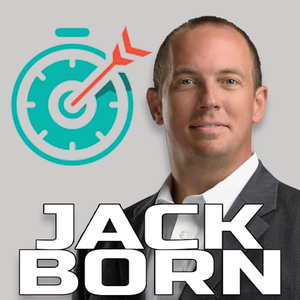 The Future of Sales Automation & Conversions - Jack Born
58:47 5/15/21 5 audios
Up Next
Full Description
Back to Top
Jack provides the stages of a marketing funnel, and talks about some mistakes that business owners make when starting their marketing funnel.

Transcripts
Back to Top
Yeah. All right. So what are the stages of the marketing funnel? So, I I don't have a pithy answer of there's eight stages and here they are. But I would say that the, you know, the stages extend further than most people think a lot of people, when when you say, you know, what is your marketing funnel? A lot of them would think about where um someone who, someone who isn't known to them isn't on their on their client list or on their prospect list. First encounters their opt in form or their web page. So, well, it starts with this often page, then they watch these three videos and then they go on this email sequence and then hopefully they buy um in my mind, there's there are stages before that. So that would include what is the initial message that gets their attention? So it could be a facebook at, it could be a Youtube video, it could be this podcast, it could be your book, you know, that is part of your funnel. So for example, um taking a looking at yours, I don't know every stage your funnel, but what I do know is that the golden toilet book that you've written is part of your funnel. It doesn't start when they read the book and then they click the, you know, follow the link and then go to your page. It's not that they have arrived at their final, they're already in your funnel, that's part of your messaging. And if there is a facebook ad before that, that gets them curious about this book, that's where the fun starts. It's where that the stages begin, where you are first reaching out to out to the client when they first hear about you. And by the way, if you're, if, if getting referrals from happy existing clients, um is something that's active in your business as it is for us, that's part of your funnel. You know, you don't have control over what someone is actually saying, you can influence it. But what someone is saying to that stranger, really, that's, that's the start of your funnel. It's not when that stranger comes to your website, it's when that message happens. And just to prove that point, if you're there are lots of things that you can put into a facebook ad or Youtube ad, for example, um, that will get someone to your often page and maybe even get them to fill out the, you know, to get on your list. But as you and I both know, there is a huge, depending on what you are putting out there as that first action, that first problems that first say freebie or you know, the first delivery is really going to impact whether they are a good buyer or not. Um, you know, who is going to attract and really what their mindset is because it's a continuation of that conversation that started way back when they heard the referral from a friend or they saw the ad or they saw the video. And so, you know, just doing what you can, to build your list for the sake of building your list may turn out to bring in people who are not going to be really good matches for your overall business. You know, so if you think about the funnel, just in terms of, you know what I need to optimize for, uh, increasing conversion rates on the opt in form, let's say you could, you know, but you're not really tracking it all the way through and you're not realizing that the whole entire funnel from the beginning message, all the way to the very end is your funnel. You could get hyper focused on growing your list, but you grew your list with people who really are going to be good buyers and good clients for the long run, I think.
Up Next
Popular Playlists
Best Yoga Podcasts for Experienced Yogis & for Beginners (Audio) Sour Shoe's Greatest Moments on Howard Stern Listen to: Top 15 Funniest Barack Obama Quotes 9 Game Design Podcasts Every Game Designer Needs to Hear 7 Podcast Episodes About The Golden State Killer That Will Keep You Up at Night David Parker Ray & Shocking Audio of the Toy Box Killer You Need to Hear 8 UFO & Aliens Podcasts That Will Abduct Your Mind Audio Cheat Sheet To The Sexy Liberal Podcast Network Controversial Joe Rogan Experience Episodes Audio Wack Packer Beetlejuice Best Moments on The Howard Stern Show 12 Best Episodes of the NoSleep Podcast to Keep You Up at Night
Popular Categories
ASMR Business & Tech Cannabis Fashion & Beauty Gaming History Home & Garden Kids & Family Spirituality Travel
Add to playlist
New playlist