Approaching The Hiring Process In A Different Way | Charlie Hoehn

From Audio: Charlie Hoehn On How To Get Hired & Cure Your Anxiety — The ROI Online Podcast Ep. 6

Start Time: 19:13 End Time: 23:41
Charlie talks about his strategy on how he got hired by big companies, and how he approached the hiring process. He also provides some tips on what to do to get hired. 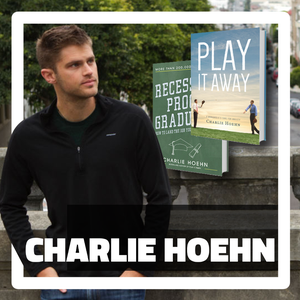 How To Get Hired & Cure Your Anxiety - Charlie Hoehn
01:27:24 5/17/21 6 audios
Up Next
Full Description
Back to Top
Charlie talks about his strategy on how he got hired by big companies, and how he approached the hiring process. He also provides some tips on what to do to get hired.

Transcripts
Back to Top
I read a blog the other day about that you had posted that talks about that really lands on this area. Talk to us about at some point and you started seeing yourself as this, this person that could be very valuable to Seth Godin or raw meat or tim or whoever that where did that change happen? And when did you give yourself permission? You had to give yourself permission to do that even though other people saw you as valuable, but you still had to go, okay, I'm gonna own it. Talk to us about that. Yeah. So this is really about like probably getting over imposter syndrome and having the confidence to approach somebody with with something like this. And even beyond if you're a business owner, like how do you have the confidence in your own value that you're providing to the world? And I think the big thing for me is I and I still don't it's not about me. Mhm. It's really the people that I approach. Yes, I have a goal in mind. Yes. I have my own selfish needs and I know selfish is a loaded word for some people, but like, let's call it what it is. I have what I want from the scenario. But everything I communicate around is about their problems and their how they are in pain in some way, shape or form. So I think this applies to you, not just business owners, but graduates to, which is you have to almost think of yourself and treat yourself like you're the doctor, like you are the one who is coming to them with a diagnosis and you're putting your heads together and saying, how can we resolve this together? So it was less like I knew I was competent with my skill sets, but it wasn't, I never came to people and said, Hey, I'm a video editor. I've been editing video for years. I'm really good at it. It was none of that. No, no, The structure, the skeleton of the conversation matters a lot and that is, I'm a huge fan of you and your work has impacted me in this specific way. So I'm not just blown smoke. Like I would send to re meet like for instance, I was able to create a budget. Here's a snapshot of my budget because of you or whatever. Let's stop. Let's stop right there. Just what I'm interrupting. When you say you were a fan of, from raw meat, you were connecting with him at some level of why he does what he does and it must have been concurrent with why you believe what you believe or why you feel you're why I mean your, why you want to help people. It was coming from a similar area. Would you disagree? It was sincere, like saying I liked him as a person and we all on, on a deep level want to be liked and approved of for the work that we do no matter how successful you get. But beyond that, the reason I love working with entrepreneurs is because they take responsibility for other people's problems. And I've always identified with that where it's like, look, we can't all solve every problem, we all need help. And so to approach people who I knew were already having a big impact on other people and say, hey, if I just dial you in a little bit in this one area, you will affect thousands of people in a more positive way, right? Like these aren't little things, they have ripple effects across society. And so I always wanted to be an entrepreneur myself and at that age I was like, I just need to find the smartest entrepreneurs I can find that are operating in this digital era that we're in. Seth. Godin was the only one who was talking about permission marketing back then, for instance, and everybody else's talking about direct mail and stuff. And so I wanted to learn from them and help them do their jobs better. That was really, really it does.
Up Next
Popular Playlists
Best Yoga Podcasts: Listen & Learn New Poses Sour Shoe's Greatest Moments on Howard Stern Listen to: Top 15 Funniest Barack Obama Quotes 9 Game Design Podcasts Every Game Designer Needs to Hear 7 Podcast Episodes About The Golden State Killer That Will Keep You Up at Night David Parker Ray & Shocking Audio of the Toy Box Killer You Need to Hear 8 UFO & Aliens Podcasts That Will Abduct Your Mind Audio Cheat Sheet To The Sexy Liberal Podcast Network Controversial Joe Rogan Experience Episodes Audio Wack Packer Beetlejuice Best Moments on The Howard Stern Show 12 Best Episodes of the NoSleep Podcast to Keep You Up at Night
Popular Categories
ASMR Business & Tech Cannabis Fashion & Beauty Gaming History Home & Garden Kids & Family Spirituality Travel
Add to playlist
New playlist