Your changes have been saved
All Audio Digital Mindfulness

Tanya Schevitz is the spokesperson for Reboot's National Day of Unplugging, which takes place on March 6th through 7th. The holiday encourages people to disconnect from digital devices to reconnect with everything around us.
Category: Business & Tech
Upload Date: Feb 22, 2021
Snipped By:
Share 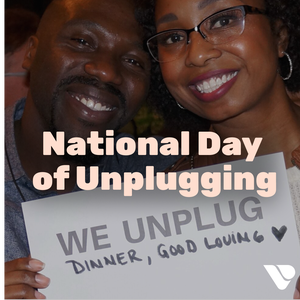 National Day of Unplugging - An Audio Guide to Help You Unplug
01:32:05 2/20/21 11 audios
Up Next
Full Description
Back to Top
Tanya Schevitz is the spokesperson for Reboot's National Day of Unplugging, which takes place on March 6th through 7th. The holiday encourages people to disconnect from digital devices to reconnect with everything around us.
Transcripts
Back to Top
absolutely on. And I think having a discussion with the people around you is so powerful, You know, if people, um, you know, talk thio, the their kids or they talk to their friends about this, I think it would be It's great. You know, I was speaking with these teens and they said, um, that they sit around and like, you know, all their friends have their phones out. And so this is like one girl said, I don't I don't always want to my phone But everyone has their phones out. So I feel like it's like a domino effect. You have to. What are you gonna do? You're sitting there by yourself. So it's like if she brings it up with them like, Hey, let's try, you know, toe be at the cafe today without our cell phones. Or do the cellphone staff where everyone puts their cell phone in the middle on the first person to touch it has to pay, I said. With teens, maybe they should do like they can't pay. So maybe have them do something embarrassing, like have to do a little dance in the middle of a cafe or something like that if they touch the phone But just, like, engage in a conversation with the people around you about the digital use because I think that helps everyone recognized the impact on themselves and around on the people around them. When you say that you've spoken to a lot of teenagers about this, um, is that something that I mean? Do you have your reboot hat on S O that you know, like, do they kind of like Phil lead into the question or do it? Is that something that's really that you find that's coming up with them, that actually they do feel the need to want Thio disconnect and Thio or rather, reconnect with other people on with nature and with their parents etcetera? Um, well, mostly it's been I had had my legal hat on like, I'm at an event, but there are. I mean, I certainly engage people in this conversation everywhere I am, you know, Like I said, I'm slightly annoying, but try not to be preachy, you know, I just try to like I just try to engage people in the conversation, But so with the teens, mostly it's conversation. But I usually start out the conversation saying, Have any of you ever been ignored by someone on a phone? And they all raised their hands and they say, Have any of you ever ignored someone? Um, while you were on your phone and they all raised their hands. And so then it starts the conversation, and I usually ask about their parents to their parents, put limits on their technology to their parents, limit their own. And that's when all that stuff comes out. So I mean it really it Z But I just have to ask those few questions, and then they are. They want to talk about it. I mean, you know, I had an hour long conversation with two sessions of teenagers two weeks ago, and it was just so powerful and just wonderful to hear them thinking about and talking about it and, you know, hopefully making a change. Well, well, thank you so much. I mean, is there anything else that you'd like to talk about or share with our audience today? Um, I think that's it. Just encourage people to really, you know, embrace it and try the national Try it on the national day of unplugging and you go to our website national david plugging dot com to check it out and get more information. Brilliant. And when it's the national Dave unplugging again, March 6th and seventh that starts at sundown on March 6. Brilliant or tenure? Tennis habits? Thank you so much. Thank you. This has been wonderful.
Up Next
Popular Playlists
Best Yoga Podcasts for Experienced Yogis & for Beginners (Audio) Sour Shoe's Greatest Moments on Howard Stern Listen to: Top 15 Funniest Barack Obama Quotes 9 Game Design Podcasts Every Game Designer Needs to Hear 7 Podcast Episodes About The Golden State Killer That Will Keep You Up at Night David Ray Parker & Shocking Audio of the Toy Box Killer You Need to Hear 8 UFO & Aliens Podcasts That Will Abduct Your Mind Audio Cheat Sheet To The Sexy Liberal Podcast Network Controversial Joe Rogan Experience Episodes Audio Wack Packer Beetlejuice Best Moments on The Howard Stern Show
Popular Categories
ASMR Business & Tech Cannabis Fashion & Beauty Gaming History Home & Garden Kids & Family Spirituality Travel
Add to playlist
New playlist