Your changes have been saved
All Audio Jump Start Weekly

Start Time: 01:16 End Time: 04:32
There’s emotion running through the chapter starting with Tomura’s mom asking if he could Kill. Midoriya isn’t sure but he knows he’s going to save the little kid.
Category: Gaming Video Games
Upload Date: Mar 25, 2021
Snipped By:
Share 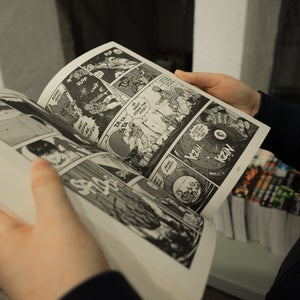 10 of the Best Podcasts About Manga
02:25:53 3/29/21 11 audios
Up Next
Full Description
Back to Top
There’s emotion running through the chapter starting with Tomura’s mom asking if he could Kill. Midoriya isn’t sure but he knows he’s going to save the little kid. The drawing of Stain is fantastic. The manga Stain looks much better than the Anime version of him.
Transcripts
Back to Top
all right. Shall we just get right into it, then? Starting with my hero. Academia number 305 Used to keep men Doria and Tom Rasheeda. Rocky, what did you think of this chapter? Kevin, I really liked the kind of just the emotional thing running through this whole chapter of Tamara's grandma. Mom? Yes, Mom. Being like now, this isn't a request. But do you think you can actually kill him when you're up to it? And just the really the thing that really got me Was Madura being like, Well, like, I kind of saw through all the hate that there was a little kid crying So I don't know if I can or not, but I will definitely tell you I'm going to save that little kid. What really got me was the bit where he's like, Yeah, I faced lots of people before and had no choice but to fight. And it's the montage of various villains, but he's like, I don't know, maybe if we could talk, though it wouldn't have had to be that way. And it's gentle and la Brava is really good. That's the Heard that really got me was also really good. Also, just something like that drawing of staying his fire on its own. Marcus, I forget how much better mangosteen looks. An enemy stain. His enemy stain doesn't look bad, but mangosteen is something else. He's straight off the original Teenage Mutant Ninja Turtles comic. Yeah, I think it's just the medium, absolutely like he doesn't look as in color. He doesn't look as scary. Yeah, and I think it's just because he's like I don't want to say featureless, but there's not really much for the manga or the anime to enhance versus in the Manga. He just he just he fits it so well. There's a reason I made that Teenage Mutant Ninja Turtles comparison because it's very similar with them in the original black and white comics. They all look like badass ninjas, and I'm sure everyone's seen them in the cartoons. Not to say they can also look good there, But yeah, it depends on the cartoon because, like the early cartoons, they looked silly and then they kind of changed up their style to fit the cartoons better, and they came out looking at a lot cooler. But yeah, I really enjoyed this chapter. I love the black whip guy, referring to Tamara as all for one's a meat suit like, I really wonder what the original was for that because it's the sort of thing a fan would say derisively. So, yes, that really got me. And like you said, the emotional core of it's really, really good. Mhm. So, yeah, I super enjoy this chapter. Is there anything else you want to say on it? I kind of like how throughout the whole thing when Madura is kind of like No, you know, And he's going through that speech of, like, I saw the little kid in there that I want to save. And maybe if I had been able to understand these villains a bit more, we wouldn't have had to fight that, like the shadows start sloughing off of him. Yeah, like in his inner realm, like he starts like realizing more of himself or something like that. Like it was a really cool image of him being able to, like, talk and see more of himself in this inner world. And I'm also really looking forward to the to reincarnations that are like turned around with their face to the wall like there in time. Out it is with black, which is a cliffhanger. I will say that it's like, All right, you two have to help too. I refer to them as sir.
Up Next
Popular Playlists
Best Yoga Podcasts for Experienced Yogis & for Beginners (Audio) Sour Shoe's Greatest Moments on Howard Stern Listen to: Top 15 Funniest Barack Obama Quotes 9 Game Design Podcasts Every Game Designer Needs to Hear 7 Podcast Episodes About The Golden State Killer That Will Keep You Up at Night David Parker Ray & Shocking Audio of the Toy Box Killer You Need to Hear 8 UFO & Aliens Podcasts That Will Abduct Your Mind Audio Cheat Sheet To The Sexy Liberal Podcast Network Controversial Joe Rogan Experience Episodes Audio Wack Packer Beetlejuice Best Moments on The Howard Stern Show 12 Best Episodes of the NoSleep Podcast to Keep You Up at Night
Popular Categories
ASMR Business & Tech Cannabis Fashion & Beauty Gaming History Home & Garden Kids & Family Spirituality Travel
Add to playlist
New playlist