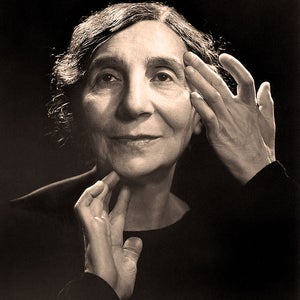 A Conversation With Wanda Landowska – 1953 – Past Daily Weekend Gallimaufry - click on the snippet for a sample.

From Audio: A Conversation With Wanda Landowska – 1953 – Past Daily Weekend Gallimaufry

A rare 1953 interview this weekend with one of the pivotal figures in the rediscovery and cultural rescue mission of music from the time of Bach and before.

Wanda Landowska, who lived from 1879 to 1959, embraced the musical literature of the Harpsichord at a time when almost no one else was. Lik
Category: Music
Upload Date: Apr 11, 2021
Snipped By:
Share

Past Daily: Amazing Historical Concerts & News
Jump to Full Description Transcript
Playlists that A Conversation With Wanda Landowska – 1953 – Past Daily Weekend Gallimaufry - click on the snippet for a sample. appears on.
Share

Past Daily: World of Music
07:04:49 11/3/20 21 audios
Up Next
Full Description
Back to Top
A rare 1953 interview this weekend with one of the pivotal figures in the rediscovery and cultural rescue mission of music from the time of Bach and before.

Wanda Landowska, who lived from 1879 to 1959, embraced the musical literature of the Harpsichord at a time when almost no one else was. Like most music from that period, the music of Bach was largely forgotten by the turn of the 19th Century. And the harpsichord was considered an ancient relic of that forgotten period. Landowska was part of a handful of musicians who started looking at that period and realizing a lot had been abandoned for no good reason. The music of J.S. Bach, due largely to the efforts of Landowska, Gustav Mahler and several others, started to breathe new life and become slowly re-introduced to the Concert Stage. Thanks to the invention of the phonograph, many of these composers’ works were rediscovered and recorded for posterity, and Wanda Landowska was one of the first to record the music of Bach as well as Scarlatti and many others from the period. She became not only one of the prime advocates of music for the Harpsichord, she also became one of its most noted.

In 1953 a series of interviews was done for the short-lived television series Wisdom. Since Landowska had recently settled in the New England area, and since she was in the process of doing the landmark series of recordings of Bach and Scarlatti for RCA-Victor, she was one of the first interviews for the series. And even though she is at times hard to understand (a very thick accent and not really good recording equipment), this is one of the rare interviews she gave.

For those of you who have heard about Wanda Landowska, heard her recordings (they’ve been reissued almost constantly since they were first offered), or are a fan of the Baroque period but may never have heard her voice – here’s your chance to listen to what she has to say, and to get her point of view and her approach to an instrument she loved and rescued from the brink of oblivion.
Transcripts
Back to Top
how nice of you to come to leg. It's a great pleasure for me, madam to be here. What was that you were playing? I have played the third movement of the concerto in D. Major. It is surprising to find you your harpsichord and back here in New England. It is wonderful you find in this Connecticut hillside. Yes. That you have the peace and the security that yes. And I like to make a walk walks. I walked through the roads I go and I see this marvelous landscape and I'm inspired. I come back, I come back to my harpsichord and then I go again to see the mountains and the lack and leg. And so so just to absolutely true, do you like living in the United States? Of course, I wouldn't believe I wouldn't like it. I love I love it's very strange. You have a sensitiveness to the music and to human beings. A very beautiful sensitivity. How do you say sensitiveness, possibility? How do you say it, sensitivity, Madame, lindo Oscar. Do you think americans care enough about art? I've gotten music too. And musicians, they are flourishing sometimes to see how funny they are, how big they are, happy they are. Now, may I introduce perhaps or everybody does not? Perhaps, perhaps he got, May I introduce to you, my very dear friend and companion and my baby. My everything. Whatever I love in my life, it is my heart. This is my heart. Secret. Look at it and listen please. It's a magnificent instrument. It is a beautiful instrument. It has a very long and dramatic story, but this will be explained another time. Not today. Not today. What gives it that wonderful sound? You know, it is it is understandable that I had to fight for this instrument because it is so different from the piano, it is so different. The piano is strict, the string is strict here the string is plucked. Uh anything you see how sensitive it is. I cannot even get my my elbow immediately responsive. Now be quiet peace and listen to europe. Mr. Please we have here too. Keep up. We have seven bidders. We have one string at a turkey bone, this one thing and three others things at a lower keeper. And they are, as I say, marvelous organized because we don't need to use them at once or sleep. You see, mm Sometimes we take one, Sometimes we take another one and sometimes we take the third one. And if you are in very high spirit, you take them all together. Then this is some others. May I explain you how it works? Perhaps you would like it. You see, this is this is the small jock which plucks the string and this is a small piece of wood. And here is found the tongue
Up Next
Popular Playlists
Best Yoga Podcasts for Experienced Yogis & for Beginners (Audio) Sour Shoe's Greatest Moments on Howard Stern Listen to: Top 15 Funniest Barack Obama Quotes 9 Game Design Podcasts Every Game Designer Needs to Hear 7 Podcast Episodes About The Golden State Killer That Will Keep You Up at Night David Ray Parker & Shocking Audio of the Toy Box Killer You Need to Hear 8 UFO & Aliens Podcasts That Will Abduct Your Mind Audio Cheat Sheet To The Sexy Liberal Podcast Network Controversial Joe Rogan Experience Episodes Audio Wack Packer Beetlejuice Best Moments on The Howard Stern Show 12 Best Episodes of the NoSleep Podcast to Keep You Up at Night
Popular Categories
ASMR Business & Tech Cannabis Fashion & Beauty Gaming History Home & Garden Kids & Family Spirituality Travel
Add to playlist
New playlist