In this weekly episode* of the Mindstate Marketing Hour, host Steve Brown of ROI Online, interviews Will Leach, author of Marketing to Mindstates, founder of Triggerpoint, and CEO of the Mindstate Group on why focusing on customers emotions and mindstates is key to successful marketing.*Originally p
Category: Business & Tech
Upload Date: Oct 26, 2020
Jump to Full Description
Snippets are a new way to share audio!
You can clip a small part of any file to share, add to playlist, and transcribe automatically. Just click the to create your snippet!
Snippets: Clips of [Special Episode] The Mindstate Marketing Hour #5 with Will Leach - The ROI Online Podcast Ep. 47 that people like
Add to Playlist
Share

02:17
What Are Mindstates? | Will Leach
Business & Tech
Add to Playlist
Share

07:47
Applying Triggers In Your Business | Will Leach
Business & Tech
Add to Playlist
Share

03:08
What Are Triggers? | Will Leach
Business & Tech
Add to Playlist
Share 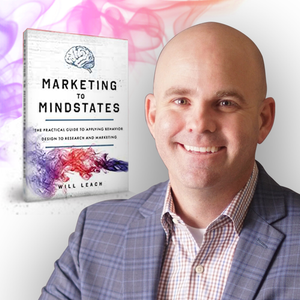 The Mindstate Marketing Hour with Will Leach
14:02:06 2/1/21 21 audios
Up Next
Full Description
Back to Top
In this weekly episode* of the Mindstate Marketing Hour, host Steve Brown of ROI Online, interviews Will Leach, author of Marketing to Mindstates, founder of Triggerpoint, and CEO of the Mindstate Group on why focusing on customers emotions and mindstates is key to successful marketing.*Originally produced as a livestream video Mindstate Group free resources: https://www.mindstategroup.com/resourcesInterested in getting more Marketing to Mindstates content?Read Will's book: Marketing to MindstatesCheck out their website: https://www.mindstategroup.com/Follow Will on LinkedIn, Twitter, FacebookNeed real resources that will help you grow your business? Grab your FREE business growth stack resources here!https://thegoldentoilet.com/resourcesEnroll in the QuickStart Academy today to learn how to develop and implement a proven growth strategy that grows your ROI, your business, and your confidence. Learn more HERE.Thinking of starting your own podcast? Buzzsprout’s secure and reliable posting allows you to publish podcasts online. Buzzsprout also includes full iTunes support, HTML5 players, show statistics, and WordPress plugins. Get started using this link to receive a $20 Amazon gift card and to help support our show!Support the show (https://cash.app/$stevemfbrown)
Snippet Transcripts

What Are Mindstates? | Will Leach
06:26-08:43
So by understanding the state of mind that someone is in, when they start to evaluate the product, then you can start to dial in your messaging to really connect with the higher order go. So and we're stepping into the triggers here, but just give us a little backstory there on the state of mind or the mind states. Yeah. So mind states are these temporary moments of emotional arousal and we have them all the time. So just imagine that throughout your day, you may go through 10 2030 moments where everything just feels like you're in Zen almost like things are natural, things feel intuitive and you're not confused. You feel safe in these moments, psychologically these are called mind states. And in these mind states you're more open to messaging, you're more open to offers that feel natural. And when things feel natural, Like I said, those things we tend to gravitate towards because they feel safe, they feel intuitive, they feel natural. So it's important to identify these mind states, which I talk about in the book and why that's important. We're gonna talk about those triggers today, is that when you are in this state of zen, when I just call it like Runner's high steve, remember, I don't know if you've ever done it, but I've gone into a runner's high where I was running and all of a sudden, like I just lost time and I had this like moment of clarity. Well, you have these moments of clarity 2030 40 times a day. You just don't know it because you're not consciously aware of them. But these things when you're in that moment, there's a trigger and these triggers what we want to talk about today, because these triggers take you from the moment of clarity to making a decision. We have moments of clarity all the time. We feel great all the time. You know, we may not be constantly aware of it, but we don't buy. We just move on. The whole point of. The last part of this book is about activating a trigger in those moments. And when you do that, then somebody takes it from emotionally excited and aroused. And yes, this feels great to I'm gonna go buy something and if your product delivers, if you've got a great product, great service, great food, whatever it is you're selling and you deliver in that state of mind, people are going to be more loyal to you. They're going to remember you, there's all these great benefits because you delivered on that emotional desire that they had.

What Are Triggers? | Will Leach
10:53-14:01
All right, so let's talk about the triggers. What's um first kind of describe what is a trigger and then how do we start to define the triggers and then apply them, yep. So the first one is if you are in uh kind of the social scientists feel when I say trigger you would refer to that as a cognitive heuristic. Or maybe there's somebody who has a PhD out there or nine men PhD just basic psychology class and there's these things called cognitive heuristics and what that really means is that we have shortcuts to decision making. And so let me give you a number. So I saw a study that one time measured the number of decisions that you typically make on a given day. And this study said that typically we make about 35,000 decisions. Like 35,000 decisions. Now I don't know how they did that, I'm sure that they may be kind of like when I place one ft forward, that's a decision. A second foot forward this third. So let's not think about 35,000. Let me just take 20% of those decisions. And they say, let's let's say that you really are making only 7000 decisions on any given day. It's only 20 of what the numbers would tell you. Even with that. Could you imagine doing cost benefit analyses of every one of those 7000 decisions? There's no way you you wouldn't get out of bed if you had to think through all the decisions on why should I get out of bed? What are the costs and benefits of getting out of bed or taking a shower in the morning? So here's what happens rather than you doing cost benefit analyses and thinking through you have these things called triggers these rules of thumb. They are things that you've learned over time that you're not even aware of, but they make decisions easier and faster. So the easiest one I give you, the one I talked about in the in the United States a lot is one of these rules of thumb are these triggers is called scarcity effect. And it's something that we've all learned, at least in our culture, that we tend to value things that we believe are scarce in nature scarcely effect. So when you see something on amazon and it says um only five left, what amazon is doing is they're dropping in a trigger that's telling your subconscious mind kind of that reptilian brain of you're saying this is scarce in nature, therefore it has more value to me. So I should I should take a look at that. That's much easier to make a decision on its scared. So I better go take it go by this thing than it is to really think through the cost benefits and steve when you put three of these heuristics are these triggers into a piece of creative. And I've got like a website here. I just actually pulled up amazon just to show or talk about. You know, I I see just on the first, you know, kind of slide your first page like seven of these triggers and if you just get a few of them into your creative, whether that's a website or whether that's an email, you can get moving somebody from something. Like I really like this idea to pulling the trigger to clicking on, you know, learn more to buying a book, etcetera. So that's kind of what what these triggers do they move you from excitement and arousal to an action.

The Higher Order Goal | Will Leach
03:36-05:09
So let's talk about the higher order goal would be understanding. Not just that, not just I want to buy a house or I wanna do that. I have a higher order goal talks about give us a little quick background on a higher order goal that is more than just wanting to buy a house. Yeah. So when you ask people, what are they looking for, what do they want? They will tell you things called functional goals. I want to save money. I want to save time. I want to eat great food. Um but the higher order goals where the emotion comes into play and higher order goals are where we generally direct our behavior. So higher order goal is asking somebody why is saving money saving time? Why is eating something that tastes great important to you? And it's a technique called laddering. And when you ladder somebody to the higher order goal, it's the meaningful part of why something is important to them. And we tend to go after those things that are at the higher order of our goals. So that's why it's so important to understand those things. Because if you are able to tap into somebody's higher order goals to deliver on somebody's higher order goals, you can expand your consideration set away from just selling a home or selling, you know, a great tasting chip. You can you can expand your consideration set into things that are their consideration set into things they weren't even thinking about you for. So you're not just great tasting chip, you're a chip that brings fun to the party. Well, now, all of a sudden you're considered a part of a party versus just a chip.
Up Next
Popular Playlists
Best Yoga Podcasts for Experienced Yogis & for Beginners (Audio) Sour Shoe's Greatest Moments on Howard Stern Listen to: Top 15 Funniest Barack Obama Quotes 9 Game Design Podcasts Every Game Designer Needs to Hear 7 Podcast Episodes About The Golden State Killer That Will Keep You Up at Night David Parker Ray & Shocking Audio of the Toy Box Killer You Need to Hear 8 UFO & Aliens Podcasts That Will Abduct Your Mind Audio Cheat Sheet To The Sexy Liberal Podcast Network Controversial Joe Rogan Experience Episodes Audio Wack Packer Beetlejuice Best Moments on The Howard Stern Show 12 Best Episodes of the NoSleep Podcast to Keep You Up at Night
Popular Categories
ASMR Business & Tech Cannabis Fashion & Beauty Gaming History Home & Garden Kids & Family Spirituality Travel
Add to playlist
New playlist