From Audio: 30 Minutes That Shaped A Generation – The Selling Of Youth Culture – Radio Commercials In The 60s – Past Daily Pop Chronicles 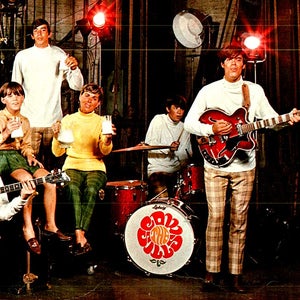 03:00
Play Audio
Add to Playlist
Share Report
Something interesting happened around the time of the British Invasion in the early 1960s’; teenagers in America were suddenly discovered to be a massive consumer market. Not that there hasn’t always been a goodly chunk of the population hovering under 30 – it’s just this particular generation, the
Category: Society & Culture
Publish Date: Jul 10, 2021
Snipped By:
Share
station description Past Daily: News, History, Music And An Enormous Sound Archive.

Past Daily: Amazing Historical Concerts & News
Tagged in this Audio:
More
Jump to Full Description Transcript
Found on these Playlists

There are currently no playlists containing this audio.
Add this audio track to one of your playlists
Add to Playlist
Full Description
Back to Top
Something interesting happened around the time of the British Invasion in the early 1960s’; teenagers in America were suddenly discovered to be a massive consumer market. Not that there hasn’t always been a goodly chunk of the population hovering under 30 – it’s just this particular generation, the one that’s come to be known as Baby Boomers, represented an enormous flood of people in that age group. More so than any other generation before it, the Baby Boom Generation was seen as the one group of people who spent the most money, went the most places and bought the most clothes. Not so much the big ticket items (although cars were integral in American life in the 1960s, buying new ones was still in the domain of the relatively few), but lots of small-ticket items which came to be the fodder for an entire genre of Advertising. And because top-40 radio had achieved virtual supremacy of the airwaves during this time, Youth-oriented Advertising was the key ingredient in furthering the goal of a consumer-oriented society. Even if sometimes the products weren’t all that Youth-Oriented (i.e. Beer and Wine and cigarettes), the nudge-nudge/wink-wink that kids smoked and drank was abundantly apparent. For the next 30 minutes, when you hit the play button above, you’ll get a small sampling of what America’s Youth were being hit with, almost non-stop during those heady years of 1964-1969. Of course, youth-oriented Advertising didn’t stop there – it’s carried on as an almost predominant form of selling to this day. And, for the sake of not inducing an overdose, it’s just a 30 minute sampling – it could be for hours. But like anything – a little goes a long way and you may not make it past the 5-minute mark – I don’t blame you. But it got started somewhere – and as clumsy and naive as it sometimes was, it managed to climb right into the collective American psyche and persuade us to part freely with our hard-earned/hard-panhandled/hard-promised dimes and dollars. We’ve never looked back and we never spent more.
Transcripts
Back to Top
a car, any color car and give it a diamond like finish to last at least a year polish your car with Wesley's concentrate off Wesley. Wesley says more than an hour to polish its to die. I can't say that kind of film that keeps the ultraviolet rays of the sun from turning away the finish of your car. Cool it cool it with the easiest car polish of all our with diamond valpolicella oxen. It's why it's Tough, strictly a man. 45 year plans experience, unique every day of the week. Either a bottles of 10s, 45, 45, a completely unique experience. 45. Once you could only buy Colt 45 here or there, then people discovered millions of them discovered its flavor, its smoothness, its unparalleled liveliness. Until finally they discovered Colt 45 into being America's number one malt liquor, a completely unique experience. Don't draw it by Monica, Kirby's will sell you a personality for 899-1299. What's your thing? Are what? Somebody once told Kirby's, You can't please all the people, all of the time. Forget it, because we stop shoes for guys who know who Cardin is and shoes for souls It. And shoes for sitting around the frat robes and loafers and boots. Look for 8 99 to 12 99. Why not come in and discover who you really are? What are what's your thing? Kirby's is a family thing. Okay. Hello? Think Footwear. Think
Up Next
Add to playlist
New playlist