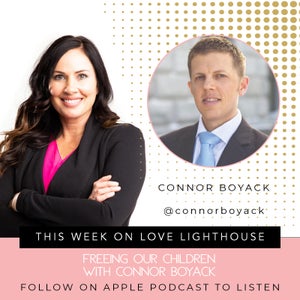 36: "Freeing Our Children" with Connor Boyack

Share
station description Love Lighthouse is about waking up and living the life you were meant to live! Do y... read more It was March 11th of 2020 and it was my birthday. When I woke up that morning things felt fairly normal. Little did I know that by the end of that day only 12 hours later we would turn a corner and the world would never be the same. By 9 p.m. it had been announced that all school was canceled, peopl
Category: Religion
Publish Date: Sep 13, 2021
Jump to Full Description
Snippets are a new way to share audio!
You can clip a small part of any file to share, add to playlist, and transcribe automatically. Just click the to create your snippet!
Snippets: Clips of 36: "Freeing Our Children" with Connor Boyack that people like

There are currently no playlists containing this audio.
Add this audio track to one of your playlists
Add to Playlist
Up Next
Full Description
Back to Top
It was March 11th of 2020 and it was my birthday. When I woke up that morning things felt fairly normal. Little did I know that by the end of that day only 12 hours later we would turn a corner and the world would never be the same. By 9 p.m. it had been announced that all school was canceled, people were to stay home and even the NBA season was canceled.


We (myself and many other parents) were now in charge of taking the reins and teaching our children at home. I am forever grateful for this moment because it was a major turning point for our family. I had been too busy with life to ask those really important questions about the school I would drop my children off at for a whopping 35 hours a week. What were they learning? Who wrote the curriculum? What are the influences they are bathing in all day?


In this episode, I sit down with Connor Boyack. This man is a warrior. I am so grateful for courageous people like him that are willing to go against the grain of society and speak truth. He has written several books to teach, empower and free people through knowledge that many people are not aware of. Knowledge is power. We as parents must start looking deeper into first how we’ve been deceived in our world and seek the truth. Then we can guide our children in truth.


Connor Boyack founded Libertas Institute in 2011 and serves as its president. Named one of Utah’s most politically influential people by The Salt Lake Tribune, Connor’s leadership has led to dozens of legislative victories spanning a wide range of areas such as privacy, government transparency, property rights, drug policy, education, personal freedom, and more. A public speaker and author of over two dozen books, he is best known for The Tuttle Twins books, a children’s series introducing young readers to economic, political, and civic principles. A California native and Brigham Young University graduate, Connor lives in Lehi, Utah, with his wife and two children.


Check out Connor’s powerful work at ...