Startin' off the New Year/New Decade on bended-knee: Become a Patron!


Dexter Gordon Quartet this weekend, with Al Haig on piano, Pierre Michelot on bass and
Category: Music Jazz
Upload Date: Jan 05, 2020
Jump to Full Description
Snippets: Clips of This Audio That People Like 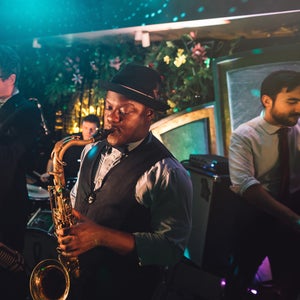 Startin' off the New Year/New Decade on bended-knee: Become a Patron!


Dexter Gordon Quartet this weekend, with Al Haig on piano, Pierre Michelot on bass and Kenny Clarke on drums. All recorded and broadcast by Radio France on September 25, 1977 and rebroadcast in 2017 as part of France Musique's Legends Of Jazz series. If you haven't already, or if you haven't bookmarked it yet, head over to France Musique and check out some of the amazing Jazz they are running over there, daily. No need to thank me for it - but come back here from time to time, because I know you're going to get lost in the treasure-trove of great Jazz they offer. And you don't need to be fluent in French to enjoy it. Music and Jazz are universal languages - spoken everywhere.

On to the Man himself. Dexter Gordon found Europe in the 1960s a much easier place to live, saying that he experienced less racism and greater respect for jazz musicians. He also stated that on his visits to the US in the late 1960s and early 1970s, he found the political and social strife disturbing. While in Copenhagen, Gordon and Drew's trio appeared onscreen in Ole Ege's theatrically released hardcore pornographic film Pornografi (1971), for which they composed and performed the score.

He switched from Blue Note to Prestige Records (1965–73) but stayed very much in the hard-bop idiom, making classic bop albums like The Tower of Power! and More Power! (1969) with James Moody, Barry Harris, Buster Williams, and Albert "Tootie" Heath; The Panther! (1970) with Tommy Flanagan, Larry Ridley, and Alan Dawson; The Jumpin' Blues (1970) with Wynton Kelly, Sam Jones, and Roy Brooks; The Chase! (1970) with Gene Ammons, Jodie Christian, John Young, Cleveland Eaton, Rufus Reid, Wilbur Campbell, Steve McCall, and Vi Redd; and Tangerine (1972) with Thad Jones, Freddie Hubbard, and Hank Jones. Some of the Prestige albums were recorded during visits back to North America while he was still living in Europe; others were made in Europe, including live sets from the Montreux Jazz Festival.

In addition to the recordings Gordon did under his major label contracts, live recordings by European labels and live video from his European period are available. The Danish label SteepleChase released live dates from his mid-1960s tenure at the Montmartre Jazzhus. The video was released under the Jazz Icons series.

Less well known than the Blue Note albums, but of similar quality, are the albums he recorded during the 1970s for SteepleChase (Something Different, Bouncin' With Dex, Biting the Apple, The Apartment, Stable Mable, The Shadow of Your Smile and others). They again feature American sidemen, but also such Europeans as Spanish pianist Tete Montoliu and Niels-Henning Ørsted Pedersen.

Now that you're filled in on the history and where to hang-out, hit the play button and enjoy this very nice set from 1977.
Up Next
About
Vurbl finds and organizes the world of audio. Want your own audio station? Coming soon.
Contact
Become an audio curator or just help us find the best of audio. Want your own channel? Get on the waitlist by contacting us.
Follow Us
Copyright 2021 Vurbl Media, Inc., All Right Reserved | Privacy Policy
Add to playlist
New playlist