Audio: The Princess and the Pea

There once was a prince who wanted to marry a true princess but could not find one suitable to be his wife. One night an unexpected guest arrives at the castle to seek shelter from the rain. It is a young woman claiming to be a real princess, but the prince must put her to the test. Listen now.
Category: Audiobooks & Stories
Upload Date: Jul 29, 2009
Author: Hans Christian Andersen
Jump to Full Description Transcript
Snippets are a new way to share audio!
You can clip a small part of any file to share, add to playlist, and transcribe automatically. Just click the to create your snippet!
Snippets: Clips of Audio: The Princess and the Pea that people like 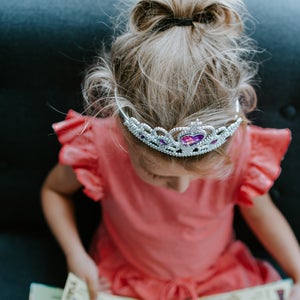 Best Free Streaming Audio of Princess Audiobooks for Children
01:08:25 6/16/20 7 audios
Up Next
Full Description
Back to Top
There once was a prince who wanted to marry a true princess but could not find one suitable to be his wife. He always finds something wrong with them because they do not prove to be real princesses. One night an unexpected guest arrives at the castle to seek shelter from the rain. It is a young woman claiming to be a real princess, but the prince must make sure she is telling the truth and put her to the test.
Transcripts
Back to Top
The Princess and the Pea by Hans Christian Andersen. This liberal box recording is in the public domain. Once upon a time, there was a prince who wanted to marry a princess. But she would have to be a real princess. He traveled all over the world to find one, but no. Where could he get what he wanted? There were princesses enough, but it was difficult to find out whether they were real ones. There was always something about them that was not as it should be. So I came home again and was sad for he would have liked very much to have a real princess. One evening a terrible storm came on. There was thunder and lightning, and the rain poured down in torrents. Suddenly a knocking was heard at the city gate and the old king went toe open it. It was a princess standing out there in the front of the gate. But good gracious. What a sight The rain and the wind had made her look, the water around down from her hair and clothes. It ran down into the toes of her shoes and out again at the heels. And yet, she said, that she was a real princess. Well, we'll soon find that out. Thought the old Queen. But she said nothing went into the bedroom, took all the bedding off the bedstead and laid up he on the bottom. Then she took 20 mattresses and laid them on the P and then 20 eider down beds on the top of the mattresses. On this a princess have delight. All night in the morning, she was asked how she had slept. Oh, very badly, said she. I have scarcely closed my eyes all night. Haven't only knows what was in the bed, but I was lying on something hard so that I am black and blue all over my body. It's horrible now. They knew that she was a really princess because she had felt the P right through the 20 matches is and the 20 eider down buds. Nobody but a really princess could be as sensitive as that. So the prince took her for his wife. For now, he knew that he had a real princess and the pea was put into the museum where it may still be seen if no one has stolen it there. That is a true story. End of the Princess and the Pea by Hans Christian Andersen
Up Next
Popular Playlists
Best Yoga Podcasts for Experienced Yogis & for Beginners (Audio) Sour Shoe's Greatest Moments on Howard Stern Listen to: Top 15 Funniest Barack Obama Quotes 9 Game Design Podcasts Every Game Designer Needs to Hear 7 Podcast Episodes About The Golden State Killer That Will Keep You Up at Night David Ray Parker & Shocking Audio of the Toy Box Killer You Need to Hear 8 UFO & Aliens Podcasts That Will Abduct Your Mind Audio Cheat Sheet To The Sexy Liberal Podcast Network Controversial Joe Rogan Experience Episodes Audio Wack Packer Beetlejuice Best Moments on The Howard Stern Show
Popular Categories
ASMR Business & Tech Cannabis Fashion & Beauty Gaming History Home & Garden Kids & Family Spirituality Travel
Add to playlist
New playlist