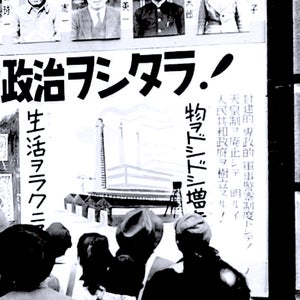 From Audio: April 10, 1946 – Japan Goes To The Polls In First Post-War Election. Past Daily Reference Room

Past Daily: News Junkies
05:49:19 11/2/20 82 audios
Up Next
Full Description
Back to Top
April 10, 1946 – In what was the first election in Post-War Japan, also had the biggest turnout. With almost 73% of the eligible voters casting ballots, the Liberal Party, headed by Ichiro Hatoyama took 148 of the 464 seats in Parliament.

Prime Minister Kijūrō Shidehara, who had been appointed by the Emperor in October 1945, dissolved the House of Representatives in December 1945. Shidehara had been working with Allied occupation commander Douglas MacArthur to implement a new constitution and other political reforms.

The political parties reorganized before the election took place, but the purge of many politicians on the basis of the “Removal and Exclusion of Undesirable Personnel from Public Office” directive issued by GHQ on 4 January 1946, dealt a heavy blow to every existing political party except the Japan Communist Party. This was especially the case of the Japan Progressive Party, which was primarily made up of former Yokusan (Imperial Assistance) legislators. In the end, the party that won the most seats in the first postwar election was the Japan Liberal Party, led by HATOYAMA Ichiro. Japan also saw the emergence of its first female legislators, with thirty nine women elected to the Diet.

The abovementioned directive, however, prevented HATOYAMA, the Party’s leader becoming Prime Minister. YOSHIDA Shigeru who succeeded his as Party head, then formed a coalition cabinet with the Japan Progressive Party. The president of Toyo Keizai Shinposha (The Oriental Economist), ISHIBASHI Tanzan, had also run for office under the Liberal Party banner, but was unsuccessful. YOSHIDA, nonetheless, appointed as Finance Minister.

This was the first time Japanese women were allowed to vote. 39 women were elected to office, the largest number elected until the 2005 elections. On the other hand, Taiwanese and Koreans in Japan had their rights to vote and to run for office suspended.

Following the election, there was a brief attempt to keep the Shidehara cabinet alive by having Shidehara join the Progressive Party, which the other major parties opposed. The Liberals and Progressives agreed to form a government under Liberal leader Ichiro Hatoyama on 2 May, but Hatoyama was promptly purged on 4 May and a new government formed under Foreign Minister Shigeru Yoshida, who officially became Prime Minister on 22 May.

Here is an overseas report, given by Mutual Broadcasting’s Don Bell on the day of the election – April 10, 1946.

Transcripts
Back to Top
This is Don Bell reporting from Tokyo. The votes in Japan's biggest freest and most important election are not yet counted. But it is already safe to anticipate that the next prime minister of Japan is very likely to be Liberal leader. Hatoyama. True enough, he wrote a book in which he praised Hitler Mussolini and their methods. He wrote The Chiang kai shek could never unite china and.
Up Next
Popular Playlists
Best Yoga Podcasts: Listen & Learn New Poses Sour Shoe's Greatest Moments on The Howard Stern Show Listen to: Top 15 Funniest Barack Obama Quotes 9 Game Design Podcasts Every Game Designer Needs to Hear 7 Podcast Episodes About The Golden State Killer That Will Keep You Up at Night David Parker Ray & Shocking Audio of the Toy Box Killer You Need to Hear Best UFO Podcasts That Will Abduct Your Mind Controversial Joe Rogan Experience Episodes Audio Wack Packer Beetlejuice Best Moments on The Howard Stern Show 12 Best Episodes of the NoSleep Podcast to Keep You Up at Night Sexy ASMR Audio to Turn You On
Popular Categories
ASMR Business & Tech Cannabis Fashion & Beauty Gaming History Home & Garden Kids & Family Spirituality Travel
Add to playlist
New playlist