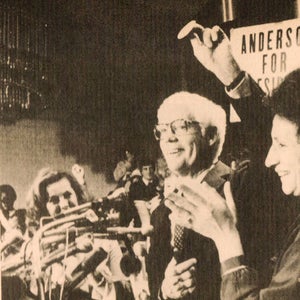 Start Time: 00:06 End Time: 00:40
Since April 2, 1980 was right in the middle of Presidential Primary season, most of the news for this day had to do with the recently completed Wisconsin and Kansas Primaries and the telling results.

Past Daily: News Junkies
05:49:19 11/2/20 82 audios
Up Next
Full Description
Back to Top
Since April 2, 1980 was right in the middle of Presidential Primary season, most of the news for this day had to do with the recently completed Wisconsin and Kansas Primaries and the telling results.

Carter won handily, putting Ted Kennedy in a distant 2nd place. California Governor Jerry Brown finished way in the back, and was frustrated to the point of quitting the campaign. On the Republican side, Ronald Reagan was looking to be the clear front-runner, while John Anderson was putting on a brave face and vowing to continue, even though his name was not on the ballot in the next two Primaries. Grave doubts were cast as to whether Anderson could financially continue his campaign – and most felt he wasn’t.

But while the Campaign season was in full swing, other news was climbing through the window. The hostage situation in Tehran was continuing with Iranian government spokesmen tossing a few loosely strung carrots in the air with demand for another statement of intent as a pre-condition for negotiations. Nobody at The White House knew what it was the Iranians were holding out for, but Carter did announce he was delaying imposing any new sanctions, based on what he termed and “encouraging episode”.

On Capitol Hill, the Senate Budget Committee voted 10-8 to boost the President’s Pentagon Spending Bill by $6 billion, even though spending cuts were announced in the Postal Service budget and a certain bet Saturday mail deliveries would likely be a thing of the past soon.

And Baseball was looking doubtful this year as contract negotiations broke down, forcing cancellation of the remainder of Exhibition Season. There was optimism the regular season would start on time, providing talks could continue to a settlement by May 22 -opening day.

All this, and reports of activity around Mt. St. Helens in Washington State was just how April 2nd rolled in 1980, via NBC Radio’s News On The Hour.

Transcripts
Back to Top
Carter. Landslides in Wisconsin and Kansas have buried Jerry Brown and presented Senator Edward Kennedy with a tremendous uphill struggle to win the Democratic nomination. The president was running about 25 percentage points ahead of Kennedy and returns from the two primary state. Brown was overwhelmed to the point where he pulled out of the race altogether. Ronald Reagan. Kansas was a runaway, while the Wisconsin contest was almost close in that ST George Bush finished second and John Anderson third. NBC correspondent Mike Moss has more in this report.
Up Next
Popular Playlists
Best Yoga Podcasts: Listen & Learn New Poses Sour Shoe's Greatest Moments on The Howard Stern Show Listen to: Top 15 Funniest Barack Obama Quotes 9 Game Design Podcasts Every Game Designer Needs to Hear 7 Podcast Episodes About The Golden State Killer That Will Keep You Up at Night David Parker Ray & Shocking Audio of the Toy Box Killer You Need to Hear Best UFO Podcasts That Will Abduct Your Mind Controversial Joe Rogan Experience Episodes Audio Wack Packer Beetlejuice Best Moments on The Howard Stern Show 12 Best Episodes of the NoSleep Podcast to Keep You Up at Night Sexy ASMR Audio to Turn You On
Popular Categories
ASMR Business & Tech Cannabis Fashion & Beauty Gaming History Home & Garden Kids & Family Spirituality Travel
Add to playlist
New playlist