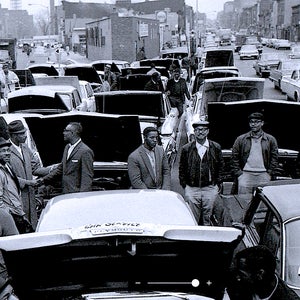 April 20, 1964 -A Threat Of Stall-Ins – Marching For Medicare – Goings On In Manhattan - click on the snippet for a sample.

From Audio: April 20, 1964 -A Threat Of Stall-Ins – Marching For Medicare – Goings On In Manhattan

Start Time: 00:14 End Time: 02:47
April 20, 1964. A busy news day if you were living in New York on this day. Another new phrase was entering our vocabulary for the 60’s: The Stall-In. Leaders for CORE and several other groups were threatening to use this new tactic in the ever-growing call for Civil Rights. City officials were worr
Category: News & Politics
Publish Date: Apr 20, 2021
Snipped By:
Share
station description Past Daily: News, History, Music And An Enormous Sound Archive.

Past Daily: Amazing Historical Concerts & News
Tagged in this Audio:
More
Jump to Full Description Transcript
Playlists that April 20, 1964 -A Threat Of Stall-Ins – Marching For Medicare – Goings On In Manhattan - click on the snippet for a sample. appears on.
Share

Past Daily: News Junkies
05:49:19 11/2/20 82 audios
Up Next
Full Description
Back to Top
April 20, 1964. A busy news day if you were living in New York on this day. Another new phrase was entering our vocabulary for the 60’s: The Stall-In. Leaders for CORE and several other groups were threatening to use this new tactic in the ever-growing call for Civil Rights. City officials were worried, since it meant tying up traffic for what could be hours as cars “broke down” at busy intersections across the city in protest. The New York State Supreme Court struck down the threatened protest which was slated to take place on the morning of the opening of the New York World’s Fair. It was remaining to be seen whether or not the court’s decision would be accepted by the three chapters of CORE in New York. Queens District Attorney Frank O’Connor, who had asked for the injunction, invited the leaders of the groups involved to meet and speak with him at his office. The meeting was not considered a success from the City’s point of view. The Fair was scheduled to open in two days and chaos from the stall-ins was anticipated.

Meanwhile, the subject of Medicare was the basis for a protest march by seniors who descended on the Waldorf-Astoria where President Johnson was busy lunching with Publishers and discussing Foreign Policy. The Seniors were determined to see President Johnson and present him with their plea for passage of the Medicare bill. The seniors held a Poverty Banquet of milk and crackers at the Hotel Commodore some nine blocks away from where Johnson was lunching. When the seniors finally arrived at The Waldorf, they were informed the President had already left. The seniors expressed bitter disappointment but also anger that march organizers failed to mention that LBJ would be gone by the time they arrived, but didn’t tell anyone.

All that, plus actor Sidney Poitier receiving an award at the Mayor’s office. A press conference with Elizabeth Taylor and Richard Burton, a review of opening plays on Broadway and plans to restore a block in lower Manhattan to its appearances in the 17th and 18th centuries were revealed.

News for this April 20th in 1964 as heard over WNBC (AM and FM) in New York.
Transcripts
Back to Top
you talk sports with Bill Mazer Weekday Afternoons at 4:30 on WNBC AM and FM new york. Good evening. This is Roger bowman with a 6 30 new york news special. 15 minutes of top metropolitan area news and I'm joseph Michaels with on the spot reports about the city acts to prevent Stalin's as the fair deadline nears elderly citizens protest for Medicare bill and an interview with Mr and mrs Richard Burton. Right Now, it's 42° in New York and here's tonight's top story with a fair opening Wednesday. City officials acted to prevent a Stalin joseph Michaels has that story. Supreme Court Justice John Conroy said no Today to the three core chapters who have been saying they will stall cars on the roads leading to the world's fair. This coming Wednesday morning, it remains to be seen whether the judges, legal prohibition will be accepted today. Queens District Attorney frank O'Connor, who had asked for the injunction, invited the leaders of the groups involved to meet with him at his office. It is highly questionable whether from the city's point of view, the meeting could be called a success. Mr O'Connor heard the side of the protesters and then warned them that to the city this type of protest would be especially serious and to indicate that the kind of latitude shown demonstrators arrested at the Downstate Medical Center last summer would not be displayed here. I asked him What would actually happen to the highways around there. From your knowledge. Mr. District attorney of 50 or 100 cars were stalled on the approaches to it. Well, I think the potential is really dangerous. I think that real chaos could result and I think that anyone caught in that situation, if some intemperate act was committed by one of the parties involved, that it might lead to real bloodshed and real, real bad situation. That's what we're trying to avoid. In getting this order. The show cause signed today was installing trains at all. We did not learn of anything and they can't accept what we've read frankly in the papers and the late editions of last night and this morning. This was not part of our discussion today. There is no provision in the order referring to activities on trains. The indications were that his arguments did not impress the Bronx Brooklyn and new york core leaders with whom he met Herbert Calendar of the Bronx spoke for the group to newsman after giving mr frank O'Connor, the district Attorney of Queens, the courtesy of attending the meeting this morning. Uh, and uh,
Up Next
Popular Playlists
Best Yoga Podcasts: Listen & Learn New Poses Sour Shoe's Greatest Moments on The Howard Stern Show Listen to: Top 15 Funniest Barack Obama Quotes 9 Game Design Podcasts Every Game Designer Needs to Hear 7 Podcast Episodes About The Golden State Killer That Will Keep You Up at Night David Parker Ray & Shocking Audio of the Toy Box Killer You Need to Hear Best UFO Podcasts That Will Abduct Your Mind Controversial Joe Rogan Experience Episodes Audio Wack Packer Beetlejuice Best Moments on The Howard Stern Show 12 Best Episodes of the NoSleep Podcast to Keep You Up at Night Sexy ASMR Audio to Turn You On
Popular Categories
ASMR Business & Tech Cannabis Fashion & Beauty Gaming History Home & Garden Kids & Family Spirituality Travel
Add to playlist
New playlist