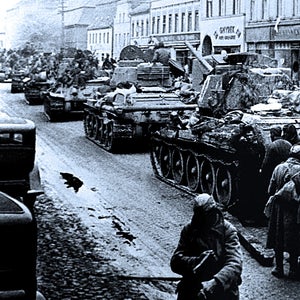 Start Time: 00:00 End Time: 01:27
April 26, 1945 – news of the war and news that Berlin was capitulating fast. 3/4 of the city was now under Russian occupation, while sporadic fighting continued in some streets while cleanup was already starting in others. News from Italy of the German Army in retreat and that Italian Partisans were
Category: History
Publish Date: Apr 26, 2021
Snipped By:
Share
station description Past Daily: News, History, Music And An Enormous Sound Archive.

Past Daily: Amazing Historical Concerts & News
Tagged in this Audio:
More
Jump to Full Description Transcript
Playlists that April 26, 1945 – Berlin 3/4 Gone, Collapse In Italy And A Grocer Named Bartholdy. Click the snippet for a sample. appears on.
Share

Past Daily: Conflict's Greatest Hits
03:56:24 11/2/20 59 audios
Up Next
Full Description
Back to Top
April 26, 1945 – news of the war and news that Berlin was capitulating fast. 3/4 of the city was now under Russian occupation, while sporadic fighting continued in some streets while cleanup was already starting in others. News from Italy of the German Army in retreat and that Italian Partisans were taking their toll on fleeting German troops and had re-captured the towns of Genoa, Milan and Turin. Also, news that Mussolini had been captured while trying to seek refuge at a Monastery in Como, Italy brought a sigh of relief to many.

German propaganda was still working overtime – the latest reports told of a “Hitler Lookalike” who had been brought to Berlin to appear in the final fighting and to die while the “real Hitler” had escaped to conduct the war in another location. The reports went on to name the unlucky imposter as August Wilhelm Bartholdy, former Grocer.

The Americans and British were scoring big gains too. In the north, the 2nd Army captured Bremen. In the South, General Patton‘s 3rd Army crossed the Danube at three points, almost encircling Regensburgh, while Munich was neariing capitulation. The French 1st Army completed the envelopment of the Black Forest by driving up to the Swiss front.

Former Hero of World War 1, the now-disgraced Marshall Petain surrendered to French officers on a charge of High Treason. The Marshall and his party were to be taken on a special train to Paris where he would be placed in custody to await trial. In Paris, it was announced by the Prosecution that Clemency would be asked for Petain on the grounds of humanity and his advanced age.

And that was a little of what was going on, this fast-paced news day of April 26, 1945 as reported by NBC News Of The World.
Transcripts
Back to Top
six p. M. G R U N. Growing precision watch time help prevent wartime accidents. This is W. E. F. New york. Here's Don Hollenbeck with the 6:00 News, a program presented by Peter Paul Makers of Chocolate Coconut Mounds. The news report tonight will make it clear why this is called the Blackest Day for Germany since the war began almost complete collapse in Italy Berlin three quarters gone stepped in and bremen down Burn. Oh and Czechoslovakia in Russian hands and Patton, about 70 miles from Berchtesgaden. A story about Mussolini, I fervently hope is true and a real fantasy about Hitler. Marshal Petain's returned to France and news of a local hero in the pacific a report on the first business session of the san Francisco conference, details of these and other happenings. After a word from Arthur Gary. Are you sometimes too busy at noon time to enjoy a full course lunch? Here's a tip from a man who's busy all day. An important war work. A sandwich and a glass of milk is all the lunch his time for, but he likes to top it off with a bar of peter paul's mounds. Makes a delightful dessert gives him the energy and nourishment. He needs tree ripened coconut delicious. Chocolate mounds are rich in energy rich and nourishment rich in pure eating enjoyment.
Up Next
Popular Playlists
Best Yoga Podcasts: Listen & Learn New Poses Sour Shoe's Greatest Moments on The Howard Stern Show Listen to: Top 15 Funniest Barack Obama Quotes 9 Game Design Podcasts Every Game Designer Needs to Hear 7 Podcast Episodes About The Golden State Killer That Will Keep You Up at Night David Parker Ray & Shocking Audio of the Toy Box Killer You Need to Hear Best UFO Podcasts That Will Abduct Your Mind Controversial Joe Rogan Experience Episodes Audio Wack Packer Beetlejuice Best Moments on The Howard Stern Show 12 Best Episodes of the NoSleep Podcast to Keep You Up at Night Sexy ASMR Audio to Turn You On
Popular Categories
ASMR Business & Tech Cannabis Fashion & Beauty Gaming History Home & Garden Kids & Family Spirituality Travel
Add to playlist
New playlist