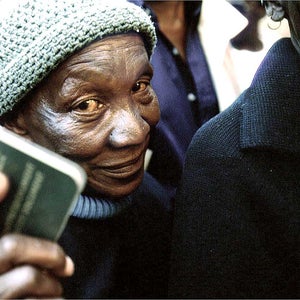 April 27, 1994 – A Mountaintop Day – ALL Of South Africa Heads To The Polls. Click on the snippet for a sample.

Start Time: 00:01 End Time: 00:55
April 27, 1994 – the day all of South Africa went to the polls in the first truly democratic election in the country’s history. Nelson Mandela was expected to win handily, as South Africa’s Black majority voted for the first time and went to the polls in staggering numbers. Spirits were high, despit
Category: History
Publish Date: Apr 27, 2021
Snipped By:
Share
station description Past Daily: News, History, Music And An Enormous Sound Archive.

Past Daily: Amazing Historical Concerts & News
Jump to Full Description Transcript
Playlists that April 27, 1994 – A Mountaintop Day – ALL Of South Africa Heads To The Polls. Click on the snippet for a sample. appears on.
Share

Past Daily: News Junkies
05:49:19 11/2/20 82 audios
Up Next
Full Description
Back to Top
April 27, 1994 – the day all of South Africa went to the polls in the first truly democratic election in the country’s history. Nelson Mandela was expected to win handily, as South Africa’s Black majority voted for the first time and went to the polls in staggering numbers. Spirits were high, despite several attempts to derail the elections, as White Extremist groups staged bombing attacks at a few polling places around Capetown. Nothing would stop this from being, as Bishop Desmond Tutu described as he left the voting booth; “A Mountaintop Day”.

Meanwhile, back in the States – this was the day former President Nixon was to be buried, alongside his wife Pat on the grounds of the Nixon Library in Yorba Linda, California. Mourners included 4 Presidents, as well as President Clinton. The streets around the funeral route were jammed with people paying their last respects as some 50,000 people braved rain to view the casket, which lay in repose on the lobby of the Nixon Library. Nixon died on the 22nd, after suffering a stroke a few days earlier. President Clinton proclaimed this a national day of mourning.

And that’s just a little of what went on, this rather momentous and historic day of April 27th in 1994, as presented by The CBS World News Roundup.
Transcripts
Back to Top
New South African police arrest 31 in political bombings. Nation mourns Richard Nixon as president Clinton leads funeral killer, tornadoes strike again in the midwest, good Wednesday morning. Bill lynch with the CBS world news rounder. As South Africans of all races turned out to vote in huge numbers under a new national flag and a new equal rights constitution. Police announced they have broken up a ring of white extremists responsible for political bombings. 31 persons have been arrested, quantities of weapons, ammunition and explosives have also been ceased. The National Police chief general, Johan van der Merwe said the suspects include a policeman, a reservist, and several members of the extreme right wing Afrikaner resistance movement. More members of that group called A WB are being sought. Van Romero said the bombings in which 21 people have died were meant to derail the election. He denied there was any organized
Up Next
Popular Playlists
Best Yoga Podcasts: Listen & Learn New Poses Sour Shoe's Greatest Moments on The Howard Stern Show Listen to: Top 15 Funniest Barack Obama Quotes 9 Game Design Podcasts Every Game Designer Needs to Hear 7 Podcast Episodes About The Golden State Killer That Will Keep You Up at Night David Parker Ray & Shocking Audio of the Toy Box Killer You Need to Hear Best UFO Podcasts That Will Abduct Your Mind Controversial Joe Rogan Experience Episodes Audio Wack Packer Beetlejuice Best Moments on The Howard Stern Show 12 Best Episodes of the NoSleep Podcast to Keep You Up at Night Sexy ASMR Audio to Turn You On
Popular Categories
ASMR Business & Tech Cannabis Fashion & Beauty Gaming History Home & Garden Kids & Family Spirituality Travel
Add to playlist
New playlist