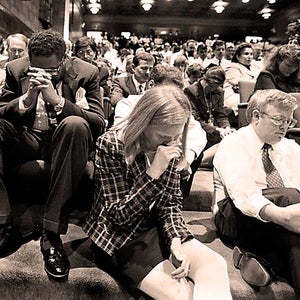 April 6, 1996 – Tragedy At Dubrovnik – Death Of Ron Brown – The Freemen Standoff - click on the snippet for a sample.

From Audio: April 6, 1996 - Tragedy At Dubrovnik - Death Of Ron Brown - The Freemen Standoff

Start Time: 00:03 End Time: 01:03
A somber weekend – the bodies of Commerce Secretary Ron Brown and 32 associates were flown back to Washington from Dubrovnik Croatia where Brown’s plane crashed, killing all on board. President Clinton was particularly saddened by the deaths, calling Ron Brown his great and good friend. Brown and th
Category: News & Politics
Publish Date: Apr 06, 2021
Snipped By:
Share
station description Past Daily: News, History, Music And An Enormous Sound Archive.

Past Daily: Amazing Historical Concerts & News
Tagged in this Audio:
More
Jump to Full Description Transcript
Playlists that April 6, 1996 – Tragedy At Dubrovnik – Death Of Ron Brown – The Freemen Standoff - click on the snippet for a sample. appears on.
Share

Past Daily: News Junkies
05:49:19 11/2/20 82 audios
Up Next
Full Description
Back to Top
A somber weekend – the bodies of Commerce Secretary Ron Brown and 32 associates were flown back to Washington from Dubrovnik Croatia where Brown’s plane crashed, killing all on board. President Clinton was particularly saddened by the deaths, calling Ron Brown his great and good friend. Brown and the others were part of a team sent to Dubrovnik to set up re-building efforts for the war-torn Croatia.

In other news – a group calling itself The Freemen, holed up in a compound in Montana, was continuing its standoff, but it wasn’t clear for how much longer. At news time, it was confirmed that two people from the compound left during the night, surrounded by FBI Agents. When asked if more of the group were planning on exiting the compound, an FBI Agent was heard to say “you’re on the right track”.

The Unabomber case was taking shape as FBI Agents were busy sifting through a mountain of evidence seized at the cabin of Math Professor Theodore Kaczyinski near Helena Montana. So far, FBI and ATF Agents have found chemicals and bomb making materials in the cabin. Kaczynski was being held in a single cell with glass windows for close watch. Officials said he was not suicidal.

Meanwhile, Charles Ray Polk, the man convicted of attempting to blow up an IRS center in Austin Texas faced a life sentence for what was characterized as a consuming hatred for the IRS.

Convicted Child Molester and Sex Offender Larry Don McQuay, scheduled to be released from prison in a few days, requested to be castrated before his release. McQuay who was convicted of molesting more than 200 children, said he would continue abusing children after he was released and promised to kill his next victim unless the castration took place.

And the infamous Menendez Brothers re-trial was taking another bizarre twist, with revelations a Psychiatrist edited his notes at the request of Leslie Abramson, Eric Menendez‘ high-profile Attorney. The new allegations raised the question of Attorney misconduct and there was a move for a mistrial. After several hours of closed-door meetings, Judge Stanley Weisberg dismissed the request for a mistrial and the proceeding lurched forward.

All this, and a whole pile more mayhem and grief, this April 6th in 1996, as reported by The CBS World News Roundup.
Transcripts
Back to Top
Yeah, it is a somber weekend for Americans. Sadness for fallen patriots is being expressed here at home and far away. Yeah, the mournful bugle was sounded at the airport in Dubrovnik, Croatia, as the bodies of Commerce Secretary Ron Brown and 32 others were placed aboard to military transports for the journey home. Attribute was spoken by U. S Ambassador to Croatia Peter Galbraith. As Jesus said in the sermon on the Mount, Blessed are the peacemakers, for they shall be called the Children of God. Blessed indeed are those who perished on a mission of peace. Yeah, I'm Mark Knoller in Washington. It will be another day of mourning, remembrance and tribute. President Clinton will be a Dover Air Force Base in Delaware this afternoon, as the remains of those killed in that plane crash in Croatia are returned to American soil.
Up Next
Popular Playlists
Best Yoga Podcasts: Listen & Learn New Poses Sour Shoe's Greatest Moments on The Howard Stern Show Listen to: Top 15 Funniest Barack Obama Quotes 9 Game Design Podcasts Every Game Designer Needs to Hear 7 Podcast Episodes About The Golden State Killer That Will Keep You Up at Night David Parker Ray & Shocking Audio of the Toy Box Killer You Need to Hear Best UFO Podcasts That Will Abduct Your Mind Controversial Joe Rogan Experience Episodes Audio Wack Packer Beetlejuice Best Moments on The Howard Stern Show 12 Best Episodes of the NoSleep Podcast to Keep You Up at Night Sexy ASMR Audio to Turn You On
Popular Categories
ASMR Business & Tech Cannabis Fashion & Beauty Gaming History Home & Garden Kids & Family Spirituality Travel
Add to playlist
New playlist