April 7, 1996 – The Taking Of Ted the Hermit – Capturing The Unabomber. Click on the snippet for a sample of all that and more. 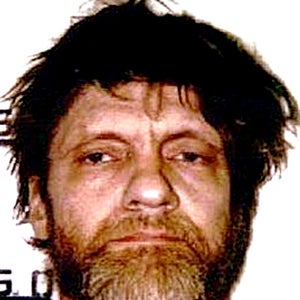 From news that notorious Unabomber suspect Ted Kaczynski was now in custody, and that Federal agents were gingerly going through his remote cabin, searching for clues and wary of booby-traps. Evidence against the Unabomber was piling up, while neighbors of Ted the Hermit were expressing shock. Not so, the people still left on The Unabomber’s list.

While that was going on, the standoff continued outside the Free Men Ranch in Garfield County, Montana. The gun-toting Separatist group, making their own laws and printing their own money, ran afoul of local officials who, with one Sheriff and one Deputy, were powerless to stop the dozen or so heavily armed militia, so they called in the Feds. Negotiations ensued.

The death of Commerce Secretary Ron Brown in a plane crash sent shockwaves all through Capitol Hill. Brown, and 34 others were also killed when the plane they were traveling in, crashed into a mountain on approach to Dubrovnik airport, were heading to Croatia as part of a promotion for U.S. companies to do business in Croatia and make investments in the region, recovering from a bitter civil war. Tributes poured in, and President Clinton paid special tribute to his friend and supporter.

President Clinton also paid tribute to the victims of the Oklahoma City bombing, which happened nearly a year ago this week, and to celebrate the rebuilding process taking place on the site of the Alfred P. Murrah Federal Building, ground-zero of the deadly truck-bombing which took some 169 lives.

Also paying tributes were many friends and colleagues of former Mayor Carl Stokes of Cleveland, who died earlier in the week from complications of Cancer at 68.

And shades of Rodney King echoed all through Southern California this week in 1996 as several Sheriff’s Deputies were videotaped hauling a driver and passengers out of a truck, carrying suspected illegal aliens, and beating them severely after they were arrested and handcuffed. Riverside Country Sheriff’s were reported to have suspended the accused officers pending investigation.

All that, and a whole lot more for the week, ending this April 7th in 1996, as reported on ABC Radio’s World News This Week and News On The Hour.
Transcripts
Back to Top
that would be a good Easter present. The pope blessing the crowd of 100 people at ST Peter's Square on this Easter Sunday. It's been a beautiful Easter there, the pope giving his greeting in 57 languages. Thousands of pilgrims made it to Easter Mass. In Jerusalem. People arrived in the Old City despite tightened security after the recent bus bomb attacks in Israel. Back in the States, a lot of kids are up now hunting for the hen fruit. There is plenty to go around. A normal week during the year would involve sales of about 72 million dozen of eggs. And Purdue University expert Dr Lee Schrader says Americans by about 36 million dozen extra eggs right before Easter, so they'll have plenty to paint and put in the baskets. President Clinton will be delivering the eulogy for Ron Brown. The exact funeral plans are not quite set, but the commerce secretary, who died in that Croatian plane crash will be buried at Arlington National Cemetery. Bronze casket and those of 32 other American victims were flown this weekend to Dover Air Force Base in Delaware. The president was there, too, See them return home. He also comforted the families. For several hours. A 7 47 carrying the space shuttle Atlantis had to return to Edwards Air Force Base when an engine warning light came on. The shuttle delayed now, and it may be Ferried back to the Kennedy Space Center in Florida, but not before this coming Thursday. You're listening to ABC News. When the Soviets beat the U. S basketball team in the 72 Olympics, America was outraged when America's superstar speedskater lost in 92. We were shocked. But when our kids scored 14th in an international mathematics competition, we didn't even notice. America's schools haven't kept pace with the rest of the world. We haven't raised our standards as faster as far as other countries. As a result, we're losing our ability to compete economically, but it's not too late to turn things around in some places. It's already beginning to happen to find out how together we can bring about the kind of improvement we desperately need, Call 1 809 6 promise we'll send you a free booklet outlining how we can keep the promise of a real education for all of America's Children. and put ourselves back in the lead. A message from the Education Excellence Partnership and the Ad Council. What's up in the Montana case involving a UNA bomb suspect, Ted Kaczynski remains in the Lewis and Clark County Jail under 24 hour surveillance. The sheriff says he spends most of his time pacing in his cell. FBI investigators say they are only a third of their way through searching his cabin, in part because they are concerned about possible booby trapped. ABC is James Walker in Helena. Montana says experts have been using a remote controlled robot to look through Kaczynski's cabin after they found a working bomb in there this weekend.
Up Next
Add to playlist
New playlist