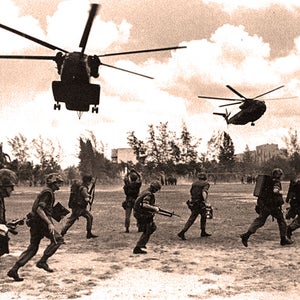 April 8, 1975 – The Bleed-Out – Pressure From The Pentagon Over Vietnam - click on the snippet for a snippet.

From Audio: April 8, 1975 – The Bleed-Out – Pressure From The Pentagon Over Vietnam

Start Time: 00:00 End Time: 02:43
As the situation in Vietnam went from bad to worse to hopeless – the Pentagon was pressuring The White House to pressure Capitol Hill to provide $ 1/2 Billion in immediate Military aid to the South Vietnamese government. Even the Pentagon was less-than-optimistic that this sum would do any good; Pe
Category: History
Publish Date: Apr 08, 2021
Snipped By:
Share
station description Past Daily: News, History, Music And An Enormous Sound Archive.

Past Daily: Amazing Historical Concerts & News
Jump to Full Description Transcript
Playlists that April 8, 1975 – The Bleed-Out – Pressure From The Pentagon Over Vietnam - click on the snippet for a snippet. appears on.
Share

Past Daily: News Junkies
05:49:19 11/2/20 82 audios
Up Next
Full Description
Back to Top
As the situation in Vietnam went from bad to worse to hopeless – the Pentagon was pressuring The White House to pressure Capitol Hill to provide $ 1/2 Billion in immediate Military aid to the South Vietnamese government. Even the Pentagon was less-than-optimistic that this sum would do any good; Pentagon Officials were hoping it would be a delaying tactic, and offered a somewhat feeble assessment that the South Vietnamese Army could “turn this thing around if we sent in enough equipment”. Trouble was, the South Vietnamese Army was busy abandoning U.S. equipment as fast as it arrived. And many on Capitol Hill realized that; saying it as pointless to keep sending in military aid if the Army wasn’t willing to turn the tide around. A few Hawks insisted the situation was not hopeless, and that Military Aid could be used as a bargaining chip in negotiating a peace settlement with North Vietnam – although, it was difficult to imagine just how that would work, and the answers were obscure at best. Most felt the South Vietnamese government wasn’t showing any viable form of leadership and that what was really at stake was another wholesale U.S. boots-on-the-ground involvement in Vietnam – and that wasn’t going to happen any lifetime soon. But all felt that President Ford would have to be extremely persuasive in order for Congress to go along with more Military aid for South Vietnam. It was felt that for too long, Congress rubber-stamped requests for more military aid without any bottom line in sight. According to Senate Majority Leader Mike Mansfield, the message to the Pentagon was – “enough was enough”.

And on top of all that, a disgruntled member of the South Vietnamese Air Force went on a bombing run of the Presidential Palace in Saigon. At first it was feared a military coup was in the making, but later it was discovered the bomber was a pilot, upset that the government didn’t evacuate his family from Da Nang before it was captured by the North Vietnamese. 3 people were killed on the ground.

Meanwhile – other events happened on this April 8th in 1975. Rumors of successful negotiations in what was hoped to be a settlement in fighting in Cambodia between government forces and the Khmer Rouge. Exiled Cambodian President Lon Nol was reported to be flying to North Vietnam for talks with officials there.

Orphans were arriving in the U.S. from Saigon, but it was reported those airlifts may slow down. Questions arose as to why so many orphans were sick and criticisms were leveled at U.S. Aid agencies who were funding relief efforts, but that the money was going to the South Vietnamese government, rather than directly to relief efforts.

It was also discovered that secret agreements had been struck between the U.S. and the government of South Vietnam. When pressed as to the nature of those agreements, White House and State Department officials offered no comment.

On Capitol Hill – at the bribery trial of John Connally, the Defense finished cross-examination of Jake Jacobsen, a Texas lawyer and one-time friend of Connally as well as Bob Lilly, the Dairy Industry lobbyist who claimed to have given Jacobsen the money which was then given to Connally. Connally’s defense claimed Jacobsen pocketed all the money and that Connally never received any of it. And around and around it went.

Also on this day, baseball great Frank Robinson went to work as the first Black Player/Manager of the Cleveland Indians Baseball team, the first major league Baseball team to do so. His first day on the job – Robinson the Player hit a home run – Robinson the Manager saw his team beat the New York Yankees 5-3.

And that’s a small slice of what went on, this April 8th in 1975, as presented by NBC Nightly News.
Transcripts
Back to Top
uh, this is NBC Nightly News, Tuesday, April 8th with John Chancellor reporting from the NBC News Center in New York. Good evening. It was reported from Washington today that President Ford has been asked to supply more than half a billion dollars in military aid to be sent to South Vietnam as quickly as possible. The Associated Press quotes officials in the State Department is saying that's the recommendation of General Frederick Weyand, the chief of staff of the Army, who has just returned from Vietnam. Wiant said in public today that South Vietnam will fight on if enough aid is provided somewhat softer Line was taken by Assistant Secretary of State Philip Habib, who said there is a chance that additional military aid could save the Saigon regime. Here are two reports the administration would like a lot more military aid for South Vietnam, but apparently it will settle for less enough not necessarily to save the Saigon government, but at least to put it in a position where it can negotiate a political settlement rather than have to surrender. Mhm. General Wyatt argued before congressional committees today that there was a chance to salvage something he said the South Vietnamese are under heavy pressure, but they have not lost their will, no question in my mind, but that they will fight. They've been through a very traumatic experience. No, they cannot. With a coral background provided by a visiting high school group, Senator John Stennis, that military aid could give Saigon negotiating strength if they make a strong military showing where some additional aid, then it's a question of what is North Vietnam willing to pay in military efforts and expenditures, and everything else will make it war. But they're willing to pay the price of the emasculating. These people are what they give them some kind of terms. So some congressmen, though not many, feel any kind of emergency military aid, will help Saigon. Robert Kowalski, NBC News Washington At the Senate Foreign Relations Committee, Assistant Secretary of State Philip Habib found the going tough trying to convince the committee that there is a chance for South Vietnam provided against more military aid from the United States. The administration told the committee the situation there is not hopeless. They do not lay before us any idea that they expected collapse. My conclusions are that the South Vietnamese cannot continue as a viable state unless there is heavy additional military aid. Yeah,
Up Next
Popular Playlists
Best Yoga Podcasts: Listen & Learn New Poses Sour Shoe's Greatest Moments on The Howard Stern Show Listen to: Top 15 Funniest Barack Obama Quotes 9 Game Design Podcasts Every Game Designer Needs to Hear 7 Podcast Episodes About The Golden State Killer That Will Keep You Up at Night David Parker Ray & Shocking Audio of the Toy Box Killer You Need to Hear Best UFO Podcasts That Will Abduct Your Mind Controversial Joe Rogan Experience Episodes Audio Wack Packer Beetlejuice Best Moments on The Howard Stern Show 12 Best Episodes of the NoSleep Podcast to Keep You Up at Night Sexy ASMR Audio to Turn You On
Popular Categories
ASMR Business & Tech Cannabis Fashion & Beauty Gaming History Home & Garden Kids & Family Spirituality Travel
Add to playlist
New playlist