Your changes have been saved
All Audio Today, Explained

Audio from a Juneteenth Celebration 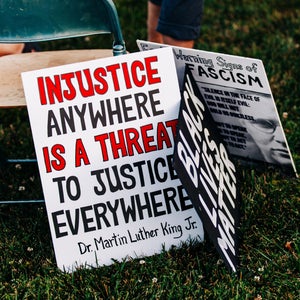 Learn About Juneteenth: Past and Present
01:26:17 6/11/21 14 audios
Up Next
Full Description
Back to Top
An interviewer at a Juneteenth celebration in Texas asks three people to explain why Juneteenth matters to them. One interviewee says that Juneteenth is important to her because it's the day she became a person and not a number. Another says that Juneteenth signifies his human right to live free of oppression. One native Texan says that it commemorates his freedom as an American.
Transcripts
Back to Top
uh it is so important to me just because it's like, it's the day that I became like a person rather than a slave or like a number celebrating it. It's like celebrating your culture and your legacy and the things that your ancestors did to get you where you are today and know that you're going to do those things to get your, you know, your future kids and their kids and their kids to a better place than we are now. Just because slavery is technically, and it doesn't mean that everything's like happy and dandy and equal. And so it's like juneteenth is still so significant because of like the, I don't want to call them civil rights battles, but just because of the battles that we still face in the african american community, I don't believe that oppression is something that we should live under or be subjected to and so on a personal level. Um it's my, it's my human right to be able to, to live equally and thrive as equally amongst our brothers and sisters. For me, juneteenth celebrates my freedom in America. Uh fourth of july Independence Day does not celebrate my freedom in America, but juneteenth does. I am a native Texan and native houstonians. I've also already said I was born in Third War, raised in Third War Emancipation Park. So this date commemorates my freedom as an american name. Mhm.
Up Next
Popular Playlists
Best Yoga Podcasts: Listen & Learn New Poses Sour Shoe's Greatest Moments on The Howard Stern Show Listen to: Top 15 Funniest Barack Obama Quotes 9 Game Design Podcasts Every Game Designer Needs to Hear 7 Podcast Episodes About The Golden State Killer That Will Keep You Up at Night David Parker Ray & Shocking Audio of the Toy Box Killer You Need to Hear Best UFO Podcasts That Will Abduct Your Mind Controversial Joe Rogan Experience Episodes Audio Wack Packer Beetlejuice Best Moments on The Howard Stern Show 12 Best Episodes of the NoSleep Podcast to Keep You Up at Night Sexy ASMR Audio to Turn You On
Popular Categories
ASMR Business & Tech Cannabis Fashion & Beauty Gaming History Home & Garden Kids & Family Spirituality Travel
Add to playlist
New playlist