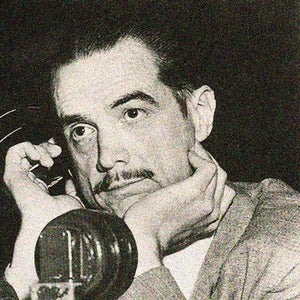 Start Time: 00:00 End Time: 02:58
On this day in 1947, eyes and ears were riveted to the goings on in Capitol Hill in the form of testimony by Howard Hughes, during a Senate Investigation of wartime contracts issued to the Aeronautic pioneer-cum-Hollywood Producer and allegations of wrongdoings. In true Shakespearean terms, it was
Category: News & Politics
Publish Date: Aug 06, 2021
Snipped By:
Share
station description Past Daily: News, History, Music And An Enormous Sound Archive.

Past Daily: News Junkies
05:49:19 11/2/20 82 audios
Up Next
Full Description
Back to Top
On this day in 1947, eyes and ears were riveted to the goings on in Capitol Hill in the form of testimony by Howard Hughes, during a Senate Investigation of wartime contracts issued to the Aeronautic pioneer-cum-Hollywood Producer and allegations of wrongdoings. In true Shakespearean terms, it was “sound and fury, signifying nothing”. But it was August . . . Howard Hughes: “ Sometime previously I had heard that this investigation was brewing. I also heard that Pan-American was behind it. And I thought, rather than wait until I was subpoenaed and embarrassed, that I would offer voluntarily to testify. Senator Ferguson: “And it was in relation to the two contracts that you were speaking about testifying before his committee, that is the War Investigating Committee?” Hughes: “In relation to this very matter under discussion here.” The person making the allegations was Senator Owen Brewster (R-Maine) who chaired the War Investigating Committee. While Hughes accused Brewster of improprieties, Brewster countered with a few allegations of his own. Senator Owen Brewster: “I proceeded as promptly as I could to take the action that seemed to be clearly indicated, since there seemed to be an attempt to suggest that if I should continue further with this matter I would have personal occasion for regret. That I, and my associations were to be challenged and placed in possible disrepute if I dared to proceed with this matter.” Hughes was adamant that the entire investigation had something to do with Juan Trippe, a competitor of Hughes who founded Pan-American Airways and that this was something of a personal feud that wound up involving the government. And the end result was, yes it did. The investigation was dropped when it was discovered Juan Trippe had lobbied heavily for investigating Hughes through his old friend, Senator Owen Brewster. And that’s what went on, this August 6th in 1947, as recapped by Mutual News as a Special Feature broadcast while the hearings took place.
Transcripts
Back to Top
This is Winthrop Sherman in Washington, Hollywood aviator. Howard Hughes clashed in dramatic fashion today with Republican Senator Owen brewster of Maine before the Senate war investigating committee. Mutual recorded the entire proceedings of the committee today. And we are now going to take you by recording to this sensational hearing, allow you to hear the charges and denials of the two prominent americans in their own voices as they spoke on the witness stand. The background is the big white marble caucus chamber of the Senate office building. It is packed with eager Spectators. They gave howard Hughes a burst of applause as he entered, A tall, thin, gaunt faced man with a little black moustache. The inquiry into Mr Hughes wartime aviation contracts. His sidetracked while the committee hears his charges against Republican Senator brewster of Maine. Senator Ferguson of michigan refers to these charges as a side issue. He addresses the witness. What is it that you want to tell the committee in relation to this uh side issue as the committee now sees it? Uh I don't have any particular desire to tell the committee anything. I think the committee is thoroughly familiar with it. I have made certain statements to the press and I stand by those uh Senator brewster has then said that he would like me to repeat those statements under oath. I have no objection to so doing. I think however, if I do so, Senator brewster should take the stand, allow me to cross question him and allow me to bring in such other witnesses as I desire to clarify the issue well, and now I just uh this has been discussed by the subcommittee. The understanding of the subcommittee that we will apply the regular rules as far as cross examination the committee. The subcommittee will not give to Senator brewster the right to cross examine you, nor will you have the right to cross examine Senator brewster, but we will apply the rule that has been applied to the committee hearings ever since the chairman of the subcommittee has been on it. And I understand before that that if there are any question you or your council have, if you will submit them to the committee or if Senator brewster will submit them to the quest to the committee, then we will ask those questions. But we'll do it in that way because the same rule was applied to other witnesses and will be applied here. And it's too that this part of the case, while Senator brewster is a member of the whole committee, the chair in the committee uh subcommittee as a whole feels that he should have only
Up Next
Add to playlist
New playlist