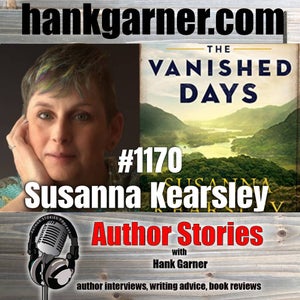 
&#8220;I&#8217;ve loved every one of Susanna&#8217;s books! Bedrock research and a butterfly&#8217;s delicate touch with characters—historical fiction that sucks you in and won&#8217;t let go!&#8221; —Diana Gaba
Category: Audiobooks & Stories
Publish Date: Oct 07, 2021
Tagged in this Audio:
More
Jump to Full Description
Snippets are a new way to share audio!
You can clip a small part of any file to share, add to playlist, and transcribe automatically. Just click the to create your snippet!
Snippets: Clips of Author Stories Podcast Episode 1170 | Susanna Kearsley Interview that people like

There are currently no playlists containing this audio.
Add this audio track to one of your playlists
Add to Playlist
Up Next
Full Description
Back to Top
Today&#8217;s author interview guest is Susanna Kearsley, author of The Vanished Days.


&#8220;I&#8217;ve loved every one of Susanna&#8217;s books! Bedrock research and a butterfly&#8217;s delicate touch with characters—historical fiction that sucks you in and won&#8217;t let go!&#8221; —Diana Gabaldon, #1 New York Times bestselling author of Outlander
From international bestselling author Susanna Kearsley comes a historical tale of intrigue and revolution in Scotland, where the exile of King James brought plots, machinations, suspicion and untold bravery to light. Told partially in flashbacks, The Vanished Days weaves in and out of the timeline of the author&#8217;s beloved New York Times bestseller The Winter Sea, unraveling an investigation into a young widow&#8217;s secrets to unveil a plot that resonates to the highest echelons of Scotland&#8217;s social and political leaders.
In the autumn of 1707, old enemies from the Highlands to the Borders are finding common ground as they join to protest the new Union with England. At the same time, the French are preparing to launch an invasion to bring the young exiled Jacobite king back to Scotland to reclaim his throne, and in Edinburgh the streets are filled with discontent and danger.
Queen Anne&#8217;s commissioners, seeking to calm the situation, have begun paying out money sent up from London to settle the losses and wages owed to those Scots who took part in the disastrous Darien expedition eight years earlier—an ill-fated venture that left Scotland all but bankrupt.
When the young widow of a Darien sailor comes forward to collect her husband&#8217;s wages, her claim is challenged. One of the men assigned to investigate has only days to decide if she&#8217;s honest, or if his own feelings are blinding him to the truth.
Set at the cusp of the eighteenth century, in the midst of the Jacobite Rebellion, The Vanished Days is a brilliantly told story of espionage, loyalties divided, boundless courage and enduring love.
New York Times and USA Today bestselling author and RITA award winner, Susanna Kearsley is known for her meticulous research and exotic settings from Russia to Italy to Cornwall, which not only entertain her readers but give her a great reason to travel. Her lush writing has been compared to Mary Stewart, Daphne Du Maurier, and Diana Gabaldon. She hit the bestseller lists in the U.S. with The Winter Sea and The Rose Garden, both RITA finalists and winners of RT Reviewers&#8217; Choice Awards. Other honors include finaling for the UK&#8217;s Romantic Novel of the Year Award, National Readers&#8217; Choice Awards, and the prestigious Catherine Cookson Fiction Prize. Her popular and critically-acclaimed books are available in translation in more than 20 countries and as audio books. She lives in Canada, near the shores of Lake Ontario.
Up Next
Popular Playlists
Best Yoga Podcasts: Listen & Learn New Poses Sour Shoe's Greatest Moments on The Howard Stern Show Listen to: Top 15 Funniest Barack Obama Quotes 9 Game Design Podcasts Every Game Designer Needs to Hear 7 Podcast Episodes About The Golden State Killer That Will Keep You Up at Night David Parker Ray & Shocking Audio of the Toy Box Killer You Need to Hear Best UFO Podcasts That Will Abduct Your Mind Controversial Joe Rogan Experience Episodes Audio Wack Packer Beetlejuice Best Moments on The Howard Stern Show Best NoSleep Podcast Episodes To Terrify You Sexy ASMR Audio to Turn You On
Popular Categories
ASMR Business & Tech Cannabis Fashion & Beauty Gaming History Home & Garden Kids & Family Spirituality Travel
Add to playlist
New playlist