Your changes have been saved
All Audio The XD Experience

Bob Lazar on His Employment

Start Time: 04:23 End Time: 09:43
Lazar speaks for himself in this 1989 interview on his employment that opened his eyes to the conspiracy around him.
Category: Society & Culture
Publish Date: Jun 23, 2021
Snipped By:
Share 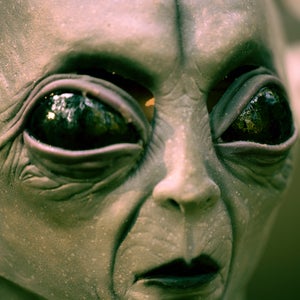 Inside Area 51: The Most Intense Bob Lazar Claims
01:08:30 11/12/20 10 audios
Up Next
Full Description
Back to Top
In this interview with Lazar, he appears anonymous, calling himself "Dennis". This is the interview that put Lazar on the map as he talked about some of this things he saw while he was working. But some of his claims may be stranger than fiction.
Transcripts
Back to Top
a very infrequent basis. How are you transported to and from work at the time that I was working there at Mccarran International Airport in las Vegas. There was special projects E. G. And G. Building. Okay when I was told to go to work I drove there, parked my car there and got in a plane at the airport, flew to groom link, right? Deplaned and waited for a bus and the bus drove me down to. As for the S. Four facility is an area just off the papoose lake bed dry like that. And it consists of nine hangers. The hangars have sloped doors on them with a sand texture coating around the opposite end of the hangers. There's the standard entrance where you're dropped off at go through a security check. And inside there's a small complex. Uhh there is some office space, there's several laboratories, the hangers themselves of course and a few other places. I didn't have free rein to go wherever I wanted to everywhere I went to. I was essentially escorted. So uh that was really all about that. Uh I saw inside the facility what was the basic layout where they're underground levels? I don't think there were any underground levels to it though there could have been I don't think it was you know an extensive underground facility. It just looked like an installation that was butt up against a mountain. And you know I didn't see any evidence of any stairs going down elevators or but like I said I don't know there could have been and I just might not have been permitted in those areas. It's difficult to to really surmise how long it had been operational. Everything did look fairly new uh by that. I mean I don't think this installation was there in the early seventies. Uh nothing was worn, things look fairly freshly painted. So you know as a ballpark guess I would say it would, it would really surprise me if the installation was older than 57 10 years, something like that. His burden made us killed in the project. What exactly happened there allegedly? Obviously I didn't see this and I don't know what to be fact, but this is what I was told that I was hired to replace one of a couple people that were killed while working on one of the reactors from one of the crafts. Apparently they, for whatever reason cut open and operating reactor and the device exploded, killing both of them. The scientists that were killed there, allegedly the detonation from the explosion was fairly large. It would have rivaled a small tactical nuke. So it was done at the Nevada test site and it was to be passed off as an unannounced nuclear nuclear test. Did you have any direct contact or communication with aliens? No, not at all. Tell us about the briefing files. Under what conditions did you gain access to them? I was put into the briefing room with 121 or 22 briefings and really was just told to sit and read through them. I think they were there just to mainly educate me on what was going on. They were in a complete, in in depth explanation on everything else. But just essentially a brief synopsis on some of the other projects that were going on there, supposedly the information. Now this isn't something that I determined, it's something I was told that the crafts originated from uh planet that orbited the Zeta, particularly star systems that are particularly one and particularly two or 22 stars of a binary star system. The craft allegedly came from there. One or two autopsy photographs I saw dealt with just a small photograph. A bus shot essentially just head, shoulders and chest of an alien. With a chest was cut open in T. Fashion and one single organ was removed. Uh huh. The organ itself and the other picture was cutting vivisection essentially the showing the different chambers in there. This was totally unrelated to anything I was doing. But from that photograph it looked like what you see in Ufo lore as the typical grey. So how tall it was from what I could see. I couldn't tell because I only saw the portion of the photograph. But if everything else you see is correct, I would imagine it was 3.5 or four ft tall. But there again, all I had to see was a photograph and nine that brought the alien exchange program of information to a halt Again, this was a story that was relayed to me and allegedly what happened in 79. There was some sort of information exchange going on where they were actually.
Up Next
Popular Playlists
Best Yoga Podcasts: Listen & Learn New Poses Sour Shoe's Greatest Moments on The Howard Stern Show Listen to: Top 15 Funniest Barack Obama Quotes 9 Game Design Podcasts Every Game Designer Needs to Hear 7 Podcast Episodes About The Golden State Killer That Will Keep You Up at Night David Parker Ray & Shocking Audio of the Toy Box Killer You Need to Hear Best UFO Podcasts That Will Abduct Your Mind Controversial Joe Rogan Experience Episodes Audio Wack Packer Beetlejuice Best Moments on The Howard Stern Show Best NoSleep Podcast Episodes To Terrify You Sexy ASMR Audio to Turn You On
Popular Categories
ASMR Business & Tech Cannabis Fashion & Beauty Gaming History Home & Garden Kids & Family Spirituality Travel
Add to playlist
New playlist