Your changes have been saved
All Audio ‎Supreme Court Opinions 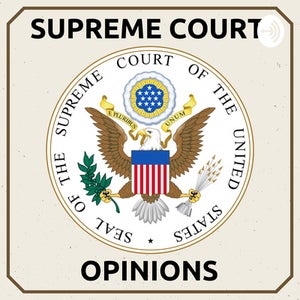 BP PLC v Mayor and City Council of Baltimore was a case in the United States Supreme Court dealing with matters of jurisdiction of various climate change lawsuits in the United States judicial system.
Background.
Around 2017, multiple cities in the United States began filing lawsuits against oil & g
Category: Business & Tech
Publish Date: Oct 11, 2021
Tagged in this Audio:
More
Jump to Full Description
Snippets are a new way to share audio!
You can clip a small part of any file to share, add to playlist, and transcribe automatically. Just click the to create your snippet!
Snippets: Clips of BP P.L.C. v Mayor and City Council of Baltimore that people like

There are currently no playlists containing this audio.
Add this audio track to one of your playlists
Add to Playlist
Up Next
Full Description
Back to Top
BP PLC v Mayor and City Council of Baltimore was a case in the United States Supreme Court dealing with matters of jurisdiction of various climate change lawsuits in the United States judicial system.
Background.
Around 2017, multiple cities in the United States began filing lawsuits against oil & gas companies, asserting their worldwide activities in mining and production of petroleum products were responsible for climate change effects in their cities and states. The lawsuits broadly sought financial compensation from these companies under their individual state laws to recuperate for costs in fighting changes that arose from climate change, such as offsetting the effects of rising sea levels. Some of the early cases, such as those filed in California and New York City, were first filed in the federal court system; these cases were dismissed early as at the federal level, case law persists that federal laws like the Clear Air Act superseded state laws, and it would be up to the legislative and executive branches to take action against the oil companies under these laws, rather that state and local government.
The city of Baltimore, Maryland, filed its suit against 26 oil companies in July 2018, asserting that these companies contributed to 15 percent of the carbon dioxide emissions between 1965 and 2015 that led to the world's climate change that was threatening its shorelines. Instead of in federal court, the city filed it within the Maryland state courts, which legal experts believed was a viable alternative to the federal court, and would likely be more favorable to the city. This was not the only such climate change lawsuit filed at the state level against the oil companies, and as with these other suits, the defendants requested change of venue to the federal courts under the federal-officer removal statute under the Removal Clarification Act at 28 U.S.C. § 1441, since they operated closely with the federal government. The case was moved to the United States District Court for the District of Maryland.
The city subsequently challenged the removal by citing the lack of subject-matter jurisdiction that the federal court had over state laws, which Judge Ellen Hollander agreed to, ordering the case back to the state court. As the standard for removal puts the onus on the party seeking removal, Judge Hollander rejected the reasons given by the oil companies for keeping the case at the federal level. The defendants appealed to the Fourth Circuit on Hollander's order, but the Fourth Circuit upheld it, ruling that the federal-officer exemption did not apply to the companies despite their close-workings with the federal government.