Start Time: 00:04 End Time: 01:46
The Mexican holiday commemorates the Mexican army’s victory at the Battle of Puebla in the Franco-Mexican War. It’s evolved into a festival of Mexican culture.
Category: Comedy
Publish Date: Apr 22, 2021
Snipped By:
Share
station description I love working with creative people to help them produce their best work. Listen to... read more 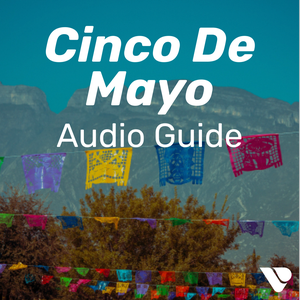 Podcasts About Cinco de Mayo
40:16 4/27/21 9 audios
Up Next
Full Description
Back to Top
The Mexican holiday commemorates the Mexican army’s victory at the Battle of Puebla in the Franco-Mexican War. It’s evolved into a festival of Mexican culture. People celebrate Cinco de Mayo with feasting, music, and dancing.
Transcripts
Back to Top
bio uh is often confused with mexican Independence day. Cinco de Mayo commemorates the Mexicans army victory at the battle of puebla during the franco mexican war back in 18 62. All right, Mexico actually declared its independence 50 years earlier. But americans will celebrate anyway since it's an excuse to uh you know to drink up some salted margaritas. Anyone yeah coladas, anyone. All of that. Yeah, mexican americans living in the US agree that Cinco de Mayo has evolved into a huge festival that celebrates mexican culture and heritage. Heritage. People marked the occasion with elaborate family feast parties, mariachi music and traditional folk dancing. So happy Cinco de Mayo. Thank you. Uh Thank you. What you gonna do tomorrow? You know this is just a mexican holiday. Right? Not latino. Uh We do celebrate mexican culture and heritage but don't we latino? Yeah, I'm just saying it's Cinco de Maya. I'm not sure. I don't want to say the wrong thing I'm asking. Is it it's a mexican holiday or is it a latino holland? Well, it's mexican because it commemorates the mexican army's victory at the back. Okay, cool. Okay. Against France. They won't I coming over here thinking it's going to be some easy wind. No, punks up in here. What makes, yeah, make oh man, take the X out. Make you go through the world you want. So we go.
Up Next
Popular Playlists
Best Yoga Podcasts: Listen & Learn New Poses Sour Shoe's Greatest Moments on The Howard Stern Show Listen to: Top 15 Funniest Barack Obama Quotes 9 Game Design Podcasts Every Game Designer Needs to Hear 7 Podcast Episodes About The Golden State Killer That Will Keep You Up at Night David Parker Ray & Shocking Audio of the Toy Box Killer You Need to Hear Best UFO Podcasts That Will Abduct Your Mind Controversial Joe Rogan Experience Episodes Audio Wack Packer Beetlejuice Best Moments on The Howard Stern Show Best NoSleep Podcast Episodes To Terrify You Sexy ASMR Audio to Turn You On
Popular Categories
ASMR Business & Tech Cannabis Fashion & Beauty Gaming History Home & Garden Kids & Family Spirituality Travel
Add to playlist
New playlist