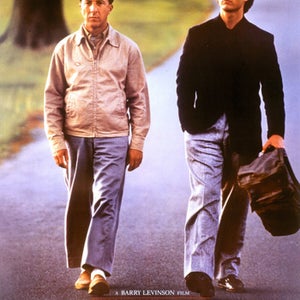 “I don’t have my books, I’m going to be bookless”.  1988’s Rain Man tells the story of Charlie Babbit, a quasi-successful businessman looking to continue his string of high-risk, high-reward deals.  When his estranged father passes, he initially thinks he’s hit the windfall, only to find nearly all
Category: History
Publish Date: Oct 12, 2021
Tagged in this Audio:
More
Jump to Full Description
Snippets are a new way to share audio!
You can clip a small part of any file to share, add to playlist, and transcribe automatically. Just click the to create your snippet!
Snippets: Clips of Cinema Cemetery: Episode 61- Rain Man (1988) that people like

There are currently no playlists containing this audio.
Add this audio track to one of your playlists
Add to Playlist
Up Next
Full Description
Back to Top
“I don’t have my books, I’m going to be bookless”.  1988’s Rain Man tells the story of Charlie Babbit, a quasi-successful businessman looking to continue his string of high-risk, high-reward deals.  When his estranged father passes, he initially thinks he’s hit the windfall, only to find nearly all inheritance has been sent to his long-lost brother Raymond.  Raymond, an “autistic savant” in the film’s terms lives life in a facility, unable to interact with the world on his own.  When Charlie decides to “kidnap” Raymond to gain leverage to regain his inheritance, a cross-country road trip begins.  Part drama, part comedy, part Tom Cruise, and part Dustin Hoffman, Rain Man is a little bit of everything.  Does lightning strike thrice for Mr. Hoffman?  Find out here.Current RankingsLawerence of Arabia  The GodfatherAll About EveThe Godfather Part IIGone With Wind It Happened One NightAmadeus The Deer HunterThe StingAll The King’s MenThe Lost WeekendBridge on the River KwaiOne Flew Over The Cuckoos NestThe French ConnectionOn The WaterfrontThe Sound Of MusicCasablancaAll Quiet on the Western FrontRebeccaIn The Heat of the NightThe Mutiny On The BountyYou Can’t Take It With You MartyMrs. Miniver My Fair LadyPattonGentleman’s AgreementHamletCimarron Ben HurChariots of FireGandhiAnnie HallMidnight CowboyBest Years of Our LivesFrom Here to EternityOliver!Around the World in 80 DaysThe Apartment The Last EmperorThe Great ZiegfeldA Man Of All SeasonsThe West Side StoryWingsGrand HotelRockyOut of AfricaTom JonesKramer v KramerLife of Emil ZolaHow Green Was My ValleyPlatoonAn American in ParisGoing My WayGreatest Show On EarthOrdinary PeopleTerms of EndearmentBroadway Melody CavalcadeGigi
Up Next
Popular Playlists
Best Yoga Podcasts: Listen & Learn New Poses Sour Shoe's Greatest Moments on The Howard Stern Show Listen to: Top 15 Funniest Barack Obama Quotes 9 Game Design Podcasts Every Game Designer Needs to Hear 7 Podcast Episodes About The Golden State Killer That Will Keep You Up at Night David Parker Ray & Shocking Audio of the Toy Box Killer You Need to Hear Best UFO Podcasts That Will Abduct Your Mind Controversial Joe Rogan Experience Episodes Audio Wack Packer Beetlejuice Best Moments on The Howard Stern Show Best NoSleep Podcast Episodes To Terrify You Sexy ASMR Audio to Turn You On
Popular Categories
ASMR Business & Tech Cannabis Fashion & Beauty Gaming History Home & Garden Kids & Family Spirituality Travel
Add to playlist
New playlist