Share
station description NPR's Up First is the news you need to start your day. The three biggest stories of... read more

As the European Medicines Agency determines that the AstraZenica COVID-19 Vaccine is safe, the U.S. will send millions of doses of the vaccine to Canada and Mexico. President Biden and Vice President Harris head to Georgia in the aftermath of this week's shootings. And, FBI Director Christopher Wray
Category: News & Politics Daily News
Upload Date: Mar 19, 2021
Jump to Full Description
Snippets are a new way to share audio!
You can clip a small part of any file to share, add to playlist, and transcribe automatically. Just click the to create your snippet!
Snippets: Clips of Friday, March 19, 2021 that people like
Add to Playlist
Share 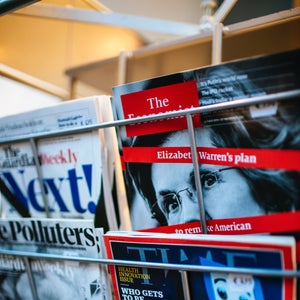 Top New Podcasts 3/15/21-3/19/21
03:11:43 3/19/21 5 audios
Up Next
Full Description
Back to Top
As the European Medicines Agency determines that the AstraZenica COVID-19 Vaccine is safe, the U.S. will send millions of doses of the vaccine to Canada and Mexico. President Biden and Vice President Harris head to Georgia in the aftermath of this week's shootings. And, FBI Director Christopher Wray says the threat of right-wing extremism is growing.
Snippet Transcripts

Snippet of NPR's Up First: Astra-Zeneca Vaccine Deemed Safe, Doses Shipped to Canada and Mexico
01:20-05:11
After a few days of concern, AstraZeneca's Covid 19 vaccine appears to be back in the game. More than a dozen countries pause their useless shot over worries about a possible link to blood clots. But now the European Medicines Agency has determined the vaccine is still safe in the United States is making use of it. You see, while the vaccine is still not yet approved here in the US, the Biden administration is going to send stockpiles to Mexico and Canada, which have approved it. Here's White House press secretary Jen Psaki. The pandemic knows no borders. And ensuring our neighbors can contain the virus is a mission critical step to ending the pandemic, which we'll talk about with NPR global health correspondent Jason Beaubien, whose job title seems perfect for this story. Jason, Good morning. Good morning, Steve. Why is the administration changing its plans here for AstraZeneca? You know, there are a couple of reasons. First, these doses can't be used in the US, as we just said, because AstraZeneca hasn't yet won FDA authorization. Also, the U. S. Might not need them in the short term, given production that we're getting from other manufacturers and Finally, it looks good. The U. S is way out ahead of a lot of other countries in terms of how many people it's gotten vaccinated. There's been some criticism that Washington is hoarding doses, so it looks good to be sharing, particularly with your neighbors, good diplomacy and good supply for the United States. For the moment. Wow, Now let's talk about this AstraZeneca vaccine, though, because there was this concern. What did the European Medicines Agency investigation find? So the head of the European Medicines Agency, Amir Cook, she was very definitive about this investigation into safety concerns and said the review committee came to a clear conclusion. This vaccine is a safe and effective option to protect citizens against Covid 19. The Iemma is saying that there's no evidence that these blood clots, which have been found in a few cases in Europe, are linked to the vaccine. That link may be proved later, but right now there isn't the evidence to support that. Sabine Strauss, who led that safety committee at the EMA, points out that blood clots are a fairly common condition. Approximately 100,000 people develop blood clots every month in the European union. So seeing 25 blood clots, which was what the concern was among nearly 20 million people in Europe have been vaccinated with the AstraZeneca vaccine is actually less, she says, than what you would have expected to see in the general population. The EMA is adding some additional warnings to these vaccines. UM, they let people in healthcare workers be on the lookout for severe headaches, unusual bruising, some other symptoms that may indicate that one of these rare blood clots has occurred and are telling them that they should seek help immediately. Are the findings from the European regulators going to calm the world about this vaccine? You know it may not be enough. This vaccine is expected to be the most used immunization globally this year. Some two billion doses of AstraZeneca, more than any other manufacturer, are expected to be administered in 2021. I was talking with Jennifer Nuzzo, who studies vaccines, the global health at Johns Hopkins, uh, at their Center for health security. These nationals decisions to stop using the vaccine even temporarily cast a shadow over the vaccine itself, and she says at the moment in this pandemic, when the goal is to get as many people vaccinated as quickly as possible. These questions and concerns about safety. Even if they're resolved, they can affect vaccination efforts. It doesn't have to be that people are just full out opposed to getting vaccinated. It could also be deadly if people just decide to wait too long to get it. And you know, just looking at Europe, where 20,000 people are dying on the continent every week from Covid. And she's saying the focus needs to be on getting people vaccinated and stopping Covid NPR's Jason Beaubien Thanks for the update.
Up Next
Popular Playlists
Best Yoga Podcasts for Experienced Yogis & for Beginners (Audio) Sour Shoe's Greatest Moments on Howard Stern Listen to: Top 15 Funniest Barack Obama Quotes 9 Game Design Podcasts Every Game Designer Needs to Hear 7 Podcast Episodes About The Golden State Killer That Will Keep You Up at Night David Parker Ray & Shocking Audio of the Toy Box Killer You Need to Hear 8 UFO & Aliens Podcasts That Will Abduct Your Mind Audio Cheat Sheet To The Sexy Liberal Podcast Network Controversial Joe Rogan Experience Episodes Audio Wack Packer Beetlejuice Best Moments on The Howard Stern Show 12 Best Episodes of the NoSleep Podcast to Keep You Up at Night
Popular Categories
ASMR Business & Tech Cannabis Fashion & Beauty Gaming History Home & Garden Kids & Family Spirituality Travel
Add to playlist
New playlist