From Audio: Episode 55: Coaching with JBK Episode 8 - The decline of Arsenal ladies 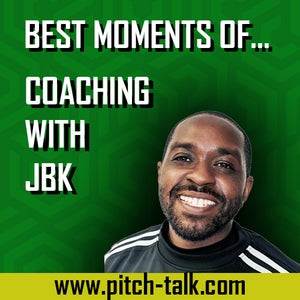 Best moments of Coaching with JBK
46:59 7/2/21 9 audios
Up Next
Full Description
Back to Top
In this episode JBK gives a shout out to Lucy Bronze after she won the FIFA Women's best player title (the first Brit since Michael Owen in 2001) and goes in depth discussing the recent decline of Arsenal FC's Ladies team and their worrying recent record v big/title contender sides. JBK looks at whether or not the evolution of the Women's game has passed Arsenal by or not?
Transcripts
Back to Top
A. B. K. Coaching with J. B. K. Is the blog and you are listening to J. B. K. Himself. Yeah. So, um, I'm going to be speaking on the women's game because again, I'm a coach within the female game and in fact, I'm enjoying my time. I'm so glad that we've for the first time in 19 years. We now have an english. And let me put this in context terms the last english player to win a player of the year or FIFA World Player of the Year was Michael Levin 2001. That was the last player to win it. So the fact that lucy bronze, you've gone and done it well done. I'm just gonna say that to you. Well done. It's amazing. The fact that you've done, you've done it is everybody can see what you've brought to the table is hoping that you could have won it in 2019. But you know what you want in 2020 doesn't matter. You've got, you've got the title now as officially the best player in the world, um for 2020. Well done. But my issue is not about the best player in the world. In fact, it's about the club that I support and I love the most arsenal women. Okay, So I think this is more of a context of arsenal women, but also the context of if I look at it from a coaching point of view, I'm wondering if this is more about the era of women's football, the era. So women's football has been gathering a lot of pace and yes, it's it's slowed down over the last, over the last few months, just simply because of covid where we're going places and then all of a sudden things just seem to curtail. Um We're not we're no longer really on, I don't think women's football is now pretty much being shown on Tv. It's mostly the the apps that the F. A. Put out put out the F. A. Player up so please try and try and watch a few games if you can. But let me go back to what I'm talking about with the era arsenal have been one of the the most consistent teams of winning the league for a long time Over the past The years. 30 years Have a record 15 titles, 14 F. A. Cup. So they've actually got more than the men I think know they've got the same same number of them in so 14 each and they want to leak up numerous times as well. Or in the words of Conte cop in my opinion it might be I might be wrong about that. But what I'm trying to get and what I think is important is Chelsea, Man City and Manchester United have all started to catch up financially and it's actually paying dividends off the pitch at the moment. No, I don't know if it's, that's a, a thing of the past where arsenal have done so well that, that things are moving in that direction. But when I look at, when the, When the results have come out about the top four rivals. So a report was written from somebody that I follow on twitter and maybe you can Suzanne wreck from the Guardian, um, if you get a chance just to have a look at the, the report, the report is literally, As it says, the top four rivals, we have not beaten them since October 2019 and the last time we beat them of any of them, it was Chelsea Nil Arsenal five. So that was the last, the last
Up Next
Popular Playlists
Best Yoga Podcasts: Listen & Learn New Poses Sour Shoe's Greatest Moments on The Howard Stern Show Listen to: Top 15 Funniest Barack Obama Quotes 9 Game Design Podcasts Every Game Designer Needs to Hear 7 Podcast Episodes About The Golden State Killer That Will Keep You Up at Night David Parker Ray & Shocking Audio of the Toy Box Killer You Need to Hear Podcasts About UFO & Aliens That Will Abduct Your Mind Audio Cheat Sheet To The Sexy Liberal Podcast Network Controversial Joe Rogan Experience Episodes Audio Wack Packer Beetlejuice Best Moments on The Howard Stern Show 12 Best Episodes of the NoSleep Podcast to Keep You Up at Night
Popular Categories
ASMR Business & Tech Cannabis Fashion & Beauty Gaming History Home & Garden Kids & Family Spirituality Travel
Add to playlist
New playlist