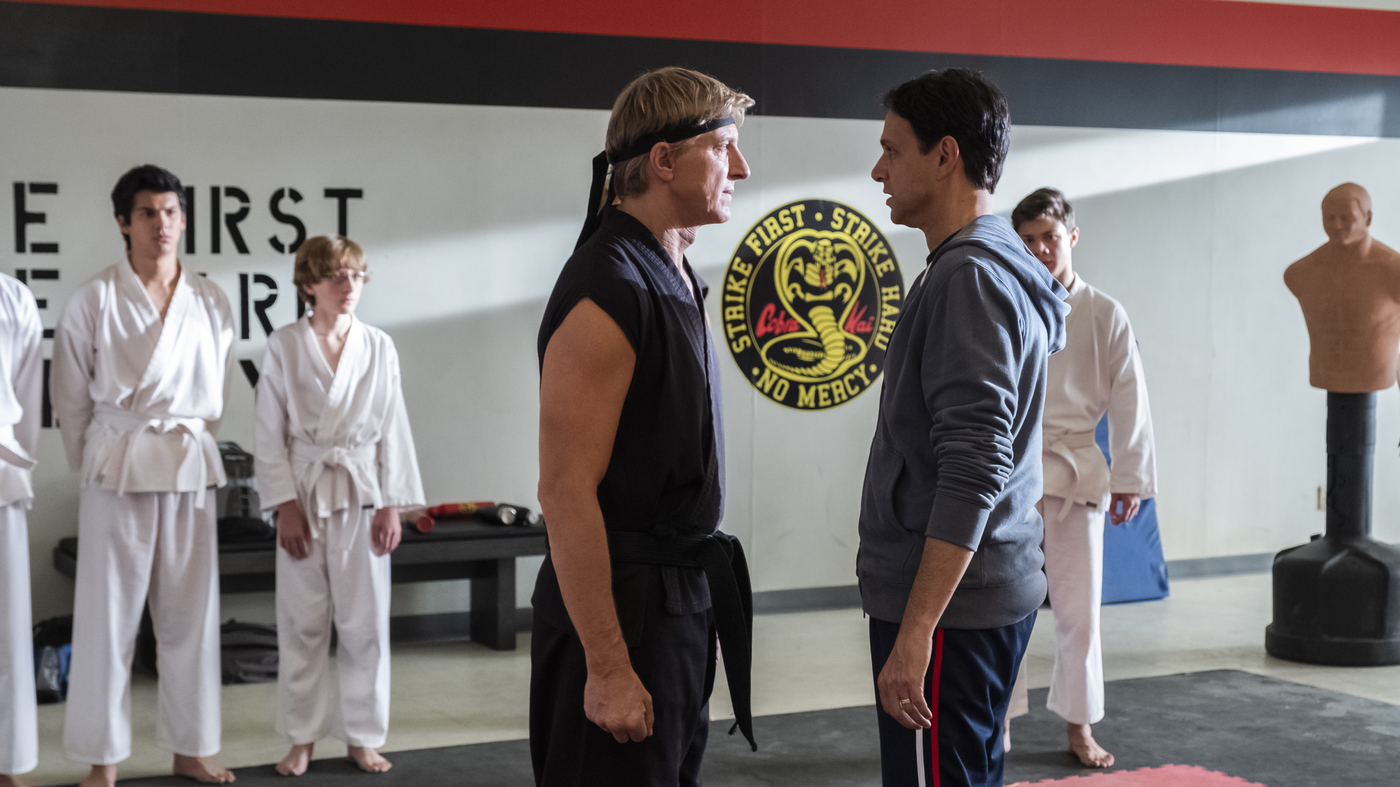 When The Karate Kid ended with a crane kick in 1984, it seemed like it was all over. But then came sequels. Then came a remake. And now we have Cobra Kai, a surprisingly good series that catches up with the film's hero Daniel and villain Johnny many years later. In this encore episode, we revisit ou
Category: Entertainment After Shows
Publish Date: Jan 20, 2021
Tagged in this Audio:
More
Jump to Full Description
Snippets are a new way to share audio!
You can clip a small part of any file to share, add to playlist, and transcribe automatically. Just click the to create your snippet!
Snippets: Clips of Cobra Kai that people like
Add to Playlist
Share

01:44
Cobra Kai
After Shows
Playlists that Cobra Kai appears on.

There are currently no playlists containing this audio.
Add this audio track to one of your playlists
Add to Playlist
Up Next
Full Description
Back to Top
When The Karate Kid ended with a crane kick in 1984, it seemed like it was all over. But then came sequels. Then came a remake. And now we have Cobra Kai, a surprisingly good series that catches up with the film's hero Daniel and villain Johnny many years later. In this encore episode, we revisit our conversation about Cobra Kai from back in 2018 when it premiered on YouTube Red. The show just dropped its third season earlier this month Netflix.
Snippet Transcripts

Cobra Kai
01:15-03:00
download the APP today or visit Teladoc dot com slash NPR. Welcome back with us this week to talk about Cobra Kai is all things considered host Audie Cornish. Hi, Audie Hey! And coming to us from the great state of Florida NPR TV critic Eric Deggans. Hi, Eric. Hey, I'm loving the classic rock that is, that is jamming right? And that is true. I will say One of the things about the show is that they do go back to a lot of the soundtrack of The Karate Kid, which is amazing, but they also because it is a low budget show. They'll refer to guns and roses and then play rat. But they also do you talk about rats like there's a difference. Alright, eso my reaction to this and I said this when I wrote about it was surprisingly, not terrible. What did you think, Stephen? I found it instantly. Venjah ble. I found myself maybe 5, 10 minutes into this show before I thought, you know, even if I weren't covering this for pop culture Happy hour. I'm gonna watch this whole thing on. It's weird. I think it speaks to the kind of enduring power of the original from 1984 which imprinted very, very deeply on my psyche and kind of the way I view bullies in general. I can watch bullies get kicked in the face. Absolutely, infinitely. Like I could just watch an infinite loop of Johnny Lawrence getting Crane kicked in the face forever. And this show kind of gives you the opportunity. Toe watch, Johnny Lawrence get re crane kicked in the face. Ah, bunch of times. But it weirdly goes deeper than that. You see these two guys, Johnny Lawrence and Daniela Russo? Bad guy, Good guy. You know, 30 some odd.
Up Next
Popular Playlists
Best Yoga Podcasts: Listen & Learn New Poses Sour Shoe's Greatest Moments on The Howard Stern Show Listen to: Top 15 Funniest Barack Obama Quotes 9 Game Design Podcasts Every Game Designer Needs to Hear 7 Podcast Episodes About The Golden State Killer That Will Keep You Up at Night David Parker Ray & Shocking Audio of the Toy Box Killer You Need to Hear Best UFO Podcasts That Will Abduct Your Mind Controversial Joe Rogan Experience Episodes Audio Wack Packer Beetlejuice Best Moments on The Howard Stern Show Best NoSleep Podcast Episodes To Terrify You Sexy ASMR Audio to Turn You On
Popular Categories
ASMR Business & Tech Cannabis Fashion & Beauty Gaming History Home & Garden Kids & Family Spirituality Travel
Add to playlist
New playlist