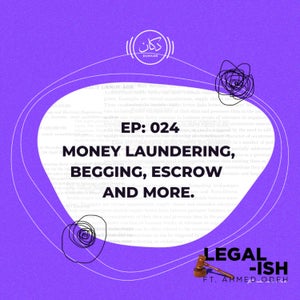 Share
station description Legal-ish is a weekly podcast where hosts OT & Reem invite their lawyer and legal a... read more

Are you a money launderer? Join us on an exciting new episode on #LEGALISH, where we answer our listeners legal questions with Ahmed Odeh.This Week’s Questions:
“My sister got fired after a misunderstanding with her supervisor. She was told to leave the premises. They kept promising that they will p
Category: Legal
Publish Date: Aug 25, 2021
Tagged in this Audio:
More
Jump to Full Description
Snippets are a new way to share audio!
You can clip a small part of any file to share, add to playlist, and transcribe automatically. Just click the to create your snippet!
Snippets: Clips of E024: Money laundering, begging, escrow and more. that people like

There are currently no playlists containing this audio.
Add this audio track to one of your playlists
Add to Playlist
Up Next
Full Description
Back to Top
Are you a money launderer? Join us on an exciting new episode on #LEGALISH, where we answer our listeners legal questions with Ahmed Odeh.This Week’s Questions:
“My sister got fired after a misunderstanding with her supervisor. She was told to leave the premises. They kept promising that they will process her visa. But till today, they have not. Now they're saying they can't pay for half the month that she worked because they had to make uniforms for her. What can she do?”
“I was waiting for a bus near Hor Al Anz area at approximately 7pm. As I was waiting for the bus, a car pulls up, an Audi car to be more specific. In the car, there's a family of three small children, a lady and her husband. The guy is a well dressed gentleman in formals and has a golden bracelet, who calls to me. At first I thought that he may be calling me for directions. So obviously I moved a little closer to the window. He asked me if I spoke Hindi or English. And I told him I speak Hindi. He begins by saying that he lost his wallet and is really ashamed to be telling me this, but he also does not have much petrol in his car left. At that point, I don't even know what was happening, cause this was something new. Then he tells me that his children are hungry, and by then I told him that I just carry a credit card, and I don't carry cash with on me, so I left. But it was a strange encounter. Then the next day I told my co workers about it, who told me that begging is illegal in the UAE. What is the legal or right thing to do in this situation?”
“I run an import and export business here in Dubai, we mainly deal in high end luxury cars. I was recently contacted by someone in Europe, who saw some cars I posted, we talked about cars, and we were ready to close the deal. And the price of the cars listed totaled out to be $ 500,000. The customer sent me $5 million. Or he said he was gonna wire $5 million. He told me to take $500,000 from the $5 million, and use the rest to invest in my business and share the profits with him. I want to come to an agreement with him where I use the money to purchase $4.5 million worth of cars, and resell or export them and split the profits with them. My assumption is that he may be money laundering, or laundering his money through my business. If I was to take his money, would I be considered a money mule? What type of legal trouble can I get into?”
Bonus question: “Services that we use like, for example, fiverr.com or upwork.com. Where you would hire a graphic designer for example, to do a service for you, or a podcast editor to edit an episode. Usually, that fund is held by the website until the job is completed, and you're happy with it, then they release the payment to the supplier. Does that count as an escrow?”
Send your questions to hello@dukkanmedia.com or slide in our DMs, and we promise to keep it anonymous.Check out the episode on your favorite podcasting platform.#WeCauseCultureHosted by OT, Reem, and Ahmed Odeh, Legal-ish is brought to you by the audiophiles at Dukkan Media.
Up Next
Add to playlist
New playlist