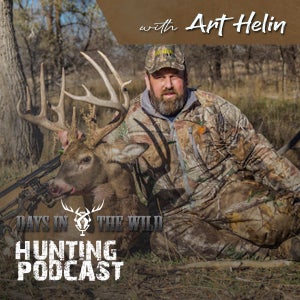 The early season can be a critical time when it comes to deer hunting. Art Helin has been hunting whitetail for most of his life, and he’s learned a lot about how the deer behave throughout the season.

You have to remember, these deer are sm
Category: Hunting & Fishing
Publish Date: Sep 27, 2021
Tagged in this Audio:
More
Jump to Full Description
Snippets are a new way to share audio!
You can clip a small part of any file to share, add to playlist, and transcribe automatically. Just click the to create your snippet!
Snippets: Clips of Early Season Whitetail with Art Helin that people like

There are currently no playlists containing this audio.
Add this audio track to one of your playlists
Add to Playlist
Up Next
Full Description
Back to Top
Early Season Whitetail with Art Helin

The early season can be a critical time when it comes to deer hunting. Art Helin has been hunting whitetail for most of his life, and he’s learned a lot about how the deer behave throughout the season.

You have to remember, these deer are smart animals. They’re really good at noticing small changes in their environment. Art talks about how to use tree cameras to stay out of the deer’s area, so that you don’t put pressure on them too early in the season and make them move to a new safe zone. He’s even got stories about deer spotting his trail cameras, and he brings up an important point: you’ve got to deal with the scent of your cameras before you take them out into the woods.

There is a second approach, though. Art and I have noticed that deer will get so used to humans that they will even bed down in people’s yards! So if you’re lucky enough to own the land that you hunt on, spend a lot of time in the field so that the animals will get used to you and not immediately respond to you as a threat.

And just like timing is important in the season, it’s also important on the hunt itself. Art shares a story about a time when he rushed his calls and spooked a deer, which he never ended up being able to take down. The trick is to really know your calls, so that you know when to use which one. The animals are expecting to hear certain noises at certain times, so do your homework and learn those timings and patterns.

How to approach the early season.

Two ways to prep: stay away, or let the animals get used to you.

How to de-scent your trail cameras before putting them out.

Which deer calls to use and when.


Mentioned in this episode:

Days In The Wild