Your changes have been saved
All Audio The Rhino Podcast

From Audio: RAMONES "ROCKET TO RUSSIA" with guest Ed Stasium

Start Time: 10:52 End Time: 15:33
Ed Stasium speaks with Rhino Podcast about what is on the box set re-issue, how good the Ramones sounded for the Scotland show included in the Rocket to Russia Box set, and describes their "club show career"
Category: Documentary Musicians Talk
Publish Date: Dec 28, 2020
Snipped By:
Share
station description Ed Stasium is an independent record producer and engineer. over the course of his 3... read more 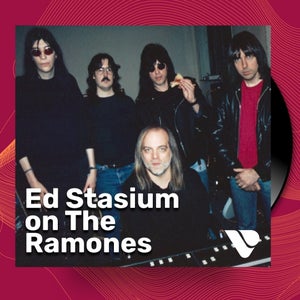 Ed Stasium Audio Playlist on the Ramones
41:57 12/27/20 14 audios
Up Next
Full Description
Back to Top
Ed Stasium speaks with Rhino Podcast about what is on the box set re-issue, how good the Ramones sounded for the Scotland show included in the Rocket to Russia Box set, and describes their "club show career"
Transcripts
Back to Top
mix around the room mix and it's there. No guitar overdubs, just the band Johnny, Joey and Tommy just roaring. And there were there were a peak performance at that particular time. The tracking mix is the band live in the studio. You can really hear the room mix in this new mix. Fortunately, we had at least 2 to 3 tracks of Joey because we double tracked him a lot. There was some extra tracks, so I made some compilation vocal for these new mixes as well, and it's very exciting. I think the fans are gonna really love it. It's It's Ramones, all Ramones all the time. Ramones balls to the wall. So Ramones always thought of the fan. So I wanted to keep that in mind, and I have. You know, I I knew the guys intimately. Really. I hear their voices in my head, you know, giving me suggestions as to what to dio for these new mixes. It's raw, it's in your face. So we have the original album, which we re mastered. It just sounds great. I love those mixes. I love this record and always looking for stuff for the fans. It's really great that during looking at the multi tracks, I always had thought that the version of I Don't Care That was on Rocket to Russia was one that we had recorded at Media Sound because I remember recording it there. But when I did a little more research and little more listening into it, the version of I Don't Care That's On Rocket to Russia is actually the B side of Sheena that were recorded Son Dragon that same day the same day. Yeah, which the multi tracks are actually missing. For those, I might add, they have their m i a Can't find them. There was a version of I Don't Care That I used in the tracking mix It Z never been released before. That version of the tracking mix of I Don't Care is brand new, never been heard before its world premiere done the same way as the rest of them. And also there is a version of It's a long Way back to Germany that we cut for a rocket to Russia that was never used. We re recorded that song for road to ruin, and so we have a long way back to Germany we have one version with Joey's vocal. There's also a version with DDS vocal on the second CD. No Way, Get Your Way, the December 1977 show from Scotland. This happened a few days before it's alive was recorded. Were you following the band on tour and capturing multiple recordings? Yes, we recorded five or six shows. I couldn't make this particular show, so I didn't record it. And it shows, Uh, you know, the culmination of it was, of course, at the Rainbow Theater in London, which we we used for its alive. That's what we That's the show that we used. We didn't use any of the other one, so it's great this this has never been released before and it's a kick ass show. It sounds when I pulled it up and listen to was like, Whoa, they were amazing. I might say that they were very consistent with their shows. The sets were consistent, and at this particular juncture in the Ramones career, they were red hot. They were very consistent in this shows, you know, I was at those five or six shows and they knocked him out. They were regiment, you know, they were trained to do this. It was like an army. The Johnny Ramone Army. Yeah, and they used to practice before the gigs. I don't know if you're aware of that, but they used to do about a half hour set in their dressing room, and they would go over like, 20 or 30 minutes of a set before they were right before they would go on stage. December 77 was was the band drawing bigger crowds in the UK and they were in the States huge, huge and rabbit fans. You can tell by the audience tracks. So they were just going crazy for the Ramones. Love them much more loved all over the world in South America as well. Throughout their entire career, they did their gigs in the States, but they were playing clubs pretty much up until the end. You know, they had a couple of big shows like the you Know, the Law Blues of the Tour and Escape from New York Tour with Tom, Tom Club and Blondie, and they played larger venues, but they're they're always doing the club thing. That they weren't appreciated as much in the United States is they were appreciated in Europe and the UK in South America, it's a shame that they didn't see the huge success.
Up Next
Popular Playlists
Best Yoga Podcasts: Listen & Learn New Poses Sour Shoe's Greatest Moments on The Howard Stern Show Listen to: Top 15 Funniest Barack Obama Quotes 9 Game Design Podcasts Every Game Designer Needs to Hear 7 Podcast Episodes About The Golden State Killer That Will Keep You Up at Night David Parker Ray & Shocking Audio of the Toy Box Killer You Need to Hear Best UFO Podcasts That Will Abduct Your Mind Controversial Joe Rogan Experience Episodes Audio Wack Packer Beetlejuice Best Moments on The Howard Stern Show 12 Best Episodes of the NoSleep Podcast to Keep You Up at Night Sexy ASMR Audio to Turn You On
Popular Categories
ASMR Business & Tech Cannabis Fashion & Beauty Gaming History Home & Garden Kids & Family Spirituality Travel
Add to playlist
New playlist