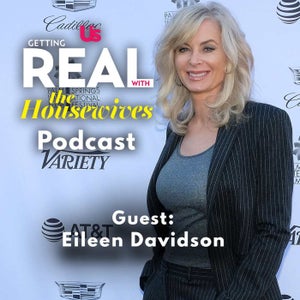 Share
station description ‘Getting Real with the Housewives’ is your one-stop destination for all your Housew... read more

Us Weekly's Getting Real with the Housewives
341 Listens
Duration: 01:44
Play Audio
Add to Playlist
Share Report

Start Time: 12:19 End Time: 14:03
Eileen Davidson discusses her perspectives on the Erica Jayne situation
Category: Entertainment TV
Publish Date: Sep 24, 2021
Snipped By:
Share
station description ‘Getting Real with the Housewives’ is your one-stop destination for all your Housew... read more

Us Weekly's Getting Real with the Housewives
Tagged in this Audio:
More
Jump to Full Description Transcript
Playlists that Eileen Davidson: Watching ‘RHOBH” Cast ‘Crucify’ Erika Jayne is ‘Uncomfortable’ appears on.

There are currently no playlists containing this audio.
Add this audio track to one of your playlists
Add to Playlist
Up Next
Full Description
Back to Top
Eileen Davidson discusses her perspectives on the Erica Jayne situation
Transcripts
Back to Top
obviously if you're somebody that's willing to kind of go there, that's probably better for the show, right? Definitely. How do you think? Do you think lisa is being a good friend to Garcelle this season so much goes on behind the scenes again. I'm commenting like a viewer and I can't do that. I just I know too much about the behind the scenes stuff so if they could be best friends as far as I know by now, I don't know is it so weird watching the show as somebody that was on it because you know, all the ins and outs of everything? Um well like I said, I I don't see it the same way a viewer does. I'm always like, oh that sounds like this or that looks like that or I wonder how that happened and you know because I mean I've been there, right. Did you ever want to pull the bravo bravo bravo card? I I have seen it happen and um I'm trying to remember if I ever did. I mean it probably never aired but sure, who else did it? Yeah, we all did at some point when we were talking about things that we don't want to be on tv interesting entertaining where you got a shock that they actually aired that with Denise then. Oh yes, actually I kind of was but you know with with everything in life. I mean it's certainly reality tv it has to evolve. I mean is there one moment from the show that you wish you could do over again or something that you ever regret. Oh sure. I mean it probably a lot of things I don't even know where to begin. I mean now that I know more sure I go God, I was like I said, lisa never talked about how dumb we were. There's certainly things that I would have done differently. I can't think of anything specific. But I mean, no doubt. No doubt. Yeah. Do you and Brandi ever talk about the Weinstein? Yeah. No. Yeah, but not recently, Right. You know, you mentioned Before how relationships changed and things like that. I know that you and your husband recently celebrated 18 years together. Congratulations. That's
Up Next
Popular Playlists
Best Yoga Podcasts: Listen & Learn New Poses Sour Shoe's Greatest Moments on The Howard Stern Show Listen to: Top 15 Funniest Barack Obama Quotes 9 Game Design Podcasts Every Game Designer Needs to Hear 7 Podcast Episodes About The Golden State Killer That Will Keep You Up at Night David Parker Ray & Shocking Audio of the Toy Box Killer You Need to Hear Best UFO Podcasts That Will Abduct Your Mind Controversial Joe Rogan Experience Episodes Audio Wack Packer Beetlejuice Best Moments on The Howard Stern Show Best NoSleep Podcast Episodes To Terrify You Sexy ASMR Audio to Turn You On
Popular Categories
ASMR Business & Tech Cannabis Fashion & Beauty Gaming History Home & Garden Kids & Family Spirituality Travel
Add to playlist
New playlist