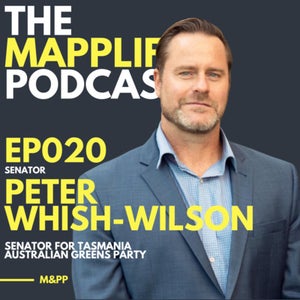 In 2012, Pete became a Greens senator for Tasmania when he replaced Bob Brown in the Senate. He was re-elected at the 2013 election and 2016 double dissolution election.
As a lifelong passionate surfer, Pete has a deep and abiding passion for the ocean. Over the last eight years, he has led politica
Category: Health & Wellness
Publish Date: Oct 12, 2021
Tagged in this Audio:
More
Jump to Full Description
Snippets are a new way to share audio!
You can clip a small part of any file to share, add to playlist, and transcribe automatically. Just click the to create your snippet!
Snippets: Clips of EP020 - SENATOR PETER WHISH-WILSON - Senator for Tasmania | Australian Greens Party that people like

There are currently no playlists containing this audio.
Add this audio track to one of your playlists
Add to Playlist
Up Next
Full Description
Back to Top
In 2012, Pete became a Greens senator for Tasmania when he replaced Bob Brown in the Senate. He was re-elected at the 2013 election and 2016 double dissolution election.
As a lifelong passionate surfer, Pete has a deep and abiding passion for the ocean. Over the last eight years, he has led political campaigns opposing Japanese whaling and illegal fishing, industrial super trawlers entering Australian waters, the environmental damage from industrial salmon farms, the impacts of plastics and micro-plastics on marine life and the devastation to marine ecosystems caused by shark nets and drum lines.
Pete’s passion for the environment runs deep. He became a community leader in the decade-long campaign against the Gunns Tamar Valley Pulp Mill, one that eventually saw the power of a community win out over powerful vested interests.
An economist by training, he spent the early years of his career as a young stockbroker in New York in the World Trade Centre just years before the tragedy of 9/11. Before that he graduated from ADFA, was a labourer in the WA mines, spent nearly a decade lecturing at the University of Tasmania, and running his own award-winning wine business.
With the invasion of Iraq in 2003, Pete joined the massive anti-war protests that were happening across the country, his first ever experience at a protest. In 2004, when it was announced that the proposed Tamar Valley Pulp Mill would dump up to 30 billion litres of toxic industrial waste into Bass Strait and clear fell 4 million hectares of native forests annually, Pete knew he had to get directly involved. Forestry giant Gunns Ltd joined forces with the Tasmanian Government and threw everything it had at pushing approvals for the mill through. After a lengthy battle, the company abandoned the project, all thanks to a grassroots community campaign which mobilised a tide of public opinion against the mill.
The takayna/Tarkine rainforest is something that, as a Tasmanian senator based in the north, he is particularly concerned about. The takayna/Tarkine is the very symbol of what is special and unique about Tasmania, but it is currently under threat from logging.
Pete has also spent much of the past eight years working to build policies for the Greens in economics and finance. His work in parliament has helped achieve strong multinational tax avoidance laws, successfully establish the Royal Commission into banking and the subsequent once-in-a-generation legislative reform agenda following this.
The challenge to tackle the climate emergency is now at the forefront of much of Pete’s work. He sees the huge fight ahead as one that recognises and restores our biodiversity, curbs emissions and leaves failed business models behind. Responding to the climate emergency offers a huge opportunity to create a blueprint for investing in future generations.
Follow Peter –
Instagram: instagram.com/senatorsurfer
Twitter: twitter.com/SenatorSurfer
Office
37 George St,
Launceston TAS 7250
Postal
PO Box 5194,
Launceston TAS 7250
Phone 03 6331 0033
Fax 03 6331 2044
Email senator.whish-wilson@aph.gov.au
Up Next
Popular Playlists
Best Yoga Podcasts: Listen & Learn New Poses Sour Shoe's Greatest Moments on The Howard Stern Show Listen to: Top 15 Funniest Barack Obama Quotes 9 Game Design Podcasts Every Game Designer Needs to Hear 7 Podcast Episodes About The Golden State Killer That Will Keep You Up at Night David Parker Ray & Shocking Audio of the Toy Box Killer You Need to Hear Best UFO Podcasts That Will Abduct Your Mind Controversial Joe Rogan Experience Episodes Audio Wack Packer Beetlejuice Best Moments on The Howard Stern Show Best NoSleep Podcast Episodes To Terrify You Sexy ASMR Audio to Turn You On
Popular Categories
ASMR Business & Tech Cannabis Fashion & Beauty Gaming History Home & Garden Kids & Family Spirituality Travel
Add to playlist
New playlist