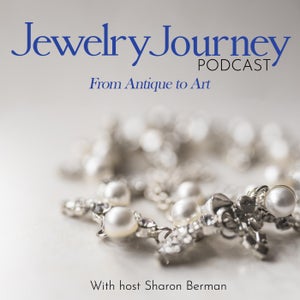 What you’ll learn in this episode: Why Marc’s box art jewelry was inspired by his time working in the theater industry How Marc went from selling his work on the streets of New York City to selling them to Hollywood’s biggest celebrities Why artists have always borrowed from each other’s work Why b
Category: Fashion & Beauty
Publish Date: Oct 11, 2021
Tagged in this Audio:
More
Jump to Full Description
Snippets are a new way to share audio!
You can clip a small part of any file to share, add to playlist, and transcribe automatically. Just click the to create your snippet!
Snippets: Clips of Episode 132: Every Box Tells a Story: Marc Cohen’s Box Art Jewelry with Art Jeweler, Marc Cohen- Part 1 that people like

There are currently no playlists containing this audio.
Add this audio track to one of your playlists
Add to Playlist
Up Next
Full Description
Back to Top
What you’ll learn in this episode: Why Marc’s box art jewelry was inspired by his time working in the theater industry How Marc went from selling his work on the streets of New York City to selling them to Hollywood’s biggest celebrities Why artists have always borrowed from each other’s work Why box art is a conversation starter that breaks down barriers How every box tells a story Additional Resources: Instagram Photos: Museum of Israel Exhibition  Currently on view at SFO Airport  Marc Cohen and Lisa Berman (no relation)  About Marc Cohen: Marc Cohen is a highly regarded artist known for his wearable box art. As a former actor, stage manager and set designer, Cohen’s two-inch-square boxes resemble stage sets with three-dimensional figures and images. His one-of-a-kind pieces sit on the shelves of numerous celebrities and can be worn like a brooch or pin. The archive of Cohen’s work is housed at California art jewelry gallery Sculpture to Wear. Transcript: Inspired by his time in theater and created to resemble a stage, Marc Cohen’s box art pieces are well-known among rare jewelry lovers and Hollywood’s most famous artists, actors and producers. Part three-dimensional art, part jewelry, the two-by-two boxes feature images and tiny figures that reflect our world. He joined the Jewelry Journey Podcast to talk about his process for creating box art; what it was like to work with theater greats like Tom O’Horgan and Paula Wagner; and why his pieces are more than just shadow boxes. Read the episode transcript for part 1 below.  Sharon: Hello, everyone. Welcome to the Jewelry Journey Podcast. Today, my guest is Marc Cohen. Marc is a former actor, set designer and stage manager. He is a highly regarded artist recognized for his box art, which graces the shelves of many celebrities. The box art pieces are often worn as brooches. We’ll hear all about his jewelry journey today, but before we do that, I want to thank Lisa Berman of Sculpture to Wear for making it possible for Marc to be with us today. Marc, so glad to have you. Marc: As am I. Thank you for inviting me. Sharon: Great to be with you. Tell us about your jewelry journey. It started with you traveling around the world from what you’ve said. Tell us about that and how everything worked from there. Marc: I was a 20-year-old young man and I left America, basically, on a freight ship. That’s how I started the journey. I have a saying now, which is “Every box art tells a story.” The irony of that is that when I travel, because I was on the road for a very long time, going all over the world, I liked collecting things but I had no place to put them. I found these little, tiny boxes that I used to take candy out of, and when they were empty, I went, “Oh, this is a great thing to put little things inside of.” I already was starting the idea of collecting little objects that I might go back to at some point and use it as a part of the art. But I traveled; I went around the world all the way to India until 1970. Then in 1970, I decided to return to America and relocate myself within the country. Prior to that, I had left in 1966. It was during the Vietnam War.  I was raised in Southern California, so I came back to America and went back to my roots. I have a stepsister, and she had a friend named Tom O’Horgan. Tom O’Horgan is actually very famous in the theater world, primarily because he directed the show on Broadway called “Hair.” He directed many other shows after that, but that is the one he's most known for. In meeting each other for the first time, he asked me about myself, and I said, “I traveled around the world and I don’t have any real direction about what I want to do next.” He said, “Well, I need a driver because I’m working on these film projects. Do you drive?” and I said, “Yeah, I drive.” So, he hired me as a driver.  During that period, which was in the mid-70s, I drove him around Los Angeles. I knew Los Angeles like the back of my hand, and we went to all these different studios and met all these different, incredibly famous people; directors, writers and the like, actors and so on and so forth. I was getting a little bit of a background, but what I didn’t know at the time, not until many years later, was how I ended up becoming a curator and jewelry maker. I was influenced by the work of Tom O’Horgan. Being a set dir
Up Next
Add to playlist
New playlist