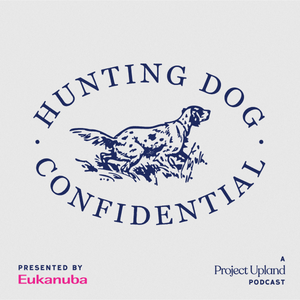 Anthony Williams is the epitome of versatility when it comes to the bird dog world. Growing up in Queens wasn’t going to dissuade him from his goals of hunting, running bird dogs, and flying a hawk. His initial exposure to birds was raising pigeons in urban New York, followed by his first experience
Category: Hunting & Fishing
Publish Date: Sep 01, 2021
Tagged in this Audio:
More
Jump to Full Description
Snippets are a new way to share audio!
You can clip a small part of any file to share, add to playlist, and transcribe automatically. Just click the to create your snippet!
Snippets: Clips of Episode 26: Hawking and Bird Dogs with Anthony Williams that people like

Best Anthony William Interviews on Podcasts or Audio about Anthony
32:14:30 9/21/21 30 audios
Up Next
Full Description
Back to Top
Anthony Williams is the epitome of versatility when it comes to the bird dog world. Growing up in Queens wasn’t going to dissuade him from his goals of hunting, running bird dogs, and flying a hawk. His initial exposure to birds was raising pigeons in urban New York, followed by his first experiences with falconry in an overgrown junkyard. This eventually led him toward bird dogs, where Anthony developed a love for the versatile breeds and also became a hound trial judge. Now, he has wirehaired Teckels, a Drahthaar, and a wirehaired Vizsla in addition to his hawks.   We follow a few rabbit trails with Anthony in discussing raising pigeons in the inner city, including pigeons that race and those that perform somersaults in the air. Many of us become familiar with pigeons during the course of training a pointing dog, but raising and competing with pigeons is a whole universe unto itself.   Turning to falconry, we discuss the various aspects of hunting with a bird of prey and how different species are particularly well-suited for different game and terrain. For example, hawks make great urban or suburban birds, but falcons are at their best when given lots of room to fly on the prairie or in the desert. Even the way in which the birds attack and kill their prey is different between species, so knowing your quarry is a key part in deciding which facet of falconry is right for you.   As always, we explore some of the unique language around falconry, such as the difference between hawking and falconry, why a male hawk is called a tiercel, and how the term “bird dog” actually refers to falconry rather than the pursuit of game birds.   Returning the discussion to dogs, we discuss the role of a dog in a partnership with a raptor and how it differs from hunting over a dog with a shotgun. We talk about the traits that work well and those that don’t, what’s expected of the dog, and how to train them for the task of hunting for a hawk or falcon.   Finally, Anthony shares some candid advice and wisdom on how to decide if you’re really up for the commitment of falconry—and if you’re serious about it, where to start learning more and taking your first steps toward becoming a falconer.   As always, we thank you for listening and invite you to submit feedback or questions to us at HDC@northwoodscollective.com. We would love to feature your questions in an upcoming episode! Record a voice memo and email it to us to be featured on the show and to have your question answered.   Share | Comment, review and discuss this episode of the podcast in our Project Upland Community Facebook group.   Enjoy the show and don’t forget to rate, review, subscribe, and share this podcast.   Hunting Dog Confidential is presented by Eukanuba Premium Performance Dog Food and supported by Dakota 283, Syren USA, SportDOG Brand and Kent Cartridge.
Up Next
Popular Playlists
Best Yoga Podcasts: Listen & Learn New Poses Sour Shoe's Greatest Moments on The Howard Stern Show Listen to: Top 15 Funniest Barack Obama Quotes 9 Game Design Podcasts Every Game Designer Needs to Hear 7 Podcast Episodes About The Golden State Killer That Will Keep You Up at Night David Parker Ray & Shocking Audio of the Toy Box Killer You Need to Hear Best UFO Podcasts That Will Abduct Your Mind Controversial Joe Rogan Experience Episodes Audio Wack Packer Beetlejuice Best Moments on The Howard Stern Show Best NoSleep Podcast Episodes To Terrify You Sexy ASMR Audio to Turn You On
Popular Categories
ASMR Business & Tech Cannabis Fashion & Beauty Gaming History Home & Garden Kids & Family Spirituality Travel
Add to playlist
New playlist