Exploring a manganese nodule field in a deep-sea submarine

The Deep-Sea Podcast
Tagged in this Audio:
More
Jump to Full Description Transcript
Playlists that Exploring a manganese nodule field in a deep-sea submarine appears on.
Share 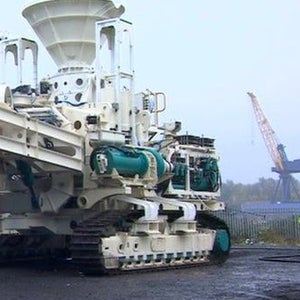 Deep-Sea Mining: A Look At Both Sides of the Issue
03:08:40 5/2/21 10 audios
Up Next
Full Description
Back to Top
Marine scientist Professor Alan Jamieson and sub-pilot Tim MacDonald explore a manganese nodule field and find it a very spooky place.
Transcripts
Back to Top
the fractures almost cool because the fractures one was a real mixed bag of stuff at the bottom of the fractures on itself is very soft sediment. There's a whole bunch of different species level in there and then the walls of the fractures all were basically are unbelievably dense manganese poly metallic nodule field, which was one of the spookiest things I think we've ever done. Remember cruising along in the sub around 6000 m, sort of manganese nodule fields, listening to dead bodies everywhere by cars thinking things don't get any weirder than this. Yes, I think it was the one time I've been in a suburb of thought. I don't like it here, I want to go home. It was just unbelievably. It's too speaking, I. D. Y yes, very eerie. And the eyes just couldn't understand what was going on. Just all the gray scale, the black and the white black manganese nodules and this white sediment. And they were just the first place we came down and was just this most unbelievably dense, perfectly uniform field of perfectly round manganese nodules as far as you can see with the lights. And it was so disorientated and you just got to some points during the dive, alan and I would just have to stop the sub and be like my eyes just can't comprehend what is happening out there. We just need to stop for a minute. Let our film is like snow blindness is yeah, it's the great scale of all your your I start to make the highlights and the lowlights shift. Yeah. So rather than being like someone's lost a billion cannonball, suddenly start to look like a billion dimples and the sea floor and stuff like that really plays with your eyes.
Up Next
Popular Playlists
Best Yoga Podcasts: Listen & Learn New Poses Sour Shoe's Greatest Moments on The Howard Stern Show Listen to: Top 15 Funniest Barack Obama Quotes 9 Game Design Podcasts Every Game Designer Needs to Hear 7 Podcast Episodes About The Golden State Killer That Will Keep You Up at Night David Parker Ray & Shocking Audio of the Toy Box Killer You Need to Hear Best UFO Podcasts That Will Abduct Your Mind Controversial Joe Rogan Experience Episodes Audio Wack Packer Beetlejuice Best Moments on The Howard Stern Show Best NoSleep Podcast Episodes To Terrify You Sexy ASMR Audio to Turn You On
Popular Categories
ASMR Business & Tech Cannabis Fashion & Beauty Gaming History Home & Garden Kids & Family Spirituality Travel
Add to playlist
New playlist